Recently I had to write a lot of T-SQL code and I decided to approach the task of unit testing it as rigorously as possible. There are several T-SQL test tools available that seem to follow the model established by unit test tools from languages like Java and C#. Some of these are: spunit, Sqltdd, utTSQL, TSQLUnit, etc. I soon realized that in a real life environment there was a need for features that the existing tools were either missing or did not implement in a reliable way. Hence, yet another tool was born: T.S.T. (T-SQL Test Tool).

Eventually I released it as an open source project hosted at http://tst.codeplex.com. At the same place you can find complete documentation and samples. A 5 minutes video demo is also available at http://www.youtube.com/watch?v=uGkGSkoh-CE

Here are some of the areas where T.S.T. improves upon:

You can download the tool from http://tst.codeplex.com. There go to the "Downloads" tab, and click on the link under "Downloads & files". Extract the content of the ZIP file on a local folder. The content contains no binaries - only scripts and documentation. Open a command prompt, go to that location and run "TST.BAT" This will install a SQL database called TST which is all you need to start testing your code.

Playing with the quick start sample

The tool comes with a quick start sample code. This was written to illustrate most of the features that T.S.T. offers. To install the quick start sample database open a command prompt, go to the location where you have TST.BAT and run:

This will install a SQL database called TSTQuickStart that contains sample code and tests. Once this is done, you can treat TSTQuickStart as any regular database that contains T.S.T. test procedures. For example, to execute all the tests contained there, go in the command prompt and run:

The output that results is shown below: 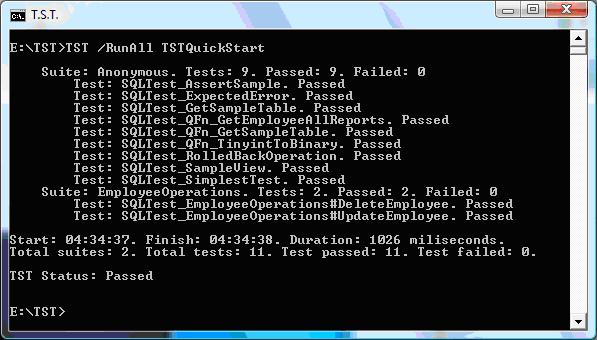 Let's say we have a function called QFn_AddTwoIntegers. As its name suggests it adds two integers. Here is an example of a test for this function:

In the next sections we'll go in more detail about what we may have inside a test procedure. For now it is enough to point out that writing a test is as simple as creating a stored procedure with no parameters and a name prefixed with 'SQLTest_'. The test runners provided by T.S.T. will recognize that stored procedure as a test based on this prefix.
There are similar naming conventions to group tests into suites and to provide set-up and teardown procedures. Let's say that we want to group all the tests regarding the authentication procedures in a test suite called 'Authentication'. The test procedures will be declared as follows:

When T.S.T. is directed to run the suite 'Authentication', it will isolate the procedures above based on their names and will run them in the following order:

Important: Teardowns should be avoided unless there is a need to do more than simply rolling back changes. By default the TST framework automatically rolls back all the changes made in the Setup/Test/Teardown at the end of each test. This makes the teardown unnecessary in most scenarios. The rollback mechanism is described later in this article.

How to run the tests

You can run all the tests in a database in the command prompt by running the command:

You can also trigger one specific suite by running:

To use as an example the names from the previous section:

Or you can trigger one specific test by running:

An example of this would be:

You can also run all the tests in the SQL Management Console by executing a runner stored procedure:

Or you can run one suite by executing:

Or you can run one test by executing:

Using the tool to validate values

Let's take a very simple case where we are going to test a function called dbo.QFn_TinyintToBinary. This function converts an integer to a string containing its binary representation. For example it converts 10 into '1010'. We'll pass in a value, obtain a result and then validate it against its expected result. We will repeat this with several values. To implement this, we create the following test stored procedure:

Using the tool to validate views, stored procedures or functions that return a table

A more interesting case is when we have to validate a table that is returned by a stored procedure or maybe a function or a view. T.S.T. offers a specialized API for this task: Assert.TableEquals. Let's say that we have a stored procedure called GetDirectReports that returns some data about all the direct reports of a manager. Our test procedure may look something like this:

When the table that we validate contains columns that are nondeterministic (like timestamps) we won't be able to predict their 'correct values'. We can exclude those columns from the validation by using an optional parameter of Assert.TableEquals. For example if our table contains two columns called [Create Date] and [Modified Date] we can skip them from the validation by calling:

If we have to validate a table returned by a function instead of a stored procedure then the line:

And if this is a test that validates a view then we will write something like:

Of course, in these two last cases we can explicitly specify the columns that we want to transfer in the table #ActualResult.

Using the tool to validate errors

T.S.T. can be used to validate the scenarios where we expect certain errors to occur:

Note: The API RegisterExpectedError has a few more parameters that allow for a more complex usage.

One of the important issues you will have to deal with when testing T-SQL code is how to clean-up after one test so that the changes it made won't interfere with subsequent tests. The default behavior of T.S.T is to wrap a test in a transaction and rollback all the changes at the end. That includes changes done during the set-up, the test itself and the teardown procedure. And since the roll back is automatic most of the time you should not have to write a teardown procedure at all.

If the code that you are testing does not use transactions or if it does a BEGIN TRANSACTION / COMMIT TRANSACTION, then you are fine and the automatic rollback will work as expected.

T.S.T. will detect the cases where the automatic rollback cannot function as expected. In those cases it will fail the corresponding test with an error indicating what happened. If that is the result of a bug in your test or in your unit under test then you should be able to fix it. If that is the result of a legitimate scenario you have the option of disabling the automatic rollback and do the clean-up on your own in a teardown procedure.

Just to get another idea about the scope of the tool, here is the list of procedures that form the T.S.T. API:

This tool was designed with the idea of making its adoption as inexpensive as possible. It can be triggered from the command prompt, from SQL Management Console or programmatically. It can produce XML results and it is able to run concurrent test session. All these should make the integration with existing build processes simple even for large scale projects. If you have a project that does not have an automated build process you can still run all your tests with only one command. The test runners will detect the test procedures based on naming conventions. This means there is no registration process of the tests so you don't have to incur additional costs maintaining that. Hopefully all these things will make it an attractive tool to use for anyone who wants to automate its T-SQL tests.

Learn how to implement an advanced and cost-effective database unit-testing framework with tSQLt in SQL Server Management Studio.

This post will show the benefits of test-driven development and including automated SQL Server unit testing within your release pipeline. Even if you have a large code base and no existing unit tests, you can start introducing tests now to make your database code more robust to change.

Is It Worth Writing Unit Tests?

What's the overhead for writing unit tests? Ed Elliot breaks it down, looking at the ways in which unit tests both take more time and save time.

Learn how to begin unit testing with tSQLt and SQL Server.