A few months ago my company opened a new call center. One of the issues that we

two call centers. My boss (Andy Warren) decided to use a combination of queued

updates and merge replication. This was running smoothly until last week. For

some unknown reason all of the publications became invalidated. This meant that

re-snapshot. This is no problem for some of our smaller tables but the majority

Andy and I came up with a plan to get this done and I was almost ready to go. I

will). I'm comfortable with snapshot and transactional replication but merge is

a whole new ballgame; one I didn't understand (like croquet).

up, not only do I create more work for my already overworked boss, but I

potentially keep 20+ people from working. Luckily I came through and saved the

day. Well not really, but you get the idea. I learned a few lessons along the

way and I’m a better pseudo-DBA for it.

Here is the plan that we came up with:

Simple as it looks, I learned the hard way that it wasn’t that easy.

In reference to transactional / queued updates publications; tables that exist

re-initialization, have to be present on the subscriber, otherwise the

distribution agent fails. (See error message below). This was perplexing as I

setting was "Drop existing table and re-create it." 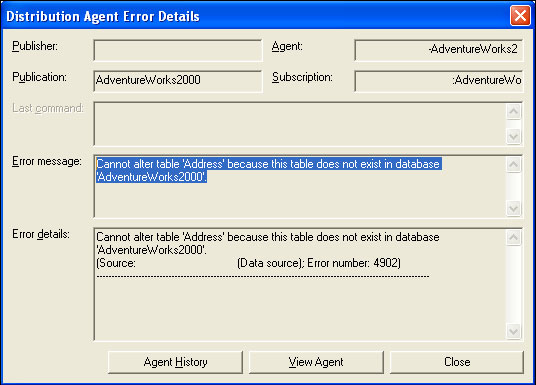 Lesson 2
Again, in reference to transactional / queued replication; the table

the subscription. To solve lesson 1 I created a table with the same name as the

table on the publisher. The distribution agent failed with the

same message above. I created a shell of the table without the

constraints; the distribution agent failed again!!!! What the hell was going

on? I was really irritated at this point. What finally worked was scripting the

all). I started the distribution agent again and I

away. This is kind of obvious, but I was a little surprised how long it really

takes. When I ran the snapshot for the 9 million row table overnight I

woke up to a surprise. In 9 hours only 6.7 millions rows went over. I had to

stop the distribution agent, rename the backup table and recreate the

constraints. Fun, Fun, Fun… Out of sync for a few more days. I finally ran the

snapshot on a Saturday and for some reason the data went over much faster. This

allowed me to run the snapshot for the 14 million row table in the next day.

copy. I’m used to seeing the distribution agent give some type of status of the

merge replication distribution agent does not give any type of status. This

freaked me out for a while. I thought that once again something else went

wrong. Finally, I discovered that if I query the table on the subscriber I

could see the row count.

transactional replication. I thought the only way to keep data synced up

between two tables was to use merge replication. I found out that using

transactional replication with queued updates can accomplish basically the same

columns synced between the two tables. I found the official explanation on the

from the inserted or deleted tables inside the trigger. Similarly, the

WRITETEXT or UPDATETEXT because the data is overwritten by the Publisher.

Instead, you could partition the text and image columns into a

separate table and modify the two tables within a transaction. Use merge

replication to synchronize these values. You cannot be assured there are no

if the data is not well partitioned.

Maybe I should read more articles on sqlservercentral.com about replication.

what I was doing beforehand, but I had Andy to help me along the way. I was

happy with the solution. Whether you agree that it was the best solution is

another matter, it worked. I hope that by reading this you understand the

struggles that an Until next time...Happy databasing!

Andy had a semi-disaster similar to the one he wrote about last year. Interesting to see the kinds of problems that happen to other people. This article raises some interesting points that are outside the scope of basic disaster recovery, looking at how/when to move databases to a different server and how to reduce the server load dynamically.