This is another in an occasional series of short articles about working with SQL Server data in a .Net application, to explain how to work with with SQL Server data, what is possible, and how to work with the issues that can come up. The idea for this article was prompted when I tried to run the examples from the free versions of Visual Studio and SQL Server Express. I thought I would write about the process and maybe save someone else some problems.

I downloaded and installed the free SQL Server Express Edition and Microsoft Visual Studio Community Edition. However, when I looked at the code in Visual Studio I got the dreaded red squiggly line on the SqlClient namespace:

The dlls for the System.Data.SqlClient namespace were not included with the packages that come with Visual Studio Community Edition.

Actually the solution was a lot simpler than I thought it might be: NuGet. NuGet is a code repository supported by Microsoft for sharing code as packages. When I was looking for something else (actually to answer a question in response to my article about the SqlConnection object), I saw an item from a Google search that suggest that the person should use NuGet. I had heard of NuGet and had acually used it before, so that would seem to be a good place to start.

In Visual Studio, I found the manager for NuGet in the Project menu. The option is called "Manage NuGet Packages," as shown in this screen shot. 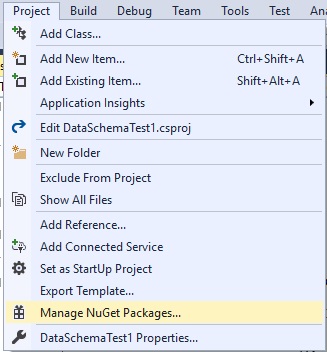 In the Manager, click Browse (is it a tab?) and enter System.Data.SqlClient in the search box. The correct package showed at the top of the list. 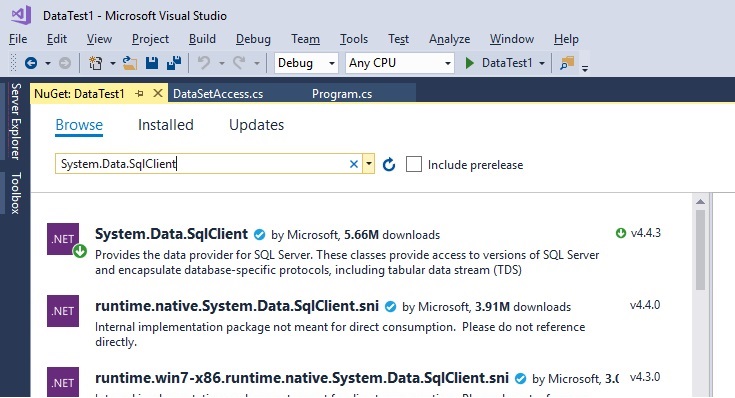 In the image above, the SqlClient item has a green arrow because I had already downloaded it when I took the screen shot. Click to download the package from NuGet.

Now the red squiggly disappears and the code compiles, but there was still a problem when I tried the .Net code to open the connection.

The command times out because the protocol to make the connection to SQL Server Express has not been enabled. So, this requires a change in SQL Server Configuration Manager. In the tree list on the left, open the SQL Server Network Configuration note and select the Protocols for your instance of SQL Server.

I enabled the TCP/IP protocol as shown in this screen shot. According to what I read in the documentation, Named Pipes protocol can also be used but I did not try it. 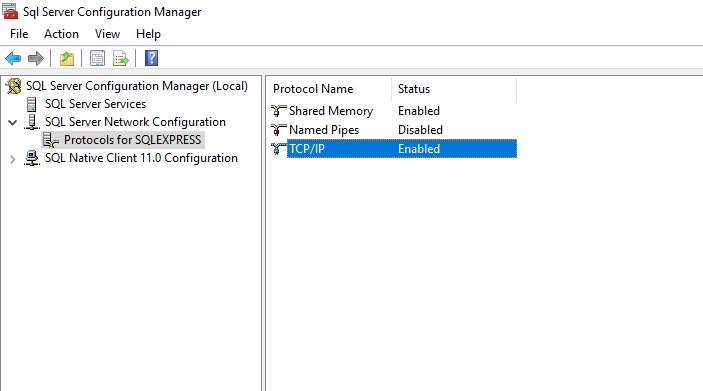 Since in C# the backslash character "\" is used to create Escape Sequences to specify special characters, in the C# code we have to escape the escape character like this:

If your connection string is in a configuration file you do not have to add the escape of the escape. Once the correct data source was in place the connection was opened with no problems and no delays.

Another point that may be helpful. After the trial period for Visual Studio Community Edition ran out I got the message about renewing the license. To re-activate, it turns out you only have to register with Microsoft and the licensing message went away. I guess that's where the "Community" part comes in. Now I get periodic emails, like the one letting me know I have zero points,

Anyway, I hope this is helpful.

A basic introduction for developers (or anyone) about reading the metadata of a SQL Server database from a .Net application.

SQL Server From .Net: Building a DataSet with Code

A basic introduction for developers about working with the DataSet object in ADO.Net to represent objects in a SQL Server database, and some of the options available.

A basic introduction for developers about creating a connection from .Net to SQL Server, and some of the options available.

For some time now, C# programmers have gazed enviously at the interactive capabilities of F#, Python and PowerShell. For rapid prototyping work and interactive debugging, dynamic languages are hard to beat. C# Interactive slipped into view quietly, without razzmatazz, in Visual Studio 2015 Update 1. It's good, it's worth knowing about; and Tom Fischer is intent on convincing you of that.