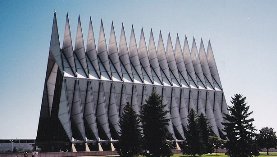 I was thinking to call this the "Military Intelligence Cloud" but no one would believe it was true. Apparently the US Air Force has awarded a contract to build an intelligence platform that will allow different branches of the military and agencies to share data. And, by the way, they will be building a cloud based system.

I'm not sure why the "cloud" is such a buzzword and why everyone thinks it results in cost savings. Supposedly a "private cloud" based system is being used for cost reasons, and because the public cloud services like Windows Azure and Amazon's EC2 might not be secure enough.

It seems that all the press, and all the commercials from Microsoft might be working, and the collective managerial sheep herd is flocking to the cloud as some amazing new change in the way their systems will work. If that's the case, I'm not sure this new cloud service will be any more intelligent a move than and other outsourcing decision.

I think there is promise in a more abstract, more ephemeral type of platform in the cloud, but it seems as thought we might be a long way from actually implementing something like that.

The Cloud in Large IT Shops

There are a lot of advantages for small companies in using cloud services, but is that the case for large IT groups? Steve Jones has a few thoughts.

Google recently promised no limits to their computing engine online. Is that going to change how we use cloud computing? Read Steve Jones' thoughts and give us your opinion.

The outage at Amazon's Web Services recently affected a lot of different companies. However not everyone was affected. The reach of the cloud and the competition for attention means that while we have to learn to expect failures, they are not necessarily evenly distributed.

Steve Jones ends a "Week in the Clouds" with a poll asking if you might have changed your mind about using a cloud version of SQL Server.