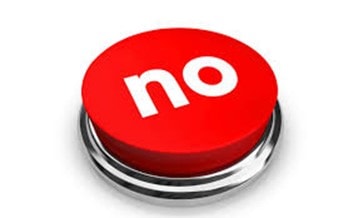 Don’t be afraid of No

How many times have you been afraid to hear “No”?

We have all been there because we have been trained over the years to perceive “No” as a rejection, or we did something wrong. What if that entire concept is wrong? Imagine instead that “No” just means:

Instead of being defeated by hearing “No” take it as a complement. Wait did he just say a compliment? Yes, I did! A compliment that the person saying “No” has the trust and confidence in you to handle hearing no. They did not make up an excuse or try to sugar coat things to make you feel like you are taking home a participation trophy. Would it really make you feel better if you heard them say, “Hey it was a tough decision but for factors that are beyond my control we had to go with the other company” or in your personal life “It’s not you its me”

Let us all be honest with each other for a second and admit while those take away the initial sting all they do is leave too many questions in the long run. Eventually you start asking yourself what could of I have done differently? What would have made a difference? Then that thing called self-doubt starts creeping in and makes you even more hesitant to go after something again.

Want an even more practical reason not to be afraid of No. If your too afraid to hear know you will never hear yes. That is right nothing is a 100% sure thing in business or in life so if you don’t want to hear know then you’ll never ask and then never get the chance to hear yes. I am not naïve and think this is something that is easy and comes naturally, it is the exact opposite our brains get wired after a certain age to fear rejection and feel like we failed. You are not a failure just because you heard no, instead it should drive you to work hard, be more motivated.

So, get out there and put all your effort in everyday because in the end you’ll find that it will bring you happiness knowing you gave it your all and left nothing to chance. STOP making excuses and rather find the answer to “Why should we do it?” rather than “Why shouldn’t we do it?”