A Tale of Four Laptops

With the release of the 22nm Ivy Bridge microarchitecture less than three weeks away, at the end of April 2012, I thought it might be a good time to do my little part to stimulate the world economy by giving people some reasons to consider upgrading to a shiny new Intel Ivy Bridge laptop once they are available. I currently have four laptops available at my house to play with, so I thought I would run a few quick benchmarks on them. These are all fairly recent vintage machines, as you can see in Table 1.

You might be wondering why I have four laptops, which is a good question! The HP Envy 15 is sort of a white elephant, that I paid way too much for when it came out in late 2009. I really wanted a good quality Core i7 laptop for the PASS 2009 Summit, so I bought the HP Envy at Micro Center, and soon discovered that it ran very hot, with pretty dismal battery life (about two hours). It now sits on my hobby desk in the basement, relegated to playing music and web surfing. That is sometimes the price of being an early adopter!

After almost literally getting burned by the old HP Envy, I picked up the Toshiba R705-P25 from Best Buy (since it was a loss-leader OEM model), and originally used it for teaching and presentations, and now for astronomy. It is very light, and has good battery life. About a year later, I picked up a very similar Toshiba R835-P55X from the Microsoft Store in Park Meadows Mall (it was also a loss-leader OEM model). I use it mainly when I speak at big events like the PASS Summit or SQL Connections. Finally, the Dell Precision M4600 is my work laptop from Avalara, which I will have to be sending back in a few weeks. It is a wonderful machine, that is a little heavy compared to the Toshiba Portege.

I case you are wondering what a loss-leader OEM model is, it is simply a specially configured model that a system vendor will make for a large retailer, that the retailer sells for less than a similarly configured model directly from the system vendor. The retailer makes a large purchase of this model, and sells it at a low cost, hoping to make money on accessories, extended warranties, and other silly things like Geek Squad services.

I talked about these systems in a little more detail when I acquired each one, as linked below:

Here is a little more detail about the processors in these four laptops in Table 2.

Table 3 shows the relative performance of these four systems as they are configured right now (after I have done things like adding more RAM or upgrading to a hybrid drive or an SSD). The two Toshiba Portege systems have Intel integrated graphics, which works well enough for daily business use. The Envy 15 has the stock 500GB 7200rpm hard drive, the Portege R705 has a 500GB Seagate Momentus XT hybrid drive, the Portege R835 has a 180GB Intel 520 SSD, while the Precision M4600 has a 256GB Plextor SSD.

Table 4 shows the Geekbench 2.3.0 scores for these four systems. Even the slowest one of the bunch has more CPU and RAM performance than many older production database servers, which shows you the power of Moore’s Law!  You might try using an argument along that line when you are trying to convince your boss that it is time to upgrade your database server. You can ask “How come our mission critical database server has less CPU horsepower than Glenn Berry’s two year old, 3 pound Toshiba laptop?”

So what is the moral of this story? First, we have seen very significant performance increases, with less heat and much better battery life as Intel has rolled out new processor architectures using smaller manufacturing processes over the past two-three years. I suspect that many people reading this have even older hardware than any of my machines, with pretty ancient 90nm and 65nm processors that really ready to be retired.

If you do decide to get an Ivy Bridge system, you really should bite the bullet and get a fast SATA III SSD. Once you have a good SSD, you will never want to use a conventional hard drive again.

Here is CPU-Z for these four systems: 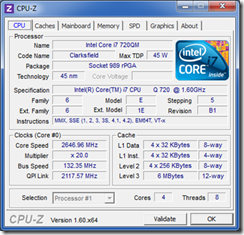 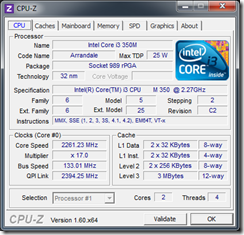 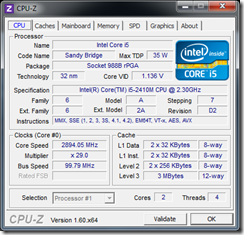 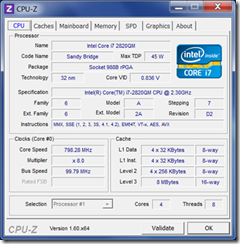 A Thousand Men Marching Still Only March As Fast As One Man.
la·ten·cy - Computers . the time required to locate the first bit or character in a storage location, expressed as access timeminus word time.
Often when talking to people...

Is CPU-Z Risky To Run on a Production Server?

There was a conversation on Twitter recently (with the #sqlhelp hashtag) about whether it was completely safe to run the...

Here is another example CPU throttling from someone who had a server running with the default “Balanced” Power Plan in...

There are two primary relational workload types that SQL Server commonly has to deal with, the first being Online Transaction...

Here is a small selection of useful tools for getting some specific hardware information from any Windows based system you...