Before we get into the implementation of tables, there are several concepts that need to be understood so that you can understand the ramifications of you design choice for tables. These concepts include:

SQL Data Warehouse is a Massively Parallel Processing (MPP) system. Data is distributed across multiple locations across the MPP system referred to as distributions and is fundamental to running queries in parallel to achieve high query performance.

There are two types of nodes with Azure SQL Data Warehouse: Control Nodes, and Compute Nodes

For example, if you select DWU 100, then the 60 distributions are allocated to a single compute node working with a control node. 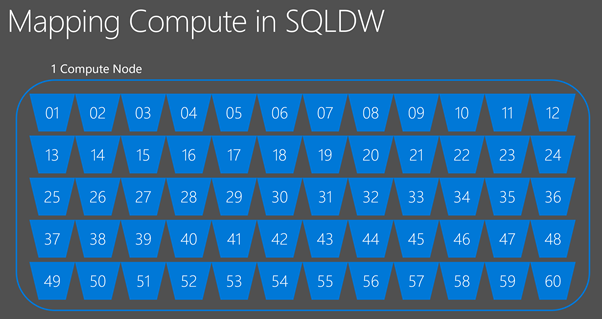 Should you increase the DWU to 200, then the 60 distributions are divided between two compute nodes working with a control node. 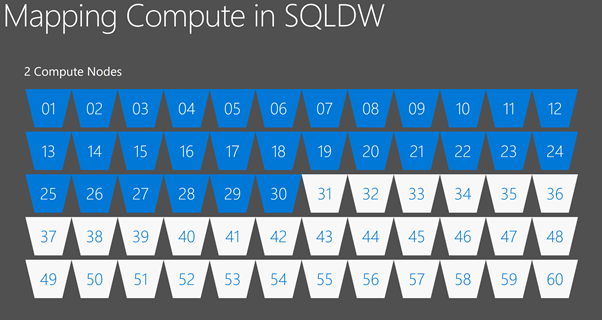 To create a table within Azure SQL Database, we use code very similar to the CREATE TABLE statement for an on premise SQL Server. The difference is we can (or need) to include a WITH clause that specifies specific ASDW options. The following example creates a date dimension table

You can see from the code, that you create a table defining a column name and data type. You can also specify the nullability of a column as well. What is different is what is contained in the WITH clause with the DISTRIBUTION clause. The distribution clause defines how the data will be stored across the distribution in the Azure SQL Data Warehouse and there are two options:

A distribution of round_robin will evenly distribute the data across all the 60 distributions. The benefit of this approach is that the data is evenly spread, but there is no control over where the data is stored. The round_robin distribution works very well when initially loading data into a staging table. By default, tables are Round Robin distributed. This makes it easy for users to get started creating tables without having to decide how their tables should be distributed. Round Robin tables may perform sufficiently for some workloads, but in most cases selecting a distribution column will perform much better.

Therefore, the column that is selected for the hash distribution should be chosen carefully. If a column is chosen on 10 million row table for the hash distribution. Let’s say the City column as an example. And 98% of the records in the City column have a value of Manchester, then there would be an uneven spread of the data across the distributions. This data skew towards Manchester can adversely affect the performance of the Azure SQL Data Warehouse. So you would want to select a column that has relative even distribution of data and a column that won’t be updated. In fact, our friends in the Azure CAT team have written a great article on loading patterns in Azure SQL Data Warehouse, and I highly recommend that you read it.

So, the choice of the distribution method, and the column to be used when a hash distribution is used is vitally important to ensure a performant Data Warehouse. Choose your columns carefully.

See how you can create table in the following video

The logical architecture for the creation of tables still largely remains the same. You can still create star schema, or snowflake schemas with fact and dimension tables.

The Create Table statement in Azure SQL Data Warehouse also supports Indexing and Partitioning. Interestingly, there are subtle variations with the partitioning in particular, but I will save this for another blog. But partitioning can be important in aiding the manageability of data by merging and switching partitions to aid the fast loading of data.

Statistics also play an important role in aiding query execution plans. However, it should be noted that at the time of writing, the statistics are not updated on the control node. So, it is best practice to create statistics on specific columns that aid querying so that the information is up to date for the query optimization process.

In this series, we have also covered the following topics:

This time we will show how to access to Azure SQL Data Warehouse using Excel.

In this article, we will show how to create a WPF application and show how to insert data to ASDW.

Learn about Azure SQL Data Warehouse and how to get started.