Bitwise operators can be challenging to manage at first. However, with practice and patience, and under the right conditions, these operators can provide remarkable performance improvements in production environments. This article will compare two methods of accomplishing the same output, one with a normalized model and the other with bitwise operators. In essence, bitwise operators allow you to denormalize a portion of your database (whether you actually denormalize or not is not important).

Generally speaking, bitwise operators can provide great benefits in OLTP databases that either:

The usual issue with bitwise operators is that they only operate with the type int (actually, they work with the bigint type as well), limiting their usefulness for large referenced tables (usually, bitwise operators can be used when the referenced table has 63 records or less). When dealing with a greater number of records, different options may be available, but potentially at an additional performance cost. These techniques include:

For the remainder of this article, we will use an integer field to store our binary values. The usefulness of this method is still high considering the many applications that can leverage this technique and the performance improvements that can result.

The example we will use is that of a Users and Errors table as such (the scripts to create the tables and data can be found at the end of this article):

To represent a user that has both ErrorId 1 and 3, the UserErrorFlag field should contain the value 5 (sum of the error flags 1 and 4 in the Errors table). We find 5 by using the following table:

By selecting ErrorId 1 and 3, we need to add the binary values for the corresponding flags, which is 0101 (or 5).

The Users table contains 10,000 users and our Errors table contains only four records. The purpose of our example is to return the list of users that contain a specific error number (for instance ErrorId=4). We are creating a stored procedure with an input parameter for the ErrorId we need to retrieve. The procedure (called SP_Example1) should return the list of user names (unique names) that have at least one error (any error) and should indicate by a ‘Yes’ if one of the errors is equal to 4. This field would then be used by a report to display a special icon.

The core of this stored procedure is shown below.

This statement returns 5,000 rows. The following is a sample of the output of SP_Example1:

What is interesting to see is the query plan that SQL Server uses. As you can see, it requires a join, a Table Scan and an Index Seek on the UserErrors table. The key is to note the complexity of the query plan compared to the one using a bitwise operator (more on that later).

Our first test will be to run this procedure 100 times to enhance our visibility on performance differences. To do this, we call the following procedure:

Similarly, we create a second stored procedure (SP_Example2) that returns the same records, this time using the mask as a parameter. So instead of passing the value 4, we send 8 and execute the stored procedure as such:

Here is the core of the stored procedure. This time, there is no need to join.

To use this stored procedure, we need to know the value of the mask to use rather than the ErrorId. This is usually not too hard since key values are stored on front-end applications. Instead of (or in addition to) storing the primary key, the application stores the mask. Since we no longer need to join on the UserErrors table to retrieve the ErrorId value, we now have a very simple T-SQL. The query plan reflects this:

Similarly, we now run this stored procedure 100 times by running the following command:

The following table shows CPU cycles consumed by each test (Test1 and Test2). As you can see, the bitwise calculation clearly reduces the time it takes to obtain the records (CPU in green). The first plateau is obtained as a result of running Test1 and is about 30 seconds in length. In contrast, Test2 takes about 17 seconds to complete under the same conditions: a 40% improvement. In addition, the number of locks requested by SQL Server is also diminished drastically: from 180 down to 5 (Locks Requested by Second in Red). Using the (NOLOCK) hint would of course eliminate all locks requested by the stored procedures. 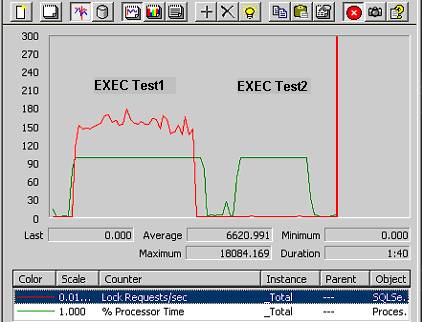 There is one more advantage to using bitwise operators: the capacity to return multiple conditions at once. For instance, if we wanted to return the same information but this time where the ErrorId is 1 and 4 we would execute the following query:

It turns out that this feature is extremely convenient when creating reports, since many reports require combining information. This is achieved at virtually no extra CPU cost.

The results shown above can vary greatly depending on the type of statement you are executing and the number of records in each table. The query selected for these examples reflects what a simple report would require. Also, imagine what this technique can do if you are using bitwise operators for more than one table at the same time (examples for such tables include Errors, State, Age Bracket, Access Rights and many more). You would probably need a binary field for each table, but the performance gains can be drastic.

Although a little complex to master, bitwise operators can serve a great purpose (and even fix some performance problems) when dealing with specific queries that can cause database slowdowns. Reports may be able to benefit greatly from this technique, especially if the reports run on an OLTP database. Using bitwise operators can give you a serious performance boost and can potentially reduce your database locks dramatically. However, implementing bitwise operators in your production environments may require great planning since front-end applications may also have to be changed to accommodate the additional mask values.

The purpose of this article is to give you a working knowledge of how to view and understand query execution plans for SQL Server. This is part 1 in a series of articles that will walk you through understanding execution plans to help you improve your queries.

Programmers can most commonly relate to interface-based programming in their programming language. This is harder to accomplish in SQL Server though. In this article by Chris Cubley, he shows you how to build interfaced-based SQL.

How Dynamic SQL Can Be Static SQL Part 2

This article shows you how to use the CASE function to design single query solutions that have changing results depending on the values you assign to variables. These techniques are extremely useful as alternatives to dynamic SQL.

As you advance in your skills as a Transact-SQL developer or SQL Server database administrator there will come a time when you need to override SQL Server's locking scheme and force a particular range of locks on a table. This article by Randy Dyess shows you how to optimize your queries using table hints.