TempDB growth due to version store on AlwaysOn secondary server

On a not-so-busy day, I received an alert saying tempdb was at 90 percent of the drive size with only 10 percent remaining. This was a SQL Server 2014 instance hosting AlwaysOn secondary databases.

I logged onto the server to check what was running in tempdb. Everything looked normal, and the daily routine queries were running. I checked memory and the CPU, both were fine but the tempdb kept filling. After a while, I ran the below query to see the tempdb space usage.

Here are my results:

I noticed version_store_kb was at 850 GB which caught my attention. At this point, Tempdb had reached a size of 950GB, out of which the Version store was using 850 GB. This indicated there were sessions using the version stores in tempdb. However, when I looked at the active sessions on the server, just the routine queries were running, which in the past had never caused any issues. 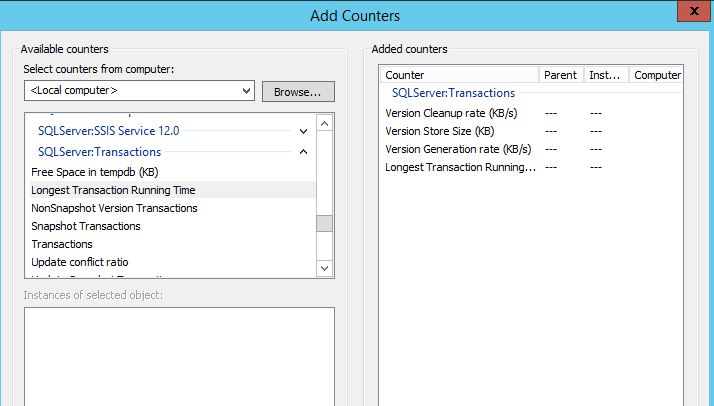 The Longest Transaction Running time counter was showing the value ~ 637803. This meant there was an old transaction that was still using the version store. The Version Store Size (KB) was showing ~850 GB and was still growing bigger. The version Generation rate (KB/s) was at 500 KB/s which was an acceptable range. The Version Cleanup rate (KB/s) was zero which indicated there was no cleanup happening on version store.

I then tried mapping the time of the oldest transaction that was using version store using the below query:

I then mapped the above time with last_batch in master.sys.sysprocesses table.

It is good to monitor tempdb growth on AlwaysON secondary server because alwaysOn uses tempdb to store row versions and temporary readonly statistics that are created by optimizer on readonly databases.

This was one of the interesting issues I faced in the recent past and wanted to share the same with you. Hope my article is helpful.

Enabling TDE on Databases in an AlwaysOn Scenario

Enabling Transparent Data Encryption on Databases in Always On Scenario

The first test of AlwaysOn in SQL Server 2012 is successful, but after testing to swing back again to your primary replica, you find out that automatic failover works only the first time. How come? Carla Abanes explains.