This is the seventh article in a series that examines the output of the Brent Ozar Unlimited sp_Blitz™ script run against the SQLServerCentral database servers. This article looks for future scans.

Brent Ozar Unlimited has released a fantastic script for examining the configuration, health, and performance of your SQL Server instances. This script is known as sp_Blitz™ and is currently at v22. You can download it and it builds a stored procedure that you can run on any of your instances.

We used this script to perform a quick audit of our database server instances in December of 2012 and learned a few things. This series of articles examines the results and mitigation strategies we've taken. The other articles are:

This article looks forward at how we will use sp_Blitz in the future.

We monitor and watch our SQL Server instances with SQL Monitor. That makes sense as it's the product we make as well as Red Gate Software (owners of SQLServerCentral). As we've mentioned above, you can go to monitor.red-gate.com and see a demo version of the software, but with real data. We replicate this data to a second instance where we show it on the web.

How does sp_Blitz™fit in here? We've actually integrated the script into SQL Monitor as a custom metric. You can see the configuration below: 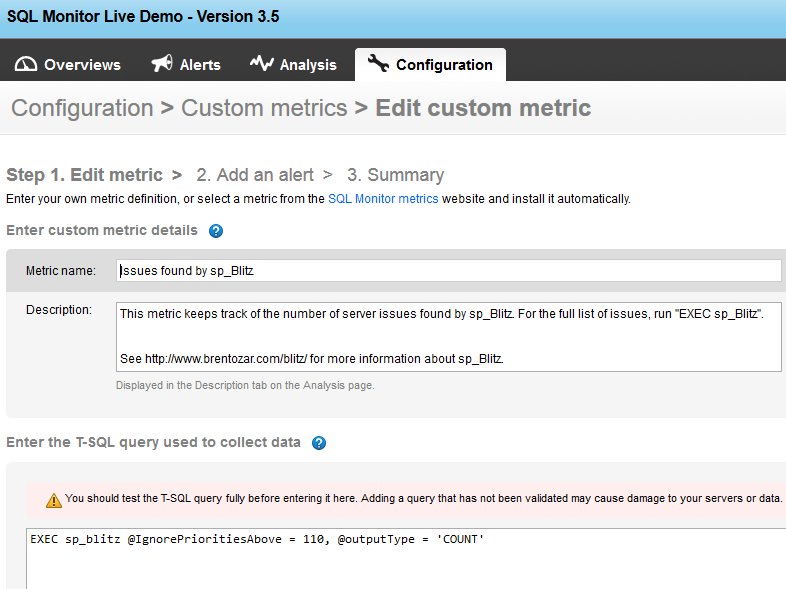 We've loaded the script onto the instances and then we call it on a regular basis. We've used the parameter This results in a

As you can see from the graph below, there's a steady level of issues, though a few drops at times. Those are likely items that were transient in the system (like backups or latencies), but have re-occurred. Overall, these seems consistent with the original analysis that we performed. 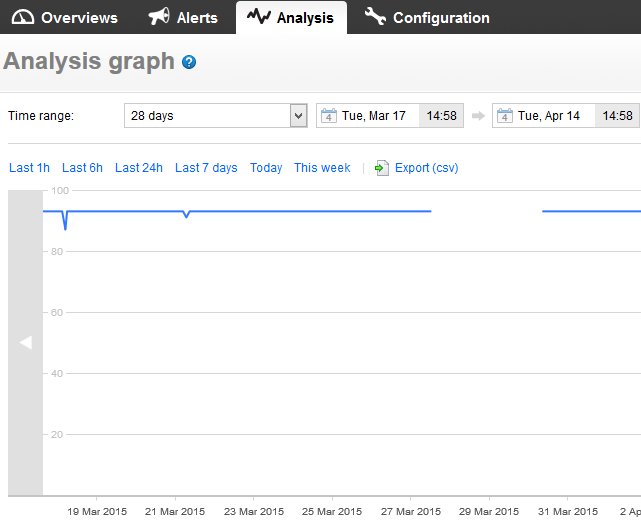 The various issues we resolved with sp_Blitz reduced the numbers of alerts, but there are some items which are unlikely to change without substantial alterations to the application and database instances. Like many businesses, the site works well, so not necessarily worth much time to resolve all the issues that we've noted from the script.

However, when we have issues, we can quickly check this metric and determine if anything fundamental has changed. If it has, we can manually run the script to examine the results and dig in deeper to determine the problem.

The sp_Blitz™ script doesn't solve our problems, but it does give us a way to perform additional monitoring on the SQLServerCentral database servers and this is another data point that we can use to watch the health of our database servers. This script integrates easily into SQL Monitor, which lets our IT staff get alerted if issues arise.

Part 3 of the analysis of the SQLServerCentral database cluster by MVP Brad McGehee. Follow along as he talks about some SQL Server settings and gives reasons why they should or should not be changed.

A look at what's happening with the SQLServerCentral servers based on the public information exposed by SQL Monitor.

The second article that examines the output of the sp_Blitz script&trade; run against SQLServerCentral's database servers.

A series that looks at the SQLServerCentral database servers using the Brent Ozar Unlimited sp_blitz script. Read about what we learned.

In this next installment looking at implementing best practices here at SQLServerCentral, Brad McGehee looks at a few performance counters and what they tell us about the performance of our database server.