Database clones are writeable copies of the source database built with Windows Virtual Hard Drives (VHDs) or enterprise storage arrays that deliver databases in seconds with minimal storage consumption. Windows VHDs support practical delivery of environments up to 3 TB, and storage arrays support environments up to 30 TB or more. Conventional CI pipelines build a new image following each source repo update. The “build for each change” isn’t needed or practical with databases as changes to the repo are usually limited to upgrade and rollback scripts. 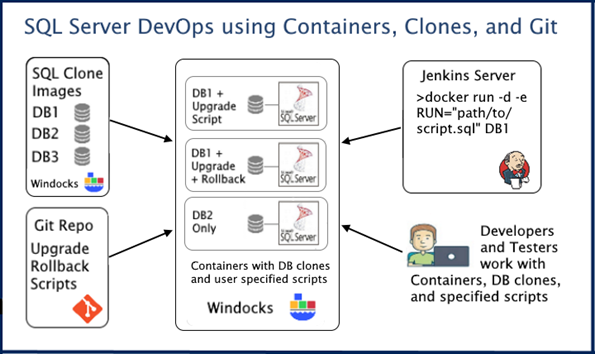 Images are associated with projects, and user-defined stages (Dev, Test, UAT, etc.). A DBA (or image administrator) creates a database image and tags the image to identify the database(s) (e.g. Databases: Microservice A). The image is based on a dockerfile (below), that uses a backup, and pulls scripts from the Git repo into each container at run time. The image is built with a standard Docker client or web UI, using

The contents of the dockerfile would be something like:

This creates an image for delivery of a writable cloned database and identifies the source repo that will be “pulled” for each container as it is created. The image stage is automatically set to "Database Ready”. If upgrade scripts are needed for the CI pipeline, the script developer sets the stage to “Development”. The developer develops and commits scripts to the Git repo, and creates new containers following each commit. Containers are created with a Docker command that specifies the scripts to be applied to the database.

A tester can now create three containers, one with just the production database clone, one with the upgrade script, and a third with the upgrade and rollback script applied. Each container is assigned either Pass or Fail after testing, and work continues until all containers Pass, and the image is set to “Stage: Database and Scripts Ready”.

The CI pipeline orchestrator (Jenkins, Azure DevOps, etc) can now create database environments with upgrade and/or rollback scripts applied during pipeline builds. Once a release is completed and the upgrade/rollback scripts are applied to the production database, the image can be marked as inactive.

Secure use of containers and production data

Continuous Integration with production databases must include built-in security. In addition to secure Windows based deployments Windocks is also used to bring SQL Server to Linux platforms such as OpenShift and Pivotal PKS.

Windocks SQL Server containers are delivered by cloning a locally installed SQL Server instance, and are delivered as conventional SQL Server named instances. This approach ensures compatibility with Windows Authentication and Active Directory, and supports the proven security of SQL Server namespace instances. As a result, Windocks containers do not face the security concerns of Docker containers that rely on public image repos, which can be a source of security vulnerabilities. User/group role based access controls ensure only authorized users’ access images and containers. Windocks also includes encrypted secrets to protect sensitive credentials.

The National Institute of Standards and Technology (NIST) has published a guide to Container Security (NIST SP 800-190), and a complete review of Windocks security provisions is available at: https://windocks.com/files/SQL-Server-Container-Security-NIST-SP-800-190.pdf

This new approach makes it practical to “develop on production,” with an approach that can be implemented on a single server, with data security built-in from end to end. This approach also holds appeal as it enables existing SQL Server based projects to modernize, as Microsoft continues to emphasis use of SQL Server Linux containers for SQL Server 2017 and 2019.

Get started today by downloading the Windocks Community Edition, available at https://windocks.com/community-docker-windows

Data governance must be included in DevOps practices. William Brewer explains how to define business policies and standards to ensure compliance with privacy regulations and bring data governance to...

In this article, Grant Fritchey looks at the need to ‘shift left’ the database and associated database testing, while keeping sensitive data secure when it is outside the production...

One of the key tenets in DevOps is to involve the Operations team in the full software development lifecycle and, in particular, to ensure that operational requirements are incorporated...

Where's the Ops in DevOps? Part 1

In the first of a three-part series, guest bloggers from DevOpsGuys look at the real role of Ops in DevOps. Where it changes, how it changes, and why Ops...

The language of DevOps ROI

How do you quantify the value of DevOps? The answer might depend on what value actually means for your organization, which stakeholder you’re talking to, and what type of...