One of the coolest new features of SQL Server 2005 is its native XQuery support. The

new XML data type we discussed in the last article, with its

This article demonstrates XQuery in SQL Server 2005. We'll begin with a definition of

you XML1, XSL2, and dozens of other related specifications: the

XQuery 1.0 as an extension to XPath 2.0, borrowing heavily from several other query

XQuery is a declarative, functional query language that operates on instances of the

type system, allowing XQuery to operate on "the abstract, logical structure of an XML

document, rather than its surface syntax" (W3C XQuery 1.0 standard). What this means

representation of your XML. The "XML as a tree" concept should be familiar to Web

[although the similarities between DOM and XDM for the most part end there]. Each branch (or

"node") of the XDM tree maintains a set of attributes describing the node. In the

typed representations), parent/child information, and possibly some other information

specific to the node type.

Consider Listing 1 below which defines an XML Schema collection,

creates a typed XML variable associated with the XML Schema

collection, and then populates the XML variable with a valid

XQuery can query the typed XML document via a tree structure generated by the XDM.

the sample XML document (click the image for a large version in its own pop-up window).

The XDM can also generate trees for untyped XML, in which case it assigns types of

to attributes, meaning they are not validated against an XML Schema. 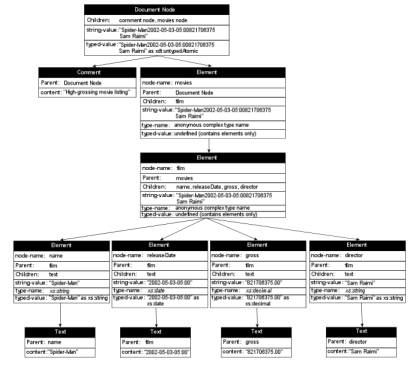 The SQL Server 2005 XQuery implementation is a subset of the W3C XQuery 1.0 standard,

SQL Server XQuery support. This is important to know if you are trying to convert existing

XQuery scripts from other sources, such as existing applications, books on XQuery, or even

Expressions are the building block of XQuery queries. Expressions come in many flavors

including literals, variable references, function calls, and others. Examples of

Sequences are ordered collections of items. An example of a sequence might include:

A sequence can contain duplicate values and the order of the sequence is maintained.

Note that the items in the example sequence are not sorted numerically or alphabetically,

but are stored in the order they are added to the sequence. When a sequence is the result

of an XQuery expression, the items are normally added to the sequence in "document

allows you to query XML data using XQuery. A simple XQuery query consists of a path

expression. Path expressions determine which nodes should be returned by an XQuery. The

location path is read from left to right, corresponding to moving down and to the right in

the XML node tree. A path expression that begins with a single forward slash

("/") starts at the root of the XML input. A path expression beginning with a

Borrowing from our sample XML in the previous article, we'll create a sample XML

document we can use the xml data type's query() on. I'll

assume you're a Family Guy fan like me (Giggity-Giggity!) for this example. The

sample XML document, and its schema collection, looks like this:

the episode titles from the XML document in Listing 2:

/* Retrieve all quote nodes anywhere in the XML */
SELECT @doc.query('//quote');

the path. For instance the sample query below retrieves all nodes beneath the

/show/episode nodes, no matter what their names:

/* Retrieve all nodes beneath the /show/episode nodes */
SELECT @doc.query('/show/episode/*');

Because of its heritage, XQuery can dynamically build XML output from XML input. We can

use the sample that retrieves show titles to dynamically build a well-formed XML document:

Simple path expressions like the above are fine for solving simple problems, but

FLWOR expressions are named for the keywords they are made of: for,

let, where, order by, and

return. SQL Server's XQuery supports all but the let

clause. A FLWOR expression is a powerful construct that iterates your XML nodes with the

for clause, limits the results using the where clause,

sorts the results using the order by clause, and returns the

results via the return clause. Consider the following sample

This sample begins with a for clause, which iterates the

/show/episode nodes, assigning each matching node to the

The where clause limits the results to episode nodes

containing a number node with a value less than or equal to 3, discarding nodes that don't

The order by clause is an optional clause that determines

the sort order of the results. In this example the results will be ordered by title.

Finally each matching episode's title, number, and synopsis are returned by the

In the sample FLWOR expression above, I used the le

comparison operator in the where clause to narrow result

set to those nodes with a number node value "less than or equal to" 3. XQuery

Figure 2 below is a summary of the comparison operators available 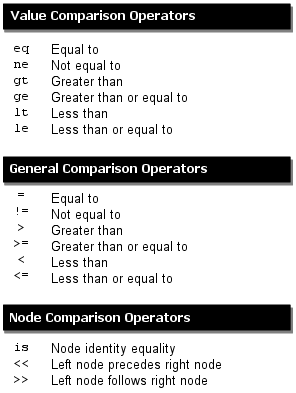 The value comparison operators compare one singleton atomic value to another, as in the

The general comparison operators are "existential" operators that can be used

to compare sequences of items. Existential simply means the operator returns true if any

with any of the singleton atomic values from the right-hand sequence. As an example, the

But this expression returns false:

the node on the right-hand side. Note that this doesn't mean it will return true if the

two nodes have the same name, value, and contents: the is

operator returns true only if the two nodes are actually the exact same node.

node, in document order. The >> operator returns true if the right-hand node appears

after the left-hand node, in document order.

expression plugged in), you will get immediate feedback from SQL Server: either true,

false, or an empty sequence.

Functions and Operators (F&O) specifications, most of the XQuery-specified math

Use XQuery scripting language to retrieve specific XML data type values in SQL Server. Learn to script and use Value() and Query() to retrieve single and multiple XML values.

The eleventh installment of the XML Workshop continues looking at namespaces. This time Jacob Sebastian examines default namespaces and how they impact your XML processing.

With the tenth installment of his series on XML, Jacob Sebastian turns his attention to the art of namespaces and how you can avoid ambiguity in interpreting various elements.

Continuing on with his series and quest to educate us DBAs on the capabilities of SQL Server 2005 with regards to XML, Jacob Sebastian looks at the FOR XML EXPLICIT clause.