The Guardian published a story (http://gu.com/p/494q6/stw) with a math problem, supposedly for Vietnamese eight-year-olds, where the solution required filling in a digit from 1-9 in each of 9 boxes (using each numeral only once), where the resulting total from the operations as specified by the other boxes equaled the specified value. (The : indicates a division operation. Standard order of operations must be followed.) 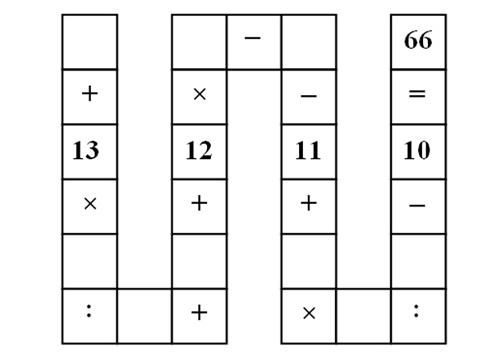 From article at theguardian.com

Then I created the SELECT query:

Essentially, we are joining to the numbers table 9 times, and using the ON criteria of the join to prevent numerals from being used more than once.

In the WHERE clause, we have simply stated the original problem, using  a.n, b.n and so forth to represent the empty boxes we are trying to fill.

....with 125 additional rows.  In other words, SQL says that there are 128 possible solutions to the problem.  (Note: this includes 16 rows that do total 66.00000000, but involve irrational numbers. Technically these are only "approximately" right. See below for an explanation.)

We could check this out by testing the values that were returned.  For the first row:

Note that the parenthesis are not needed: I include them here just to show where we substituted values that were returned in each row.

SQL is a pretty good way to solve problems like this that require a brute force, trial-and-error approach.

An associate of mine says that "Programming is an art form that fights back." I often find this to be true. This math problem is one example of that.

Originally, when I created my numbers table I used a data type of int. This makes sense, because in this problem we are only allowed to use integers.

But when I ran the query, I was surprised to see erroneous results. The query returned 2672 rows, the first one of which was:

When we test this, this is what we see:

SQL does say the answer to this is 66. But if we use a calculator, we get a result of 67.5417! Yikes! If we had printed out our results and turned it in to the teacher we would have failed the assignment. What is going on?

This returns the result of 3. Notice that @x is really a character string...and you can't really perform an arithmetic operation on a character string. SQL was kind enough to automatically (implicitly) convert the string to a number for us before performing the calculation. Very convenient and intuitive, right?

Well, not always. Watch what happens if we make a small change to the query:

This returns an error!

Well, actually, we have indicated that SQL ought to be working with integers. SQL sees the "+ 2", and says "Hmm. 2 is an integer. Therefore the caller wants the operation to be performed on integers. Therefore I must cast the string '1.1' to an integer...but that results in an error". The type of integer is implied (hence the phrase "implicit type conversion").

If we change the query slightly one more time, we can make it work more like we expected:

This returns the result of 3.1. The only thing we did different here was to use 2.0 instead of 2. But this was enough to imply to SQL that we wanted to work with floating point values instead of integer, so then SQL's implicit type conversion converted our string '1.1' to the floating point value 1.1 as we desired.

What is more, when SQL performs an operation on two integers, if the result contains a fraction, the fractional portion is discarded. The result is NOT rounded. For example:

This returns a 0. We know that 2/3 really equals .666667, and we know that if we were to round to the nearest integer the result of 2/3 would be 1. But for integer-based calculations SQL simply discards the fractional portion, so 0.666667 gets truncated to simply 0.

If we change the query slightly, SQL will return a floating point result:

This returns 0.666666 But wait! Shouldn't this be rounded to 0.666667? Well, even when working with floating point values SQL will not round unless we explicitly tell it to.

Result: 0.7 This is time SQL omitted the trailing zeros, because we explicitly casted the result to decimal(10,1)

How about if we try to tell SQL what we want the data type of the result to be, such as:

Nope. This returns 0. Why? Because implicit type conversion indicates that the arithmetic operation is to be performed on integers (resulting in 0), and we then cast 0 to a floating point value.

From these tests, we can identify the following rules to follow when performing math calculations:

In our math problem, if we use a data type of int, SQL performs each operation as an integer operation. Effectively this means that each operation that would result in a decimal value has the fractional portion of the number discarded (not even rounded)...which results in the unexpected results our query returned.  It makes sense that using an integer type would produce incorrect results.

It also makes sense that mixing data types within the calculation could produce unexpected results due to implicit type conversion.  But here we are carefully using consistent, explicit data types and still seeing strange results.

It would seem that a float data type, as well as all flavors of decimal data types should yield the correct results...but this is not the case.

The problem is not as simple as just rounding.  The data type used makes a big difference. as we will see below.

I wrote a dynamic SQL query to do that for many numeric data types.  (See attached file for the actual query.)  Note that I am using MSSQL 2008R2.  This is what I found:

Regarding the float type, the 16 additional rows that are returned when we use the float data type all involve infinite repeating decimals (known as irrational numbers).  This is why these rows do not "exactly" match our requirements, though they do "approximately" match (i.e. they do total 66.0000000).

The really strange results involve the so-called "exact" decimal data type, but seem to return "approximate" matches. Some flavors of this type, for example decimal(16,0). result in more rows than we expect.

When we look at the specific numbers returned for one of these types such as decimal(16,0), we see that they are sort of like float, in that they return numbers that do total out to 66.00000000, but they do involve some irrational numbers.

For example, one such row is: 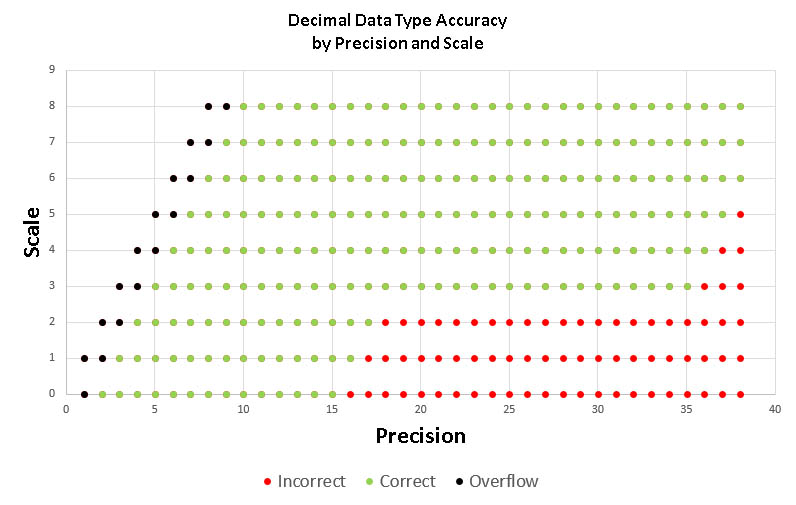 I set out to write a simple article about using SQL to solve a grade school math problem, and then I found myself deep into implicit data type conversion issues.  Worse, I ended up getting stuck trying to figure out why 72 flavors of the decimal data type result in the incorrect results while 225 flavors work fine.

Microsoft says:  "The decimal data type stores an exact representation of the number; there is no approximation of the stored value."  This page also clarifies the distinction between exact and approximate data types.  Yet in my testing it seems that some decimal types yield "approximate" results, and some yield inaccurate results.

So I am stumped.  I'm sure you readers will have some good insight as to what is going on here.

SQL can be a good way to solve trial-and-error kinds of problems. But, be careful: SQL's implicit type conversion can result in confusing or erroneous answers. Getting in the habit of explicitly indicating the desired data type of each value involved in an arithmetic calculation will help avoid errors.  Even so, sometimes mysteries arise.

I saw your recent tip on Calculating Mathematical Values in SQL Server and have some related issues as I try to round values in my application. My users and me have a difference of opinion on some of the calculations in our reporting applications. All of the code is in T-SQL, but I think the reporting issues are related to data types and rounding down or rounding up rules. Do you have any insight into these issues? I would like to see some examples with a variety of coding options.

Stairway to T-SQL DML Level 4: The Mathematics of SQL: Part 1

A relational database contains tables that relate to each other by key values. When querying data from these related tables you may choose to select data from a single table or many tables. If you select data from many tables, you normally join those tables together using specified join criteria. The concepts of selecting data from tables and joining tables together is all about managing and manipulating sets of data. In Level 4 of this Stairway we will explore the concepts of set theory and mathematical operators to join, merge, and return data from multiple SQL Server tables.

Are all rounds created equal

Predict output for ROUND function