This is part 1 of an 8 part series of articles about speeding up access to a SQL Server database. This series is based on chapter 8 "Speeding up Database Access" of my book ASP.NET Site Performance Secrets, available at amazon.com and other book sites.

In parts 1 and 2 we'll see how to pinpoint any bottlenecks, such as missing indexes, expensive queries, locking issues, etc. This allows you to prioritize the biggest bottlenecks. Parts 3 through 8 than show how to fix those bottlenecks:

You can greatly improve the performance of your queries by reducing the number of reads executed by those queries. The more reads you execute, the more you potentially stress the disk, CPU and memory. Secondly, a query reading a resource normally blocks another query from updating that resource. If the updating query has to wait while holding locks itself, it may then delay a chain of other queries. Finally, unless the entire database fits in memory, each time data is read from disk, other data is evicted from memory. If that data is needed later, it then needs to be read back from the disk. again

The most effective way to reduce the number of reads is to create enough indexes on your tables. Just as an index in a book, a SQL Server index allows a query to go straight to the table row(s) it needs, rather than having to scan the entire table. Indexes are not a cure all though - they do incur overhead and slow down updates - so they need to be used wisely.

In this part, you'll see:

SQL Server allows you to put indexes on table columns, to speed up WHERE and JOIN statements on those columns. When the query optimizer optimizes a query, it stores information about those indexes it would have liked to have used, but weren't available. You can access this information with the dynamic management view (DMV) dm_db_missing_index_details:

The most important columns returned by this query are:

This information is not persistent - you will lose it after a server restart.

Don't take the results of dm_db_missing_index_details as gospel. Not all indexes that it suggests would actually be useful, some are duplicates, etc.

An alternative is to use Database Engine Tuning Advisor, which comes with SQL Server 2008 (except for the Express version). This tool analyzes a trace of database operations and attempts to identify an optimal set of indexes that takes the requirements of all queries into account. It even gives you the SQL statements needed to create the missing indexes it identified.

This all sounds great, but keep in mind that Database Engine Tuning Advisor will sometimes come up with the wrong indexes and miss good indexes. Before you make any changes, read part 3 "Fixing missing indexes" first.

The first step is to get a trace of database operations during a representative period. If your database is busiest during business hours, that is probably when you want to run the trace:

4. You want to minimize the number of events captured, to reduce the load on the server. Deselect every event, except SQL:BatchCompleted and RPC:Completed. It is those events that contain resource information for each batch, and so are used by Database Engine Tuning Advisor to analyze the workload. Make sure that the TextData column is selected for both events. 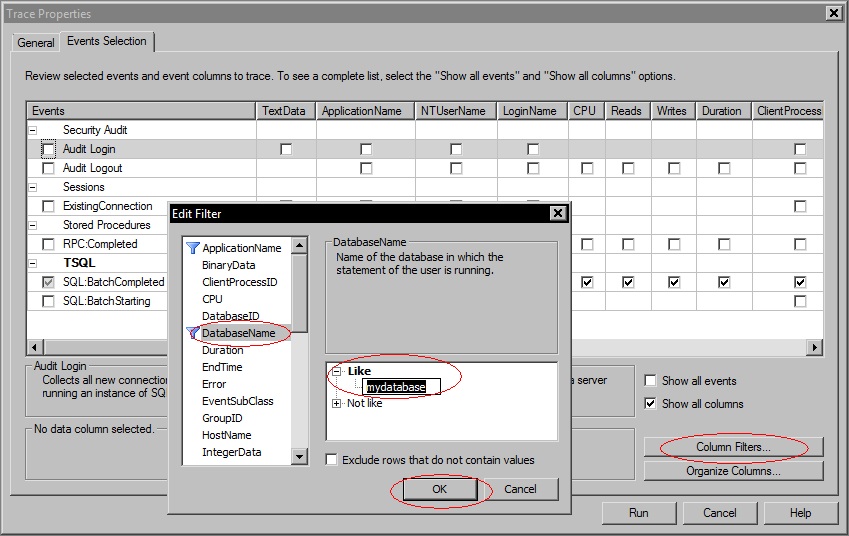 7. Click the Run button to start the trace. You will see batch completions scrolling through the window. At any stage, you can click File | Save or press ctrl-S to save the trace to a file.

8. Save the template, so you don't have to recreate it next time. Click File | Save As | Trace Template. Fill in a descriptive name and click OK. Next time you create a new trace by clicking File | New Trace, you can retrieve the template from the Use the template dropdown.

Sending all these events to your screen takes a lot of server resources. You probably won't be looking at it all day anyway. The solution is to save your trace as a script and then use that to run a background trace. You'll also be able to reuse the script later on.

9. Click File | Export | Script Trace Definition | For SQL Server 2005 - 2008. Save the file with a .sql extension. You can now close SQL Server Profiler, which will also stop the trace.

10. In SQL Server Management Studio, open the .sql file you just created. Find the string InsertFileNameHere and replace it with the full path of the file where you want the log stored. Leave off the extension, the script will set it to .trc. Press ctrl-S to save the .sql file.

11. To start the trace, press F5 to run the .sql file. It will tell you the traceid of this trace.

12. To see the status of this trace and any other traces in the system, in a query window execute the command:

Find the row with property 5 for your traceid. If the value column in that row is 1, your trace is running. The trace with traceid 1 is a system trace.

13. To stop the trace after it has captured a representative period, assuming your traceid is 2, run the command:

To restart it, run:

14. To stop and close it, so you can access the trace file, run:

2. In the Workload area, select your trace file. In the Database for workload analysis dropdown, select the first database you want analyzed.

3. Under Select databases and tables to tune, select the databases for which you want index recommendations.

4. Especially with a big trace, Database Engine Tuning Advisor may take a long time to do its analysis. On the Tuning Options tab, you can tell it when to stop analyzing. This is just a limit, if it is done sooner, it will produce results as soon as it is done.

5. To start the analysis, click the Start Analysis button in the toolbar.

Keep in mind that Database Engine Tuning Advisor is just a computer program. Consider its recommendations, but make up your own mind. Be sure to give it a trace with a representative workload, otherwise its recommendations may make things worse rather than better. For example, if you provide a trace that was captured at night when you process few transactions but execute lots of reporting jobs, its advice is going to be skewed towards optimizing reporting, not transactions.

If you use SQL Server 2008 or higher, you can use the activity monitor to find recently executed expensive queries. In SSMS, right click your database server (normally in the top left corner of the window) and choose Activity Monitor.

A limitation of this DMV is that when you run it, not all queries that have run since the last server restart will have a plan in cache. Some plans may have expired due to disuse. Plans that were very cheap to produce, but not necessarily cheap to run, may not have been stored at all.

Another limitation is that as it stands, this query is only suitable for stored procedures. If you use ad hoc queries, the parameters are embedded in the query, so the query optimizer produces a plan for each set of parameters, unless the query has been parameterized. This is further discussed in part 6 "Fixing execution plan reuse".

To get around this, dm_exec_query_stats returns a column query_plan_hash which is the same for each query that has the same execution plan. By aggregating on this column using GROUP BY, you can get aggregate performance data for queries that share the same logic.

The query returns this information:

An alternative to using dm_exec_query_stats is to analyze the trace you made with SQL Server Profiler. After all, this contains performance data for every completed batch. A batch corresponds to a stored procedure, or a query if you use ad hoc queries.

To investigate this a bit further, load the trace file into a table. You can use Profiler to do this:

2. To open the trace file, click File | Open | Trace File, or press ctrl-O. If you want, you can now analyze the trace in Profiler.

3. To save the trace to a table, click File | Save As | Trace Table. If the table you specify does not yet exist, Profiler will create it.

If you send stored procedure calls to the database, good on you. In that case, it isn't too hard to remove the parameters, because they always come after the stored procedure name. Here is a sql script that does exactly that and then aggregates the performance data per stored procedure (stored procedures are discussed further in part 6, which is about execution plan reuse):

If you send ad hoc queries, removing the variable bits of the queries will be a lot harder, because their locations are different for each query. The following resources may make your job a bit easier:

Once you've identified the most expensive queries, you can find out whether adding indexes would speed up their execution.

1. Open a query window in SSMS.

2. From the Query menu, choose Include Actual Execution Plan. Or press ctrl+M.

3. Copy an expensive query in the query window and execute it. Above the results pane, you will see a tab Execution plan. Click that tab.

4. If the query optimizer found that an index was missing, you will see a message in green.

5. For more information, right click in the lower pane and choose Show Execution Plan XML. In the XML, look for the MissingIndexes element.

If you identified missing indexes, in part 3 you'll see how indexes work and how to create them. If you found any particularly expensive queries, in part 4 you'll find how to fix those.

Indexes not only speed up reads, they also slow down updates and take storage space. If an index slows down updates but is little or not used for reading, you're better off dropping it.

Use the DMV dm_db_index_usage_stats to get usage information on each index:

In this part, we saw how to pinpoint missing indexes and expensive queries through a number of DMVs and SQL Server Profiler. In part 2, we'll see how to pinpoint additional bottlenecks, such as locking and fragmentation issues.

This article is taken from Chapter 8 of ASP.NET Site Performance Secrets. Click the image or link to get your copy at Amazon.

In earlier installments of this series we looked at T-SQL Performance optimizations along with different T-SQL practices, we can now turn our attention to the second part of this series which is index Tuning

Top 10 steps to optimize data access in SQL Server. Part I (Use Indexing)

’ll focus on the issues that you need to follow to make sure that you have done everything that you could do to optimize the data access codes you have written or you are going to write in future. The Database Administrators (DBA) also has great roles to play in optimizing and tuning the database performance. But, optimization scopes that fall into a DBA’s area are out of scope for these articles.

When created and maintained correctly, indexes help SQL Server retrieve data quickly. See how to ensure your SQL Server environment is running up to speed.

Are Your Indexes Being Used Effectively?

Indexing a SQL Server database in some respects is considered both an art and a science. Since this is the case, what are some considerations when designing indexes for a new database or an existing one in production? Are these the same types of steps or not? Do any best practices really exist when it comes to indexing? Where does indexing fall in the priority list from an application or production support perspective?