SQL Server 2008 has a new feature called "Slipstreaming", this basically enables you to integrate the Service Pack and Cumulative Update installation during the RTM SQL Server setup process. There are various prerequisites depending upon the Operating System in use, they are covered further on in this article.

So, how do we slipstream the Service Pack and the Cumulative Update?

The first operation is to obtain the relevant SP and if required the relevant CU. At the time of writing SP1 and SP2 are available for SQL Server 2008 (this does not apply to SQL Server 2008 R2). I prefer to copy my update executable(s) onto the server and then extract locally onto a folder on the C drive.

Note: Extracting and then launching the SP from the C drive forces the SP to use a temporary folder on that drive, this can be very useful in clustered environments as clustered drives may offline and online during installation (an issue many have encountered).

For this article I am going to slipstream my SQL Server 2008 installation with SP1 and CU7 for SP1. I have the following executables which i have copied to the server

To extract the updates, use the following syntax noting my chosen paths

Two folders will be created on the C drive containing the update files. If you are using Windows 2003 server you must first install the following prerequisites. If the SQL Server 2008 DVD autoruns, cancel this and proceed manually.

For a Windows 2008 server simply go into server features and enable the .NET 3.51 feature

Once the prerequisites are installed you need to launch the SQLSupport.msi inside the C:\CU7\x64\setup\1033 folder. With the support files installed, launch the SQL Server setup process using the following from a command prompt. 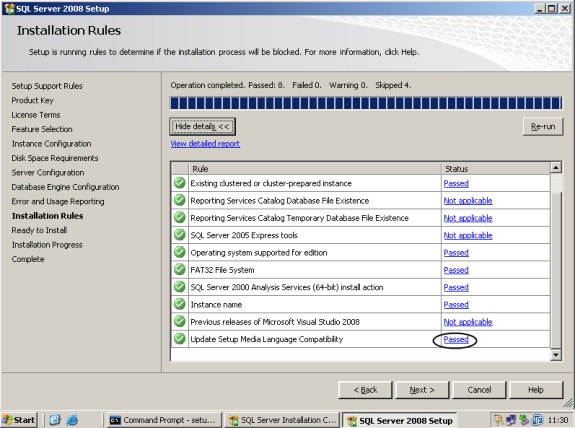 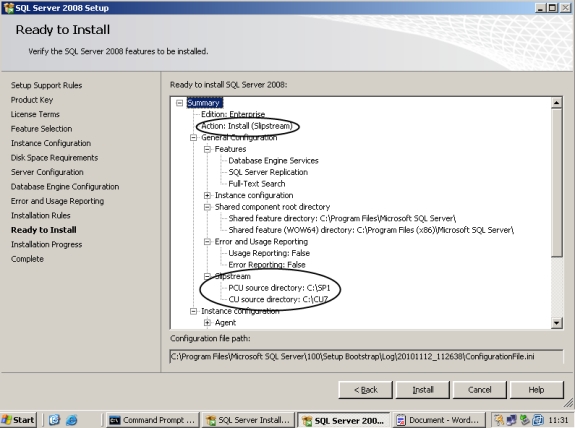 Login to the new SQL Server instance and a quick version check reveals 10.0.2766, SQL Server 2008 SP1 CU7! You may also create a "Merged Drop" media, this comprises of the original RTM media with the update files overlaid creating an updated install media. More on this can be found at the following Microsoft link: http://support.microsoft.com/kb/955392

Service Pack 3 for SQL Server 2000 is huge. There are significant changes in it and they apply to all three products: the core SQL Server, MSDE, and Analysis Services. Because there are so many changes, this first article in the series will only focus on the security changes.

Ways to Determine the Version and SP of SQL Server

There may be more ways than you realize to determine the version and service pack of SQL Server. This quick article by Dinesh Priyankara will show you 3 of those methods.