Like most DBAs, I have a lot of predictable maintenance tasks that I’m required to monitor. For example, there are changes, specifically data loads, which happen on a 'quarterly' basis, as defined by the institution where I am employed.    In this article I will describe an SSIS Package, that I have created, that once created into a job and run the first time, will schedule its next run before it completes.

The red boxes with numbers correspond to the described Package Steps below. 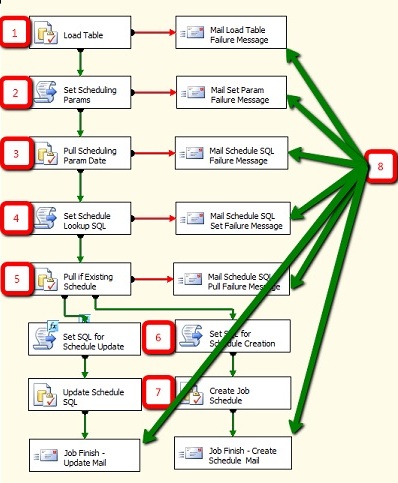 This section describes the above image of an SSIS package and the details that are necessary to understand what is happening in each step.

*Note that good practice calls for a naming standard to name variables; for example the variables should have str before the strings, and int before the integer variable.

I won’t be going into the details of this load, other than a general description, because the details are specific for each data load.

In this case, the SQL statement calls a stored procedure that runs against a set of tables to generate the list of classes that were offered at the college over the last 2 years, as well as a few other details that will allow students to make an informed choice about when the classes they want to take are likely to be available. 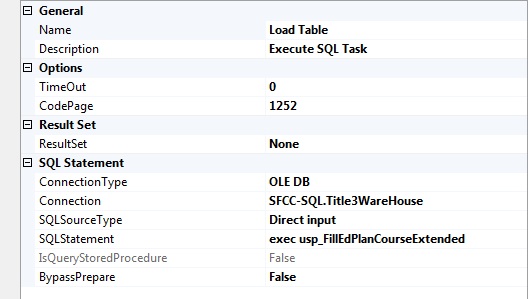 Setting up of next run variables (Step 2)

In this case, the next run date can be easily generated by looking at “Quarter” table, and determining when the next quarter’s ‘run’ should happen. For example, SQL Server generating next quarter’s run date out of the quarter table.

As I am only showing a part of a single quarter’s information as an example,  assume past and future quarter information exists. The T-SQL code grabs the next line’s qtrStartDate, that exist in the table following the current quarter per the qtrCurrentQtr column.

All that is needed is a valid ‘future’ date SQL statement that returns  the next date you want to run the job.  For example, this SQL could easily be replaced with SQL that gives you the next Sunday date so that it handles weekly loads.

This step sets the package variables.  This is where you’ll make your changes to fit your job name and schedule name.  Also the date generating SQL (strSQL) will need to be modified to fit your needs.  The key variable details are strSQL, JobName, and ScheduleName.

Execution of variable SQL to get next run date (Step 3)

This step takes the strSQL variable created in Step 2,  executes it against the database, and returns the value to the user variable ScheduleDate. 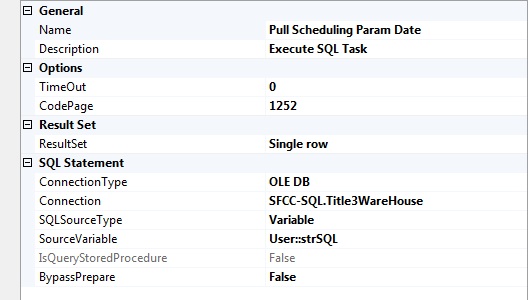 To determine if there is an existing schedule for this job, this step sets a variable with the proper SQL statement based on variables set in Step 2, to be executed against the database.  This section does not need to be modified.

This Section takes the strSQL variable and executes it against the database and returns the value to the user variable ScheduleDate. 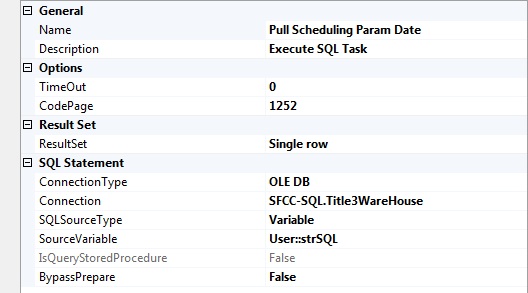 There exists a current schedule by this name in the database. 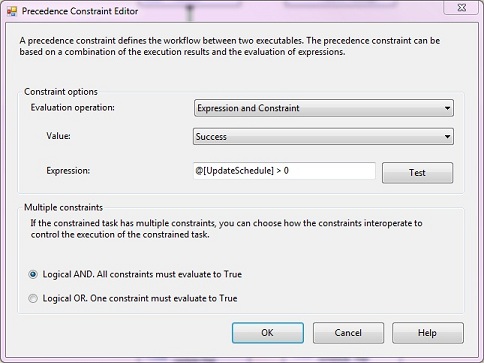 Schedule Does Not Exist

No schedule was found with this name in the database. 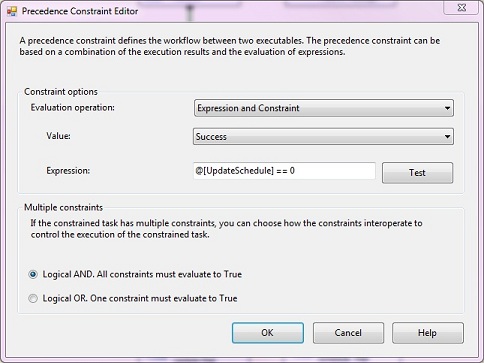 Set of SQL to Create or Update Schedule (Step 6)

The basic SQL for this came from Microsoft. http://msdn.microsoft.com/en-us/library/ms187354(v=SQL.100).aspx; I modified it to suit my specific purposes.  This step does not need to be modified.

The basic SQL for this came from Microsoft http://msdn.microsoft.com/en-us/library/ms366342(v=sql.100).aspx; I modified it to suit my specific purposes.  This step does not need to be modified.

This step executes hte SQL generated in the previous step against the database. 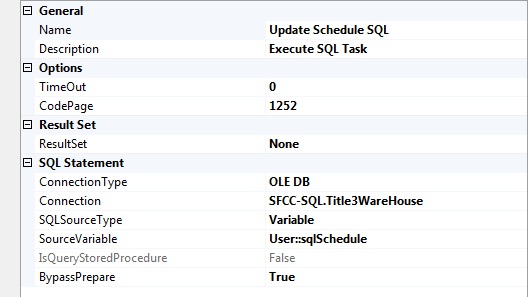 This is really the same step as the update; both use the same variable but it is repeated here for clarity, to match the package image. 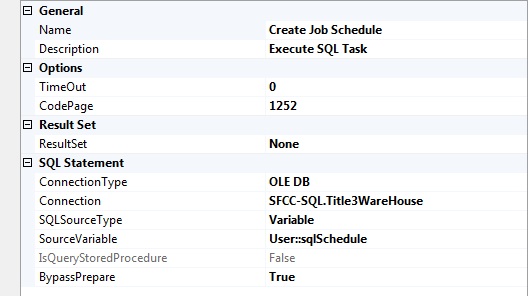 Each mail message has slightly different verbiage, which tells me where the failure happened, or which branch the success took.

This is the end of the package details.

To make all of this functional, you will need to deploy this script to your SQL server.  There are several ways to do this, which I won’t discuss here.  After the package is deployed to your server, create a job that references the package, and then run the job.  If the schedule is non-existent a job schedule will be created, or if it does exist it will be updated.

These are limitations of this process.

What has been shown is a methodology for jobs that can self-schedule, based on a calculable date, and in this case handles a periodic data load.  Once one understands the basic flow, it’s really a pretty simple idea as demonstrated by the following list:

So far, this methodology has worked well and hasn’t failed yet.  With the minor addition of mail messages to #7, I should always get a message telling me the results of the run.

So there you have it, a self-scheduling job that handles a data load.

This script will break job schedules down into a readable format (msdb.dbo.sysschedules)

Sometimes we have a T-SQL process that we need to run that takes some time to run or we want to run it during idle time on the server. We could create a SQL Agent job manually, but is there any simple way to create a scheduled job?

Red Gate is looking for a Business Intelligence Developer to work with our internal development team on creating business intelligence solutions. You'll be responsible for designing, building, and testing end-to-end BI solutions using the Microsoft BI stack, so we'll expect you to be passionate about understanding data and generating a universe of analytics for your customers – our Red Gaters.