I recently set up a new report in reporting services to monitor the companies SQL Servers, making life a bit simper and gain kudos with the management. The report lists disk space on all drives as well as the last time that the SQL Server instance was started. This uses a rather useful undocumented extended stored procedure that I discovered when searching for how to find the disk space available on a server, when you only have access to the server via ODBC or the client tools. This article discusses how to build my report.

Next add a new dataset connecting to the Shared Data Source, for ease name this dataset as the "servername", shown as "Houdini" in the image. Add the following script:

This is shown in the image below: 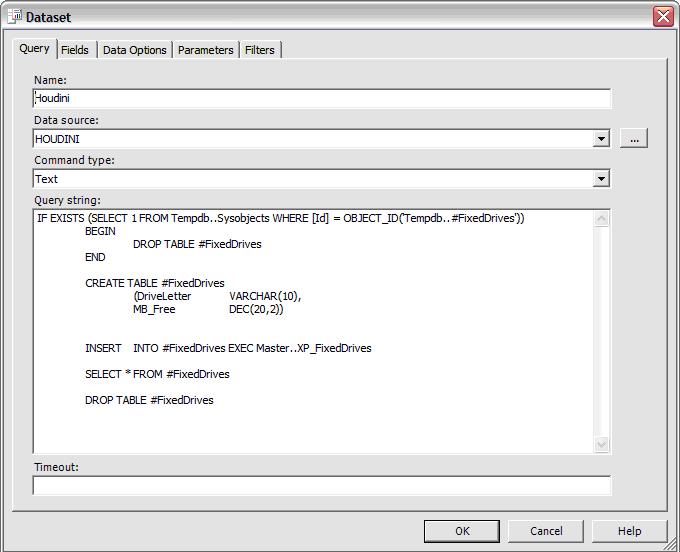 I then created another new dataset I named it the "servername"uptime (like "SQL01Uptime") connecting to the same Shared Data Source, but using the following script:

This finds when the Server was last started and the number of days it has been running.

In the layout window add a new table with the first dataset "servername" as your source. I created 2 new table headers making 3 in total, in the first header row I added the server name in the first column, in the second column I added the label Last Started and then dragged the Started field from my second datasource servernameuptime into the final column as =First(Fields!Started.Value, "ServerNameUptime").

This is to indicate when this server has just recently been rebooted as I really want to highlight that to the recipient of the report.

In the third header Row add the Headers Drive in the first column, and MB Free in the second. In the details drag the DriveLetter and MB_Free fields from the first dataset (named as the servername). The designer is shown in Figure 2. 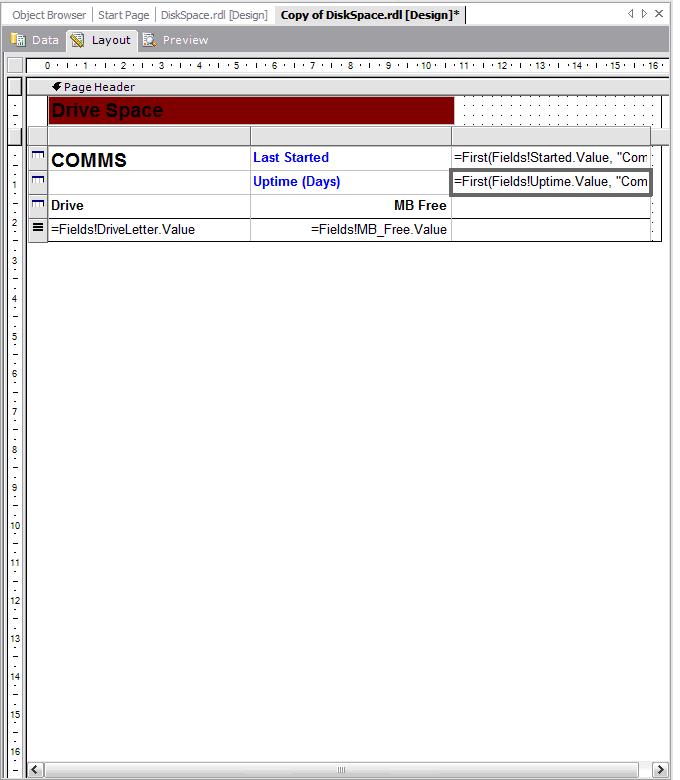 The following report is the result:

I added all my servers to this report and scheduled it to run at 8:00am every morning to go to the inbox of anyone who would need to know this information. If SQL Services have been restarted or the server rebooted overnight you would instantly have the Uptime highlighted in red and you could investigate why this had occurred. One thing you could also do is add a conditional expression to change the colour of the MB Free to red when it was less than a given amount as well, allowing you to determine if any server is running out of space.

Part III of the article series illustrates how to partition an existing table with data into four different file groups.

If you create functions or stored procedures from SQL Server 2005 Management Studio, you will notice that the new window is filled with a template. In general, you get a skeleton interspersed with markers. This article discusses how you can use templates.

Learn how to make life easier by dividing large tables and indexes into smaller parts.

So, you’ve just installed SQL Server 2005 but don’t know how to configure it. This video will instruct you how to use the SQL Server 2005 Surface Area Configuration tool to turn on SQL Server features like CLR integration and how to enable ports. Free registration required.