On Indexes and Views

Used properly, indexed views can be a magnificent way of improving performance and providing greater ease for both users and developers while still maintaining a fully normalized and constrained database. However, to fully realize the benefits of the indexed view, the execution plan must actually make use of it.

When a nonindexed view or a view whose index will not be used in the execution plan is referenced in a query, the optimizer considers the select statement the view represents the same way it would consider a subquery. In a way, this is very much like using the view as a macro. It saves the user or developer from having to type, or even be fully aware of, the exact contents of the view, but the optimizer looks at it as though the developer had typed it in.

When dealing with a view with an index that will be used, the optimizer can go to materialized data the view represents instead. In most cases, this is can be much more efficient than expanding the view, especially when the view includes multiple joins or complex where statements within it. So, while some exceptions do exist, it is generally desirable to ensure that the index is used.

To use an indexed view in all other editions, the NOEXPAND table hint must be used.

In short, indexed views in every version but Enterprise will only be used to their full potential if the developers and users carefully ensure that they appropriately use the NOEXPAND hint. Also, applying the NOEXPAND hint to a view which does not have an index will generate an error. It can be illuminative to see an example.

First, some test data is needed.:

Then, run the select statements and compare:

And here are the execution plans: 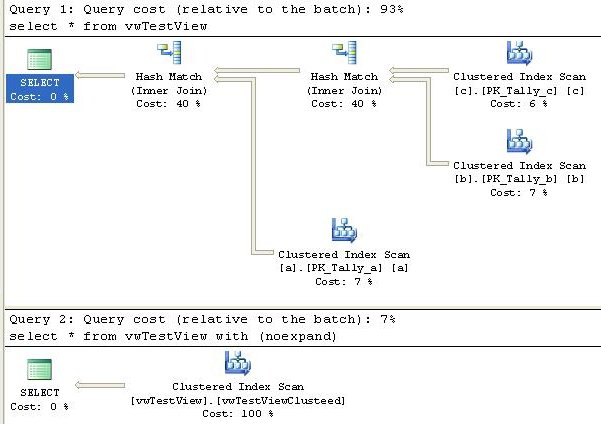 The second plan generated with the NOEXPAND query hint is vastly more efficient than the one without because of the way they are processed. This particular execution plan was generated by SQL Server 2005 Express, but the same results come from Standard Edition as well.

One way to simplify this for developers and users is to use another view to hide the query hint. For instance:

Then a query against this view will include the NOEXPAND against the other and generate an appropriate execution plan like:

One thing to note with embedding the NOEXPAND hint is that the query will return an error if NOEXPAND is specified and no indexes exist on the view. This should rarely be an issue, but it is worth noting. This is especially true since if a change is made to one of the base tables using SSMS Designer, the Designer will display a confirmation message that the table is referenced with Schemabinding but then readily destroy the index if the confirmation is given. This can lead to indexes being destroyed in development environments very easily.

As long as the optimizer knows to use them, indexed views can provide enormous performance benefits. In the more powerful Enterprise Edition, the optimizer will handle this and there is rarely a reason to explicitly force their use. In other versions, though, the optimized must be explicitly told if they are needed. But, like other query hints, this explicit instruction can be made just once in a view on the indexed view if that is desirable.

RELATED ARTICLES
What is Denormalization? By Chris Kempster ( http://www.sqlservercentral.com/articles/Advanced/whatisdenormalization/1204/ )

Views are a valuable tool for the SQL Server Developer, because they hide complexity and allow for a readable style of SQL expression. They aren't there for reasons of performance, and so indexed views are designed to remedy this shortcoming. They're great in certain circumstances but they represent a trade-off, and they come with considerable 'small print'. Jes Borland explains.

If you are using indexed views and MERGE, please read this!

Here is some information about an important MERGE “wrong results” bug, involving indexed views, that could be affecting the accuracy of your queries right now, and what options you have for working around the problem.

This article will show you the importance of Indexed Views and how they can help performance.

Views can be an effective tool for speeding up your selects and simplifying complex queries. Learn what indexed views are, where you might want to use them, how to create them, and what constraints exist with their use.