In one of the first articles I wrote for SQL Server Central, I talked about SQL NULLs

In this article I take it all back...

No, not really, but stay tuned as we talk about the darker side of ANSI NULLs. 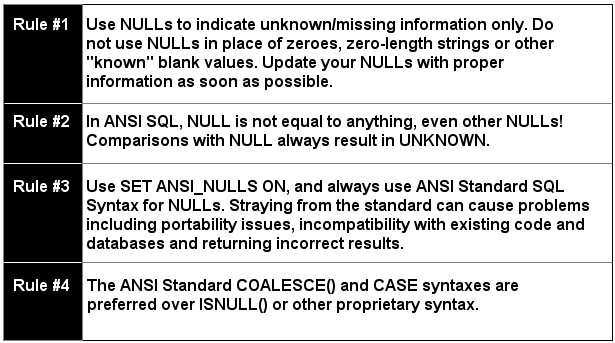 The rules are handy guides for handling NULLs in T-SQL, but NULL-handling isn't always

so cut-and-dried. In this article we'll take a look at where Rule #2 - the basis of the ANSI

SQL three-valued logic we discussed in the first article - breaks down.

No Two NULLs Are Created Equal...

If you recall from the original Four Rules

article, the basis of ANSI SQL three-valued logic (3VL) is that NULL is not equal to

anything else. It is not less than, greater than, or even unequal to anything else either. Because NULL

is not an actual value, but rather a placeholder for an unknown value, all comparisons with NULL result in UNKNOWN.

Even comparing a NULL to another NULL is just comparing two placeholders for unknown values,

so the result again is UNKNOWN.

We even generated some samples to demonstrate this. One of these samples is reproduced

Listing 1. Demonstrating that NULL is not equal to NULL

NULL: Confusing the Smartest People in the World Since (at least) 1986

If all this doesn't hit home immediately, don't take it too hard. Even Microsoft seems

to have difficulty sorting through it. Point in fact: SQL Server 2005 Books Online

with NULL is either FALSE or NULL. Only two pages that I found

(the pages describing "IS [NOT] NULL" and "SET

ANSI_NULLS") actually got it right. Fortunately we know better: the result of comparing

NULL with anything is UNKNOWN.

So why all the confusion? Most likely it's because in queries only rows for which the

WHERE clause condition evaluates to TRUE are returned. Rows that evaluate

to FALSE or UNKNOWN are not returned. For some folks this might seem to indicate FALSE and UNKNOWN are

equivalent. They're not, as we'll see in Listings 2 and 3.

Listing 2. Sample SELECT with NULL comparison in the WHERE clause

The result above of course returns no rows. According to Books Online this is because

"id = NULL" evaluates to FALSE. If this is true, however, Listing 3 below should

Listing 3. The "opposite" of Listing 2

If "id = NULL" really evaluates to FALSE for every row, then

"NOT(id = NULL)" should evaluate to TRUE for every row. Of course it doesn't,

and again no rows are returned. And we already know the reason: it's because

...All NULLs Are Created Not Distinct

or FALSE, that NULL is never equal to NULL, and that NULL comparisons always result in

UNKNOWN... Now it's time to list the exceptions. (You didn't think it would be that simple did you?)

I really wanted to call this section All NULLs Are Created Equal, but that just happens to be wrong.

In order to simulate NULL equality, and to keep from contradicting themselves

in the process, the ANSI SQL-92 standard decreed that two NULL values

should be considered "not distinct". The definition of not distinct in the

This simulated NULL equality is probably most used in the

GROUP BY clause, which groups all NULL values into

a single partition. SQL-92 defines a partition as a grouping of not distinct values.

Listing 4 below shows GROUP BY handling of NULL.

Listing 4. GROUP BY and NULL

Figure 2. Result of GROUP BY with NULLs 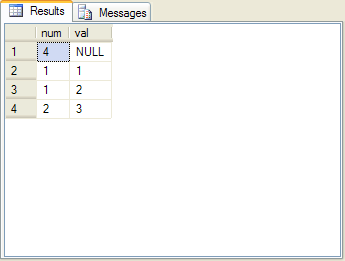 Notice the NULL values are all treated as not distinct by

GROUP BY, and are all grouped together. Unique constraints also

you can only insert one NULL in a column with a unique constraint. Consider

Listing 5 which shows this.

in the val column:

The ORDER BY clause in SELECT

queries places all NULL values together when it orders

your results. SQL Server treats NULLs as the "lowest possible

values" in your results. What this means is NULL will always come before

your non-NULL results when you sort in ascending order, and after your

non-NULL results when you sort in descending order. Listing 6

shows ORDER BY and NULL in action.

Listing 6. ORDER BY and NULL

The results are shown in Figure 3.

Figure 3. Result of ORDER BY with NULL 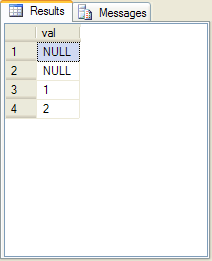 The same holds true for the ORDER BY clause of OVER,

And Now For Something Entirely Different

Now that we've established the "exceptions" for NULL comparisons,

let's look at something entirely different. When a NULL value is inserted into a

nullable column with a check constraint that doesn't check for IS NOT NULL, something

You and I know from 4th grade math (remember number lines?) that there is no value

that can ever fulfill these requirements. No value can be less than zero, equal to

zero, and greater than zero all at the same time. Also based on what we've already

talked about, any comparisons with NULL result in UNKNOWN.

You might expect an attempt to insert any value into the table would fail.

However, check constraints operate under a different set of rules from the SELECT,

TRUE. The DML statements will exclude rows that evaluate to FALSE or UNKNOWN.

Check constraints, on the other hand, cause INSERT and

UPDATE statements to fail only if the check constraint condition evaluates

to FALSE. This means that the checks will succeed if the condition evaluates to

either UNKNOWN or TRUE.

Of course you'd probably never create a check constraint as restrictive as the one in the example, and

if you want to prevent NULLs from being inserted into a column, either declare

the column NOT NULL or add "val IS NOT NULL"

cause an INSERT or UPDATE to fail.

NULL handling hasn't gotten any easier since the Four Rules

article, but it helps to know the exceptions as well as the rules. This article was written to demonstrate

The second part of Steve Jones's series on programming and manipulating strings in T-SQL.

The fifth part of Steve Jones's series on programming and manipulating strings in T-SQL dealing with STUFF.

Sp_MSforeachdb gives a DBA the ability to cycle through every database in your catalog. Find out how to use it.

Is there such a thing as a task where you would not need a cursor? Hidden in the depths of the master database are a series of stored procedures that can replace some cursors with these one-liners.