I've had several clients now that have requested a stored procedure that will return records based on key words entered by a user. There can be one or many key words and all have to match in order to match the item or product. I used to do this using a LIKE '%keyword1%' AND LIKE '%keyword2%' type of query using Dynamic SQL.

Using the LIKE operator like this on a large table can make for a long running query since no indexes can be used. A search query on an auto parts table with 1.2 million items took over 30 seconds to run for one of my clients. I developed a technique that would index each word in the item description in another table and use that for a search procedure. The average run time on that procedure is now 1.5 seconds.

In this article I'm going to use the AdventureWorks database to build such a table and show how to use it. Keep in mind that there isn't much performance gain in this example since AdventureWorks had just over 500 products in it. ( I would never bother with this technique on a table that small.)

There are 2 tables that you have to create: KeyWordItems and KeyWordsToExclude. The first table has the primary key of the product or item table - in this case ProductID from Production.Product. The second table contains words that you want to ignore. This could be 'a', 'an', 'the' and so forth. Another type of word to ignore in most cases would be any single character word, which would exclude such things as '&' or "#" if there are spaces on either side.

Here is the code to create and populate the KeyWordsToExclude table:

Here is the KeyWordItems table:

In order to populate the KeyWordItems table, you should have Jeff Moden's table valued function - DelimitedSplit8KNEW. It is lightning fast and I'm including it here for simplicity (I hope Jeff doesn't mind).

Now we come to actually populating the KeyWordItems table. There are a few quirks in the AdventureWorks product names. Slashes are used to separate some words - e.g. 'LL Mountain Seat/Saddle'. Also some product names have commas after a word - e.g. 'Mountain Bike Socks, M'. This type of punctuation is not likely to be entered by a user searching by product name and so needs to be ignored. In the code below there are 2 REPLACE functions that will replace a '/' with a space (which makes it a separate word) and strip out commas.

It is VERY important to note that the SAME logic that is used to populate the KeyWordItems table must be used when handling the user input - i.e. the same punctuation handling, the same ignored words, the same restriction on no single letter words, etc. Otherwise you may end up where something that should match that won't match.

Once the key words table has been created it will have to be maintined either in a procedure or trigger when an update occurs to the column you are using for the words (item description, product name, etc.). If any change is made to that column the procedure or trigger should delete and re-add the key words using the same logic that was used to initially populate it.

Now for some actual queries.

Here is a typical query for 2 key words - usually created in Dynamic SQL - that would search the Products table. 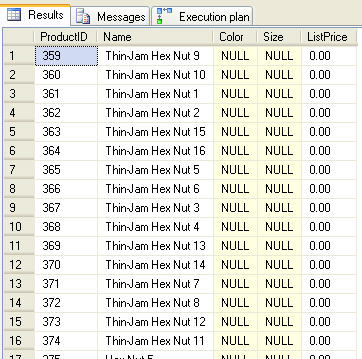 The important point above is the table scan on the Product table. This is what the query plan for the above query looks like:

Here is the procedure that will do the search using the new key word tables:

Now we run the stored procedure for the same key words:

This produces the same results as the original LIKE query. Here are the stats for the procedure:

The important part of this is that there is no Scan count on the Product table. Here is what the actual query plan looks like:

Note that we get a Clustered Index Seek on the Product table instead of a scan.

As I mentioned before, since AdventureWorks only has just over 500 products, this technique doesn't do much. When I used it against an item table of auto parts of over 1.2 million the performance differences was astounding.

This technique is most useful for searches where all criteria (and AND condition) must be met in order to qualify for a match. I hope someone finds this useful.

Splitting Strings Based on Patterns

Splitting strings based on patterns supported by LIKE and PATINDEX can be an interesting way to address a wide variety of problems.

String searching and manipulation in SQL Server can be error-prone and tedious...unless you're armed with the techniques described in Robyn's string manipulation workbench, here newly revised with extra material from collaborator Phil Factor

Unlike other relational database management systems that shall remain nameless, SQL Server's underlying coding language, T/SQL, does not have a built-in function for padding string values. I recently took it upon myself to create my own and as you'll see I got a little carried away