Our ability to track changes to our data effectively is critical in refreshing the data from the source systems in data warehousing applications. In earlier days, the change tracking mechanism was often implemented by simply using the 'Last Updated DATETIME' column in the source system tables to determine the rows that have been changed since the previous refresh. While this is simple and pretty effective in determining the newly Inserted/Updated data, it is of no use in determining the rows that were physically deleted from the table. Besides this, we can't determine what data was changed when; we can only access the current state of a row that has changed. In order to maintain the before and the after image of data, one has to implement this mechanism with the help of triggers, requiring a lot of development effort. Change Data Capture (CDC), which is new in SQL Server 2008, provides a configurable solution that addresses these requirements. We could consider CDC to reduce our ETL time in data integration projects requiring the regular extraction and loading of a huge amount of data from one system to another system or systems.

Change Data Capture (CDC) is a new feature available in the Microsoft SQL Server 2008 Enterprise & Developer versions. This feature facilitates the ability to record all data modification activities such as INSERT, UPDATE, and DELETE as applied to SQL Server tables in an easily consumable format. The column information is captured for the modified rows, along with the metadata needed to apply the changes to a target environment. In this process, the data is captured asynchronously (implemented with the help of SQL Agent jobs) by reading the database transaction log. Since it is an asynchronous process, it has a low impact on the performance of the system. This process is more efficient than the previous replication methodologies and it is particularly effective as we scale up on the database size.

1. Create a database with name 'TestDb' and enable CDC.

A new column is_cdc_enabled is added to sys.databases table. To check whether the CDC has been enabled for a database: 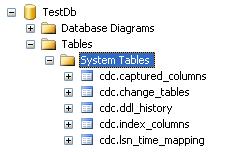 1. Enable CDC for the table

Assume we have a table 'Employee'; enable CDC for the table, as below –

@source_schema = Is the name of the schema to which the source table belongs. source_schema is sysname, with no default, and cannot be NULL.

@source_name = Is the name of the source table on which to enable change data capture. source_name is sysname, with no default, and cannot be NULL.

source_name must exist in the current database. Tables in the cdc schema cannot be enabled for change data capture.

@role_name = Is the name of the database role used to gate access to change data. role_name is sysname and cannot be NULL. If the role currently exists, it is used. If the role does not exist, an attempt is made to create a database role with the specified name.

@supports_net_changes = Indicates whether support for querying for net changes is to be enabled for this capture instance.

If 1, the system function to query for net changes is created in addition to the system function to query for all changes. If supports_net_changes is set to 1,index_name must be specified, or the source table must have a defined primary key. The columns defined in index_name or in the primary key are used to uniquely identify a row in the source table. These columns are added to the table cdc.index_columns.

@captured_column_list = Identifies the source table columns that are to be included in the change table. captured_column_list is nvarchar(max) and can be NULL. If NULL, all columns are included in the change table. Column names must be valid columns in the source table. Columns defined in a primary key index, or columns defined in index_name must be included.

captured_column_list is a comma-separated list of column names. Individual column names within the list can be optionally quoted with either 'or []. If a column name contains an embedded comma, the column name must be quoted.

captured_column_list cannot contain the following reserved column names: __$start_lsn, __$end_lsn, __$seqval, __$operation, and __$update_mask as these are the metadata columns to allow interpretation of the change activity in the 'change table'.

@capture_instance = Is the name that you assign to this particular CDC instance; you can have up two instances for a given table. (default:schema_sourcetable)

To check whether the CDC has been enabled for a table:

Note: If you make any schema changes to the table, you need to disable CDC at the table level and then re-enable it in order to capture changes to the data for the new columns.

To disable CDC on a table -

(or 'all', if you have more than one capture_instance name)

When the first table in a database has been enabled for change data capture, two new jobs are created and started by SQL Server Agent, as mentioned below"

The cleanup job is created using the default values when the first table in the database is enabled for change data capture.

This job scans the database transaction log to pickup changes to the tables that have CDC enabled. The first step of the job is to raise an error event to the client indicating the start of the change data capture session using the T-SQL command RAISERROR(22801, 10, -1) and queries sys.messages for id = 22801. Once this is done, it executes the system stored procedure [sp_MScdc_capture_job] to start the Change Data Capture Collection Agent.

Please note that the capture job should be kept running in order to capture changes to the source tables and the cleanup job is scheduled to run at regular intervals to remove the data from the change table. If the SQL Server agent or the capture job is stopped for any reason, all the changes that happened during this period will get captured from the transaction log when the job is started again.

This table contains some book keeping columns such as __$start_lsn, __$end_lsn (always populates with NULL; may be there for future use), __$seqval, __$operation, and __$update_mask.

The column __$operation has various codes as shown below –

Update (row with before image) – 3

In general, querying for all changes is more efficient than querying for net changes. If, for example, you know that the change data will consist entirely of inserts, a query for all changes using the 'all' row filter option and a query for net changes using the 'all' or 'all with mask' option will return essentially the same resultset. The performance of the cdc.fn_cdc_get_all_changes_<capture_instance> function, however, is likely to be significantly better. If a primary key or unique index is not defined for a table, only queries using the cdc.fn_cdc_get_all_changes_<capture_instance> function are supported.

The function cdc.fn_cdc_get_net_changes_<capture_instance> returns only one change per row. If multiple changes are logged for the row during the request interval, the column values will reflect the final contents of the row.

Data is requested for changes having commit log sequence numbers (LSNs) that lie within a specified range. If a source row had multiple changes during the interval, each change is represented in the returned result set. In addition to returning the change data, four metadata columns provide the information you need to apply the changes to another data source. Row filtering options govern the content of the metadata columns as well as the rows returned in the result set. When the 'all' row filter option is specified, each change has exactly one row to identify the change. When the 'all update old' option is specified, update operations are represented as two rows: one containing the values of the captured columns before the update and another containing the values of the captured columns after the update.

Capture the change data based on time range:

Cleanup of change data: The data in the change table should be cleaned periodically as the table size grows very rapidly. The SQL Server cleans data in the change table for every 72 hrs which is configurable by the system administrator by updating the column msdb.dbo.cdc_jobs.retention. If you want the change data to be available for the analysis purposes even after 72 hours, we need to implement our own mechanism for archiving this information at regular intervals.

This paper discusses the implementation of Change Data Capture in SQL Server 2008 and how it is superior to the traditional change tracking mechanisms in the context of data warehousing applications.

The design pattern described in this article can be used to develop very efficient CDC operations in large scale implementations.

A two part article on Change Data Capture for field level auditing and marting that data using SSIS for reports.

Change Data Capture (CDC) is a new native feature in SQL Server 2008 Enterprise Edition. This article shows how to use CDC to easily set up data auditing on your SQL Server system

Yan Pan illustrates how to obtain data changes using the CHANGETABLE function and presents two algorithms that you can implement in your .NET application using Sync Services.