This article will help you to generate an ordered, distinct, delimited string in a single query using an XML. An ordered string here does not mean an alphabetical order or numeric order of the values in a delimited string. An order means the sequence in which the data was stored. A sequence of data can be determined from the fields like timestamp, identity column or any such column. A list of values is retrieved in some order and these values are separated by a delimiter.

In this article, I will consider a Project Management System (PMS). In PMS, more than one project may be assigned to a user. The users may have different roles. The relationship between user, role and project is stored in a table (UserID, RoleName, ProjectId, RoleAssignedDate). I will generate a report having the list of users with the order in which the roles were assigned to them, excluding the project names, i.e. only user and assigned roles. We will use the power of an XML to get an ordered (latest RoleAssignedDate), distinct (remove duplicate data), delimited (Comma separated value) string in an optimized way.
There are two constraints for generating this report:

A script to create a table and insert data is as below:

To generate a CSV string for each user, what I did is, first selected distinct roles appended with a delimiter "," that matches each UserID of main SELECT statement with the SELECT statement of FOR XML PATH. In each CSV, "$" is appended at last so that exactly last comma ",$" is replaced with a blank.

I will generate the CSV data in the order of the roles that were assigned to each user.

But this gives me an error!!
"Msg 145, Level 15, State 1, Line 54
ORDER BY items must appear in the select list if SELECT DISTINCT is specified."

To get an ordered, distinct, delimited value, what we can do is first give an identity number for each role related to the UserID, ordering the roles based on the date they were assigned. This can be achieved using ROW_NUMBER() ranking function.

Note: This solution is for SQL Server 2005 and above versions. 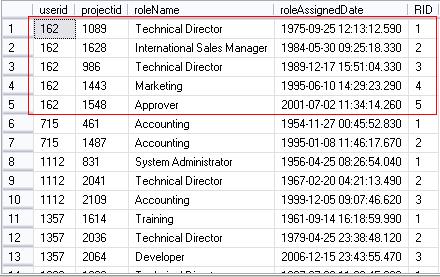 Figure 3: Assigning an identity for each row partitioned by UserID

ROW_NUMBER() function returns sequential number for each row in a partition of the rows where the UserID is same such that the latest date is first in each group.

After this an XML document having <Roles> and <RID> nodes is created using FOR XML PATH for each UserID. This XML document has nodes in the order RID was generated.

I will use an XQuery to retrieve data from the generated XML documents for each userId. The Query() method is used to read data from <Roles> element. In the above XML document, Role: 'Technical Director,' is repeated for 162 UserId, but have different RID. The report needs distinct role names, for this distinct-values, an XQuery function is used to remove duplicate values from the sequence. There is an extra comma appended after every CSV string, so the last comma is removed using left() string function from each CSV string. The final single T-SQL query is:

ROW_NUMBER() gives a sequence number to each row partitioned by UserId. Then create an XML document containing that sequence number and the column for generating a CSV string. Then with the help of XQuery, retrieve the column data. Using distinct-values function gives unique values in each CSV.

Now you can easily generate an ordered, distinct, delimited string using ROW_NUMBER() and FOR XML PATH. Thanks to XML !!!

If you have any questions related to this article or have any other solutions, please feel free to share.

This article demonstrates how to generate an XML stream from SQL Server using the 'FOR XML PATH' statement, and how to explore that XML stream interactively using an XSL transformation.

The OLE DB Simple provider for XML (XML OSP) can be used to load the hierarchical data that is in an XML document into a read-only ADO recordset. The data can then be read and accessed by using the standard methods of the ADO Recordset object. The XML OSP can be used to provide a different method for working with data that is contained in XML documents.