Microsoft and RevolutionR have teamed up to bring the power of R and in-database analytics to SQL Server 2016. This seems to be part of a series of moves by Microsoft to provide rich tools for data science and advanced business analytics including Azure Machine Learning (with flexible integration of both Python and R) and big data database technologies such as DocumentDB, HBase and HDInsight.

Configuring R Services for SQL Server 2016 is a little bit of a maze, with various parts scattered about MSDN. In this article we will try to gather together the simplest and most straightforward instructions from MSDN to get help you get R Services configured. Then we will cover the anatomy of in-database analytics including the connection string, data source, and compute context. First though, there are perhaps two important questions: why R? and, why in-database analytics?

R is arguably the language of choice for many statisticians and data scientists and enjoys a vibrant and active community of developers and supporters. Python is perhaps R's greatest rival, with Python's SciKit Learn library providing exceptional machine learning capabilities. However, R still provides the most robust and comprehensive collection of statistical tools. For database developers, R's functional programming style and heavy use of matrices / data frames is a natural fit with the set-based paradigm of SQL.

Revolution R is a proprietary implementation of R that is primarily designed to bring the flexibility of R at an enterprise scale. Revolution R supports the full range of R functionality, including the addition of packages via R's CRAN repository. In addition, Revolution R have redeveloped many of the core features of R to provide high performance parallel processing. Thankfully Revolution R also offer an open edition which we will use in this article.

Reading through the forums and following the discussions on various MOOCs, R can be a challenging language to learn. R's syntax is C-like but with some curious oddities which are unique to R. But more than this, R was primarily designed to do statistics - something it does sensationally well. R provides a rich set of functions and algorithms for statistical analysis in addition to the more typical programming structures. So in addition to the basic syntax, to wrangle R you should expect to learn a reasonable amount of statistics and dedicate yourself to learning to interpret statistical results.

When we think about data processing, we commonly have two options: move the data to the processing nodes or, push the processing out to the data. As we being to tackle larger and larger problems, it becomes increasingly costly to move the data around and instead we need to consider ways of processing the data near to its source. This is the very idea on which MapReduce was founded - minimize the data movement and maximize the use of distributed computing. By pushing analysis out to the database, in-database analytics is able to minimize the costs of data transfer, leverage the performance of the database engine, and allow analysts to run models against much larger datasets than they could on a single machine alone.

Even more powerful perhaps, is that 'in-database' is not restricted to SQL Server. As well as SQL Server, Revolution R has a consistent interface for NoSQL and Hadoop systems which opens the possibility for intelligent big data applications.

Configuring R Services requires a few different steps, but it shouldn't take long to get up and running. R Services is simply another feature which you can select to install alongside SQL Server, and from there getting up and running is pretty straight forward. In the rest of this article we will very quickly cover the prerequisites and the install process and we will spend more time discussing how to get started with in-database analytics in SQL Server 2016.

If you have managed to get through the setup, then you are ready to develop models in R and run these against the data stored in your database. There are three common ways to run models in R with SQL Server:

Below we will cover the second option and develop models from Revolution R's IDE and push the analyses out to the database. We will cover the anatomy of in-databases analytics under this model which includes three important things: the connection string, the data source, and the compute context. This discussion extends on the preview of Revolution R Enterprise in SQL Server by Andre de Vries.

Next you need to declare the data source - the table or view which you wish to analyse. According to MSDN, the function RxSQLServerData() provides "improved data connectivity [from R] to SQL Server" (Data Exploration and Predictive Modeling with R).  For our example, we have created a view of dbo.FactCallCenter in AdventureWorkDW2012 which we can access from R:

There are three parameters passed to RxSqlServerData(). The first is our connection string. The second is the name of the table or view where the data is stored. The third, colInfo, is essentially a table definition for the table / view. If you do not specify the datatypes in colInfo, then R will take the datatypes straight from SQL Server. However, later on we will use regression to predict the number of orders per day, and this requires that the Orders and DayOfWeek columns be treated as categorical data (factors) instead of character data.

The compute context is what we are really interested in here. Using the function, rxSetComputeContext(), you are telling RevolutionR where and how you would like the data processing to be executed. There are a number of different execution contexts supported at the moment:

These options are reasonably self-explanatory: they define where the analysis is to be done (e.g. locally, in Teradata, in Hadoop or in SQL Server) and also define whether to run the operations in parallel or not (in the case of local execution). Revolution R maintain documentation for each of these options, which you can view by typing "??computeContext" in the R console:

It is interesting looking over these various options. We can see that Revolution R provides a convenient interface to a variety of database technologies and is able to leverage the processing power that is native to each of these. For example, the Hadoop context will make use of MapReduce and the SQL Server context will use the query optimizer (to read data) and the parallel processing power of SQL Server.

There is a slight caveat here as noted on MSDN:

This then is the final step to enable analysis in SQL Server:

Now, any analysis or modeling you perform (using functions from Revolution R) will be run at the database and only results will be returned to the console. Below, we look at a very brief example.

As a simple example on in-database analytics we will run a regression model on the data in FactCallCenter in AdventureWorksDW2012. We will use the connection string, data source and compute context defined above to predict the number of calls received each day of the week: 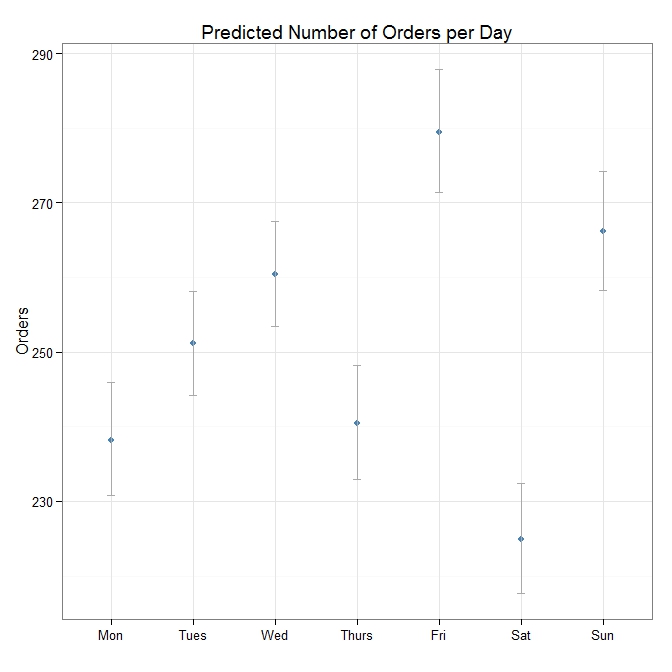 The plot above shows the expected number of orders per day of the week, with 95% confidence intervals. Ideally more work would be required to verify this model and perhaps compare it to other models - but in terms of demonstrating in-database analytics with SQL Server 2016 and Revolution R, I think it serves the purpose.

Personally, I think that the integration of R with SQL Server 2016 is an incredibly exciting move from Microsoft. R provides enormous potential to analyze, explore and visualize the data in SQL Server - I can't think of how many times this might have been useful to understand the data or to help identify performance issues from DMVs etc. I do worry about the potential performance costs of in-database analytics and it will be interesting to see how this develops. But on a data warehouse, or a readable secondary perhaps the performance drain won't be too critical. If you're playing around with this too, I would love to know what you think and how you see yourself using this!

We show how to use RevolutionR to analyse & visualise purchasing behaviours in AdventureWorksDW2012.

It is possible to do a great deal with R within SQL Server, but it is best to start by doing analysis in R on numeric data from SQL Server and returning the results to SQL Server. There is great value to be gained even with this basic foundation. Robert Sheldon is on hand to give you a kick start with the first in his series on beginning with R in SQL Server.

Getting Started with R Services in SQL Server 2016 – Part 2

Getting Started with R Services in SQL Server 2016 – Part 1

Rajendra Gupta takes a look at the additional enhancements made to Row Level Security in SQL Server 2016 CTP 3.1 and explores the new features with examples.