Installation for SQL Reporting Services on a Windows 2003 Cluster

By Tom Lodermeier and Zach Mattson

Installing SQL Reporting Services on a single machine is a relatively easy task. There are several excellent articles that take you step-by-step through the process of installing Reporting Services on a single machine. However, what happens when that reporting server picks a work day to call in sick? Will you be there to setup a new machine and get your reports up and running? This is the reason that Microsoft has provided us with a failover cluster.

install. The generally accepted and documented method for handling failure is to utilize a load balanced web farm

databases on a failover cluster. The beauty of the generally accepted solution is that you have to buy additional

Note: Microsoft licensing can be complex, the reporting services licensing is explained here.

Given our division’s tightening budget, and our desire to forge new frontiers in undocumented processes, we

wanted to install the reporting services (IIS, ASP.NET) and the databases on

the same cluster. I don’t recommend this approach if you are using URL access to your reports from the internet, as your database could be exposed. We are using SOAP to get our reports in PDF format to our application server so the cluster is protected from the outside world.

Installation procedures for the cluster are well documented. Essentially you install the OS on the active and passive nodes;

then setup the cluster administrator on the virtual server. After this has been completed, install SQL

Server and get your database files setup on the SAN. Once your SQL Server has been installed, go to the active node

active node. Be sure to put the databases on your clustered SQL Server and files on the SAN drive.

For clarity, the “active node” is the first node you install on the cluster,

the subsequent node, is referred to as the “passive node”. Typically, in a clustered environment, the

node that is handling the work is the active node, and the node standing by is

Server and SAN drives). The passive node’s installation is pretty much the same as the active node.

The caveat is upon pointing the reporting databases to the clustered SQL Server, the Web Farm Setup screen appears

(figure 1 below). The key to making this installation successful is entering the active node’s machine name (the

first node you installed in the cluster) where it says Report Server. The reason why you need the name of the active

node is due to the encryption of the DSN name in the RSReportServer.config and

the matching key that resides in the ReportServer database. By giving the active node’s name, the

Server. The rest of the installation is normal. 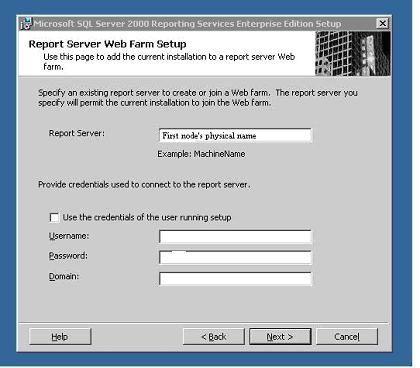 The benefits of this installation are that

the costs of additional licenses setup in the web farm method. In our tests, the failover only took about

15 seconds to bring up the passive node and start serving reports. It sure beats hurrying an installation of Reporting

Services under heavy pressure from management and users!

There are a few downfalls of our method. First, you won’t see the performance or

scalability of a load balanced web farm. Second, the time delay that it takes for the failover to switch will

also not exist in a web farm solution and finally, your database cluster will

have additional workload serving the reports so database performance could

The failover cluster all-in-one solution may be just the

Working with a new piece of technology can be intimidating. Not having the technology installed correctly can only lead to more difficultly. This guide outlines steps to properly install SQL Server 2005 Reporting Services and the current service pack to get you going in the right direction.

The report models introduced in SQL Server 2005 feature a number of ways to customize the data visible to different users and groups: perspectives, model item security, security filters, and opaque expressions. This article describes when and how to use each of these features.

In working with many reporting tools over my career, particularly within enterprise business intelligence suites and high-end production reporting systems, I have become acquainted with various control features in each that allow administrators to govern the actions of end users. Reporting Services is no different in this aspect of need for control, and the application provides numerous avenues for restraining our users from kicking off resource crippling queries that, unchecked, could disrupt even the most robust systems, as well as to prevent other harmful activities. At various junctures within this series, we will examine ways to effect such controls on an intermittent basis.

We introduced our previous article, Prepare the Execution Log for Reporting, with a discussion about a valuable source of information for performance and auditing analysis, identifying the Report Server Execution Log as a great place to start for this sort of reporting. We noted that the Execution Log captures data specific to individual reports, including when a given report was run, identification of the user who ran it, delivery destination of the report, and which rendering format was used, among other information.

In this chapter, we discuss various installation setups you can use to install and configure Reporting Services. For the most part, this process is managed by the Setup.exe installation wizard, so expect to be prompted for a number of configuration options that determine how, where, and whether each segment of the Reporting Services package will be installed. We know that there are a variety of ways to install Reporting Services, so we've tried not only to address the common case, but also provide hints and techniques to be used for some of the more sophisticated installation scenarios. To make this process as painless as possible, we've broken this chapter down into several sections: