Try asking your colleague what is the difference between business intelligence

and a data warehouse. I find that a lot of people, even those who work in BI projects

and BI industry, do not understand the difference. A lot of people use these

2 terms interchangeably. Some people even prefer to use 1 term instead of the

other because it simply "sounds better". Many people think that business

intelligence is not just a data warehouse, but there is more to it. But when

asked "what business intelligence systems are not data warehouse systems?"

or "what part of business intelligence systems are not data warehouses?",

most of them have difficulties explaining the answer.

These days, "business intelligence" is the norm used by most vendors

in the industry, rather than "data warehouse". Most of them call /

The name of Cognos

label themselves as "BI software company" and "global leader

in BI software". The name of one of Hyperion

promotes SQL Server 2005 as the end-to-end business intelligence platform. It

seems that only Kimball Group who

Inmon, as the inventor of this term, also uses the term data warehouse.

So, let's get into the details. This is an example of a data warehouse system: 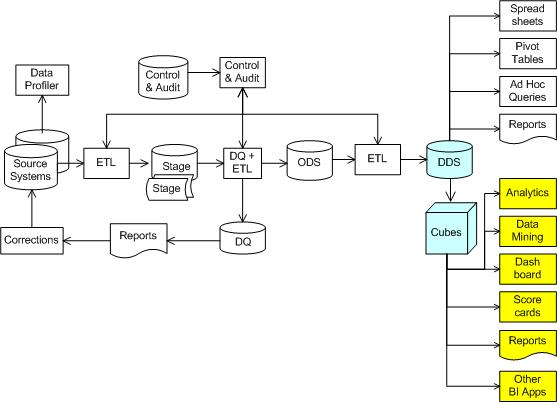 It includes ETL from the source system, front end applications (those 10 boxes

on the right hand side), and everything in between. It has a control system,

an audit system and a data quality system (also known as data firewall). Not

all data warehouse systems have all the components pictured above, for example,

some data warehouse system may not have operational data stored (ODS), see this

The 2 blue items are data warehouse databases. The cylinder is in relational

format (labelled as dimensional data store, DDS for short), the box is in multidimensional

format (labelled as cubes in the picture above). This blue cube is also known

as on line analytical processing cube, or OLAP cube for short.

applications take data from multidimensional format data warehouse, but some

do take data from the relational format. The whole diagram above is also known

Some business intelligence applications take data directly from the source

system. For example, some dashboard systems may get sales summary data from the source

system and display it in gauge meter format. In this case, we can not call the

system a data warehouse system. It is still a business intelligence system,

database behind the gauge meter application.

Business intelligence systems, in the past also known as executive information

systems, or decision support systems, are a non transactional IT system used to

by top executives and managers. Many

from Dr. Jay Liebowitz is arguably one of the better ones. Most people agree

data warehouse systems. Yes, there are business intelligence systems that do

not use OLAP or data warehouses, as illustrated in the example of gauge meter

application above, but they are more rare than the ones with OLAP or a data warehouse.

According to Ralph Kimball, in his book The

Data Warehouse ETL Toolkit, a data warehouse is a system that extracts,

cleans, conforms, and delivers source data into a dimensional data store and

making. He stressed that a data warehouse is not a product, a language,

a project, a data model or a copy of transaction system. In an interview

with Professional Association for SQL Server (PASS) on 30th April 2004,

he explained about the relationship between data warehousing and business intelligence.

In their latest book, The

use the term DW/BI system throughout the book. This is understandable because,

as I describe above, most business intelligence systems are in the form of a

Bill Inmon, who invented the term

integrated, nonvolatile and time variant for the purpose of management's decision

processes. He pointed that the term data warehouse was never trademarked or

copyrighted. As a result, anyone can call anything a data warehouse. He recently

defined a new term, DW 2.0, and this one is trademarked so nobody can change

the definition. He explained the architecture in his

article in dmreview, along with the differences between the first generation

of data warehouses and DW 2.0 and its advantages.

So, as a summary, back to the original question, what is the difference between

are based on data warehouse systems (the one with dimensional model, fact tables,

dimension, etc), but some business intelligence systems are not data warehousing,

i.e. taking data directly from the source system, like the example described

system) is the yellow boxes on the diagram above, i.e. the front end applications.

The data warehouse database (or sometimes people dropped the word database, so it

above, i.e. the dimensional storage, whether in relational database format or

If people say 'data warehouse', be careful because it can mean either data

the blue items). If people say 'business intelligence', it can mean either business

intelligence system (the whole diagram above, or a BI system without data warehouse)

I hope this article makes the terms clearer, but I am open to comments and

suggestions. As Ralph Kimball said, if you ask 10 different people what data

warehouse is you are likely to get 10 different answers.

Three Vs: Best Practices for a Unified Business Intelligence Infrastru

This article presents a broad set of guidelines to define the value, voice and visibility for a unified BI project.

Over the past few years, I’ve had the opportunity to discuss enterprise metadata to a wide variety of audiences and much of this conversation is captured in this “Best Practices” implementation framework. The model has evolved over the past few years as our program continues to do the same. Of course, this summary can only be a few pages long so the depth of the content here will be a tad shallow but you should be able to get the basics from the diagram and the description that follows. Figure 1 provides the new framework and the content follows to describe each section.

Slowly Changing Dimensions Are Not Always as Easy as 1, 2, 3

To kick off our first column of the year, we're going to take on a challenging subject that all designers face: how to deal with changing dimensions. Unlike most OLTP systems, a major objective of a data warehouse is to track history. So, accounting for change is one of the analyst's most important responsibilities. A sales force region reassignment is a good example of a business change that may require you to alter the dimensional data warehouse. We'll discuss how to apply the right technique to account for the change historically. Hang on to your hats — this is not an easy topic.

Before designing an ETL system, you must first understand all of your business needs.

Ideally, the design of your extract, transform, and load (ETL) system begins with one of the toughest challenges: surrounding the requirements. By this we mean gathering in one place all the known requirements, realities, and constraints affecting the ETL system. The list of requirements is pretty overwhelming, but it's essential to lay them on the table before launching a data warehouse project.

The requirements are mostly things you must live with and adapt your system to. Within the framework of your requirements, you'll have many places where you can make your own decisions, exercise your judgment, and leverage your creativity, but the requirements are just what they're named. They are required.

The Integration of Unstructured Data into a Business Intelligence Syst

This article discusses the challenges of merging unstructured data into BI systems and provides an example of such a merge to solve an organizational problem.