Recently, I did some troubleshooting and cleanup with a company on their mission-critical backend database server. One of the main processing tables was defined with an IDENTITY column, which had overflowed the upper boundary of the integer datatype within about 8 months of its implementation. Clearly, the table is central to a lot of processing! The column was only used as an organizing ID (no FK's, etc.) which, thankfully, made cleanup easier. I won't go into the details of the cleanup operation other than to say that the column datatype is now a bigint, and the table should now have no problems for the next 6 to 9 Billion years.

Once the dust settled, the next step was to double-check for any other tables that had a similar time bomb waiting to go off. What we needed was a way to find all of the IDENTITY columns in a given database and check their current values and datatypes. My first instinct was to "do the right thing" and use the INFORMATION_SCHEMA views to get the information (Figure 1). The COLUMNS view, however, doesn't express whether a column has the IDENTITY property. I couldn't find any indication that any of the other views had this information either. I'm no ANSI standards expert, but my assumption is that the reason for the lack of support in the views is that they're compliant with the SQL-92 version of the standard, and "autonumber" column support wasn't added until the SQL-99 version. 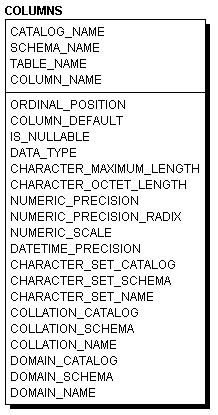 Since I knew that the sp_help system proc displays information on the IDENTITY column, I decided to look through the code to see how our friends at Microsoft determine this. Here's the relevant snippet:

Now that I had a way to find the IDENTITY columns, I was able to construct a query to show me the table name, column name, datatype, and current value (using IDENT_CURRENT):

Some digging around on the SQLServerCentral.com website turned up some additional information on keeping IDENTITY columns healthy. I found the following article and scripts:

I thought it would be interesting to catalog the various ways of determining if a column is an IDENTITY column. Here's what I found (and it wouldn't surprise me if I missed some):

Now that we have a script which will give us the values for all of our IDENTITY columns, we can periodically log the values to an audit table and project when the datatype might run out of "room" to represent the values. Of course, if one is dealing with an environment where IDENTITY columns are used prolifically, it makes sense to concentrate only on the most active tables--presumably those with the highest values. Using this technique, we did discover another table with an integer IDENTITY column that's already used up nearly 1/3 of the values available to an integer. We can now deal with this before it becomes a problem.

Help! My Database is Marked Suspect.

If your database is marked suspect, this will show you a step-by-step guide in how to fix the problem.

So you've created a diagram that you now need to transfer to a different server or database. This article will show give you a step-by-step guide on how to do this.

When transferring a database to a new server, you are bound to experience a user problem. In this article by Neil Boyle, he shows you how to transfer passwords and accounts seamlessly to a new server.