So what is it all about? Most of the time, columnstore indexes are described as a feature for data warehousing and reporting. And that is indeed the environment where you are most likely to find a good use for this new type of index. But even in OLTP databases, you might have a few reports that are slow, because they draw from very large tables. With proper planning and care, even those reports can benefit from columnstore indexes.

An important keyword in the previous paragraph is “very large”. Columnstore indexes are intended to be used with large tables. There is no hard minimum size, but as a rule of thumb, I would say that you need at least tens of millions of rows in a single table to get real benefit from columnstore indexes.

When talking about columnstore indexes, I am actually talking about a combination of two closely related new features. One is a different architecture for index storage, storing data by column instead of by row. In the next level, we will look at this architecture in more detail, and we will see how this reduces the storage size for large tables. The second new feature is “batch mode”, a new mode of query execution which is optimized for modern hardware. Batch mode will be covered later in the series.

For the demos in this series, I will use the ContosoRetailDW demo database, created by Microsoft, that can be downloaded from http://www.microsoft.com/en-us/download/details.aspx?id=18279. This is a 626MB download of a database backup, which restores to a 1.2GB database. This is a bit small for real columnstore use, but large enough to demonstrate the features.

On my laptop, the query in listing 1 takes, on average, about 6.27 seconds to complete when the required data is already in cache. If the data has to be read from disk, the execution time goes up 8.11 seconds. Since the FactOnlineSales table has over 12.5 million rows and this query has to scan the entire clustered index, which is actually not bad at all. But if you spend all day doing these queries, the sluggish response will quickly become a nuisance. And you can probably easily imagine how the performance would be for databases that are 10 times or even 100 times bigger.

Note that these execution times will vary based on the hardware used. If you repeat these tests on a high end server, all queries will run much faster. On a laptop you bought as a bargain three years ago, they will take more time. But you should see big savings after creating a columnstore index on all of those systems.

We will take a closer look at the syntax for creating nonclustered indexes later. Those who are used to minimizing the amount of columns in an index may be shocked to see all the table’s columns included in the list above. This, too, will be explained later. For now, please just accept that columnstore indexes have their own rules and guidelines.

Executing this code will take some time (I had to wait approximately 43 seconds for it to complete on my laptop). But this is a one-time action that in a real datawarehouse would typically be done during the nightly load. Once the index is created, it can be used by SQL Server to increase the speed of many queries.

What did we gain?

When I now run the code from listing 1 again, I get the same results as before, but the results are returned almost instantaneously. The query now finishes in about 0.34 seconds, more than 18 times faster than before I added the columnstore index. Of course, even with columnstore indexes the query will run more slowly if data has to be read from disk. With an empty cache, the query takes 1.54 seconds, still more than five times faster than the 8.11 seconds we saw before.

The performance gains from nonclustered columnstore indexes in SQL Server 2012 can be impressive, but you need to be very careful when writing your queries. Almost every query against a table with a columnstore index would find some benefit, but you may have to code around many limitations in order to get the full potential. One such limitation is related to outer joins.

If the information worker who wrote the query in listing 1 decides that all products of the Contoso brand need to be included in the results, even if they were never sold, the obvious change would be to change the INNER JOIN to a RIGHT OUTER JOIN, as shown in listing 3.

Without a columnstore index (or with the IGNORE_NONCLUSTERED_COLUMNSTORE_INDEX hint to simulate that situation), the query runs in 6.71 seconds when the data is already in cache. Changing an INNER JOIN to a RIGHT (OUTER) JOIN introduces some extra overhead in the execution plan, causing the query execution to take another 0.44 seconds, an increase of approximately 7%.

When running this query without a hint the optimizer will immediately pick a plan that uses the nonclustered columnstore index on my SQL Server 2012 instance, and this results (as expected) in a faster execution – approximately 4.24 seconds. This is of course still better than the 6.71 seconds without the columnstore index, but it pales in comparison with the 0.34 seconds I measured for the original query with an INNER JOIN. So why is the performance impact of changing an inner join to an outer join so much bigger when the query is using a columnstore index?

The reason for the big performance difference between inner and outer joins is that the speed gain of columnstore indexes builds on two components. The obvious one is the index itself. In subsequent levels of this stairway you will see how the structures used to implement columnstore indexes result in a massive reduction of I/O.

But much of the secret sauce of the better performance with columnstore indexes is achieved by using a new mode of query execution. This so-called “batch mode execution” represents a completely different way of executing queries, designed to remove a lot of overhead and optimized to take optimal advantage of the characteristics of modern hardware. But the SQL Server 2012 implementation of batch mode was very limited. Only a handful of operators are available in batch mode in SQL Server 2012. As soon as a query requires the use of one of the unavailable operators, all or most of the query will fall back into the traditional row mode execution. An outer join is but one of many language elements that will cause this fallback to row mode, where you still get the performance benefit that results from the I/O reduction of a columnstore index, but not the additional performance benefit of batch mode.

If the performance benefit you experience is less than you were hoping for, inability to use batch mode may be the cause. The quickest way to verify the mode being used is to bring up the graphical execution plan for the query in SQL Server Management Studio, then check the “Estimated Execution Mode” and “Actual Execution Mode” properties of the operators that process the most data. See Figure 1-1 for an example of a query running in batch mode. 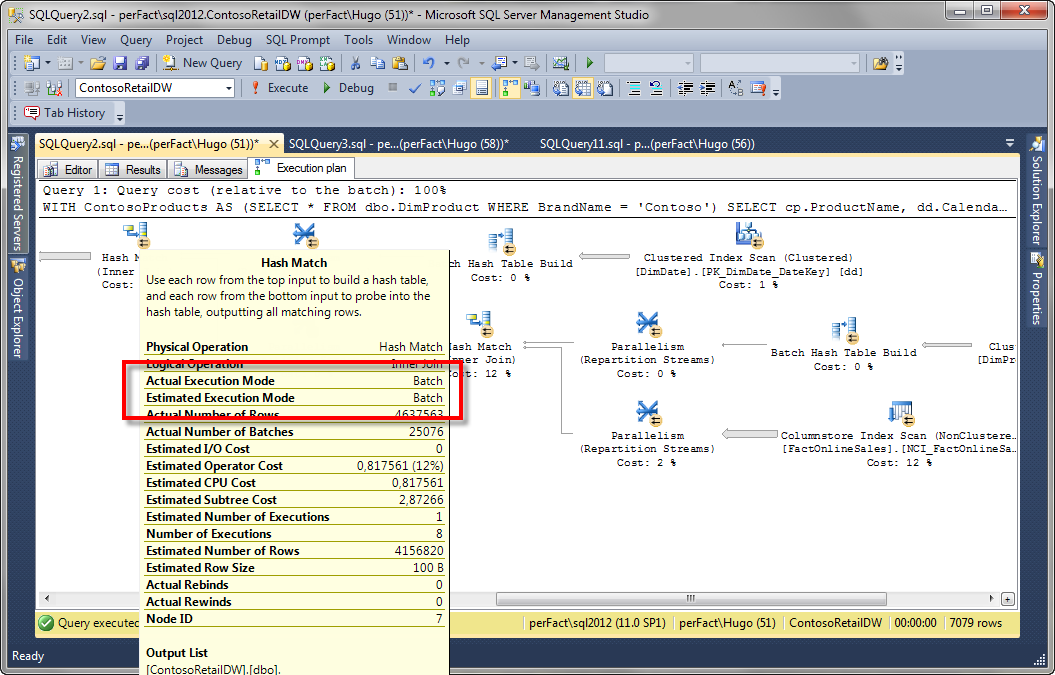 Later in this series, we will cover batch mode in more detail, and will discuss all the limitations. We will look at ways to rewrite queries to work around the limitations and maximize the benefit of batch mode execution.

What benefit can you expect?

In the rest of this stairway series, I will explain more about column-oriented storage and batch execution mode; I will demonstrate how to create and use columnstore indexes, what the limitations are, and how to work around them; I will discuss the improvements made in SQL Server 2014, including the new clustered columnstore index; and give tips and best practices for getting the most out of columnstore indexes in both versions.