The Stress of a Former DBA

At a recent SQL Saturday Jacksonville event, I was feverishly applying the finishing touches to my post-lunch "SQL Server BI" presentation, when I heard the familiar and unmistakable voice of my old and dear friend, Joe Mayes. We greeted each other warmly; we hadn't seen one another in too long, but it turned out Joe was now living in Jacksonville, had spotted my name on the agenda and come out to support me.As Joe probably suspected, I needed every minute I had left to polish up my slides and demo, but I was just too happy to see him to affirm his suspicions. I put the laptop to sleep and hung out with him through lunch.

"I love to share what I've learned", I told him, "but the stress kills me!" I do not necessarily enjoy public speaking. I am a perfectionist and a worrywart but also an epic procrastinator when it comes to actually preparing the slides. It is a potent combination.

I told him that I had one slide I hoped would make everyone laugh. It was a chart of my career path and the stress levels in each position, from a computer operator in 1995 to a DBA/BI consultant at present. I was eager to show it to him, to get his affirmation that people would like it, but instead we talked about our careers as we got older, where we wanted to be in 5 or 10 years, and how we both knew that one day we would collaborate on a creative project.

When my time came, I smiled nervously at Joe as the room filled…and filled. He had not been lying when he told me that he'd been directing people to attend my session all morning, as well as bringing 10 IT folks from his own company. My stomach flopped. I wanted it to be over and yet for that to happen I had to begin.I started with the Stress Chart and by the time I reached the stress spike that marked the start of my DBA career, the room was roaring with laughter. 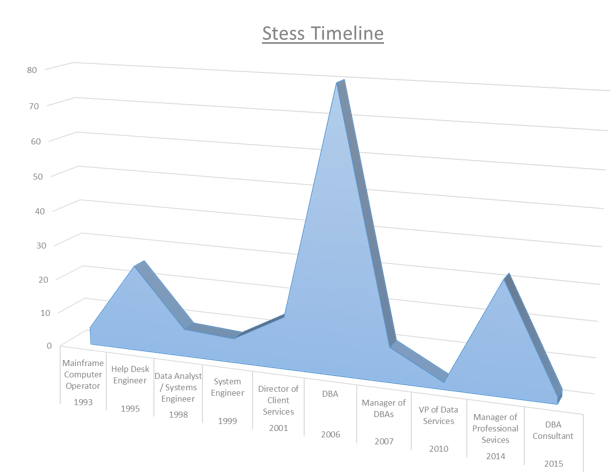 Awesome…I had them. The graph finished with my time as a BI consultant and report writer and I described how I'd learned the hard way how vital it was to pay close attention to the finer details, because every tiny aspect of a deliverable would be scrutinized. There was more laughter. They were really won over. All the subsequent live demos worked as planned, and I finished up with several questions from the audience.

Afterwards, I met Joe in the hall. "That went better than I had hoped," I beamed, "I think they really liked the chart. Do you think they got the importance of paying attention to the finer details?"

Joe looked at me as only a long-time friend could and said, "Yeah I think they got it. You know you misspelled 'Stress' on that chart, right?”

Rodney Landrum on his week of responding nicely to unsolicited sales calls.

What Counts for a DBA: Patience

Technical debt is frustrating but dealing with it requires patience. Louis Davidson explains why.

What Counts for a DBA: Amnesia

Louis Davidson explains why DBAs often need a healthy dose of selective, enforced amnesia about the pain of previous failures.

The story of how Shawn McGehee's journey to becoming a DBA started is just one among many thousands, so let's hear yours too!

During a "difficult period", a developer often sinks from view. When things are going well, suddenly they are the gunslinger, the hotshot. The DBA often looks on wistfully. For him, the "fame trajectory" seems to work in reverse.