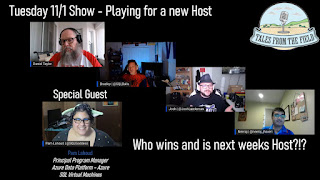 Hello Dear Reader!  Last week was Halloween and I hope you all had a fantastic time.  Halloween has long been my favorite holiday.  The cost of participation is imagination, activity, or a couple of bags of candy.  Anyone can do it.  It doesn't hurt that my daughter's birthday is on Halloween which makes it extra special!!

This we had the house decorated, table set up outside to give out candy to the neighborhood kids, and my kiddos were old enough that none of them needed me to walk them around to other houses.  This left me, for the first time in at least 19 years, sitting outside giving out candy. 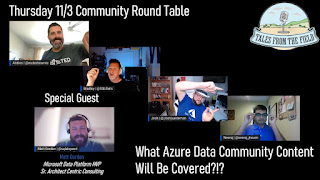 I learned a few things. First, we need a lot more fans.  Fans outside in Florida will create a cross section of air that will keep mosquitoes away.  It is not so much for the temperature, although it was close to 90 degrees.

Second, it is possible to get stung by so many mosquitoes that you have an allergic reaction. To mosquito bites that led to a wonderful 3 am *asthma attack and hive like welts appeared on parts of my body..... that were covered in clothing and inaccessible to mosquitoes.

*Not to worry though, as a lifelong asthmatic I had my rescue and daily use inhalers.  All that happened was I woke up, used them, made myself a cup of tea, watched RRR while my body relaxed, and my breathing returned to normal*

Third, and most important, I learned that maybe I just stay inside and give out candy next year.

Right you are Dear Reader, keeping me on track!  On to the show!

On Tuesday we had Pam Lahoud (Twitter | @SQLGoddess) Principal Program Manager from the Azure SQL Virtual Machine team as our special guest.  Pam talked with us about some of the really cool announcements they have coming up at the PASS Summit.

We also talked about the IOPs advancements that have been made and are coming to Azure SQL Virtual Machines!!  I wore a Spider-man costume.  Our good friend Dan Taylor (Twitter | @DBABulldog) guest hosted for Andres Padilla (Twitter | @NodeStreamio) as he will be out for the next few Tuesday shows.  Our topic was a spooky topic for Halloween, technology fails!  We had some great stories talking about epic failures, how we recover, stay calm, and most importantly learn from failure.

Speaking of failure, I was disqualified! AGAIN! Neeraj Jhaveri (Twitter | @Neeraj_Jhaveri) & Josh Luedeman (Twitter | @JoshLuedeman) fought for the win.  Neeraj won the show!  Congratulations Neeraj!!  Neeraj will be the host and pick the topic for our show on Tuesday.

On our Thursday show we had 5 time Microsoft Data Platform MVP Matt Gordon (Twitter | @SQLatSpeed) on our Community Round Table.

We discussed Matt's adventures as a race car driver, his new book Pro Database Migration to Azure: Data Modernization for the Enterprise, and some of his favorite community content.

Here are the links that we covered:

•Taking Azure Arc and Kubernetes to the Edge!  by Jason Farmer

A big shout out with a lot of love to Hugo!

Another week is spread out before us, and it looks to be a really great one.  We hope that you have a wonderful week.  Don't forget our shows are live on Tuesday & Thursday this week at our Tales from the Field Youtube channel at 1 pm EST.

We hope to see you there.  As always Dear Reader, thank you for stopping by.