The IT Dev Connections conference was in San Francisco, CA this week. While I did not spend any time as a tourist, I did mingle with attendees and speakers. It was nice to sit with Grant, Andrew, Mindy, Kevin, Tim, Monica, Daniel and Meagan for dinner Monday night.

I attended a workshop on Friday about Azure. The speaker, John Savill did a great job the first half and helped me understand some fundamentals about Azure Infrastructure but the second half got me lost with IPs and Express Connections. Some of the pricing was interesting and I am going to try the Analysis Service in Azure soon.

Breakfast and Lunch was nice talking with attendees and speakers. I met Bruce with HP and even bumped into Ben DeBow in the lobby.

Tuesday I spoke on Self Service BI with Power BI. It was well attended (45-50 in a 60 seat room). Not many questions during the presentation and a few at the end. I shortened the talk to 1 hour (from 75 minutes) because it usually gets rushed at the end because of questions during the session. That did not happened, so it ended early but no one complain. Lunch was next on the schedule.

I did attend Victor’s session on Business Case for using SQL on Linux, Anthony’s session on Networking Internals for SQL Professionals (really good, lots info an he explains a lot really quickly with good demos) and Meagan’s talk on Azure Data Factory. Victor’s was good and Meagan explain a lot. The Data Factory is interesting but it looks v2 would be the time to start using, not v1.

The last session I did was Deploying with SSIS 2016. Not as many attendees (~20) but a couple were nodding their heads frequently and only one sleeper. The sleeper actually asked more questions at the end, so maybe his eyes were just closed the whole time.

IT Dev Connections was at a really nice hotel by Union Square in San Fran, but I heard some talk about it being expensive. That was really the only complaint. Food was great and logistics cool being in the hotel for the rooms and conference. Not a lot of walking but enough to get some exercise. 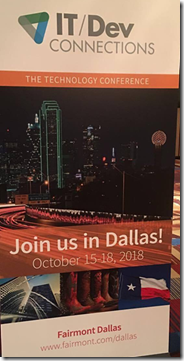 Looking forward to Dallas next year (Oct 15-18 maybe) – Rod Trent announced this on Monday night. He is really excited about IT Dev Connections and promotes well. It was nice to eat lunch with him and others on Monday and get scoop on the event.

Next week is the PASS Summit, so on to the next conference.