So it's here. Finally. For those of you who haven't had a chance to work with the beta, it's probably a good idea to download the evaluation version and

start.  This add-on should be widely adopted in a relatively short time. It doesn't matter if you're primarily a developer

or primarily a DBA -- there's a great deal to know in both arenas.

In this article we're going to discuss Reporting Services in general, its architecture and how it's installed. We'll be focusing more on *gotchas* and related information rather than duplicating BOL documentation. Later articles will discuss report design, reporting extensibility,

Unless you're living under the proverbial SQL Server rock, you've heard of SQL

Server Reporting Services.  You probably already know that it is an add-on

to SQL Server that allows you to create and distribute reports.  You may

not be aware of some of the more useful features:

Reporting Services (RS) is often described as a "free"

add-on to SQL Server. It isn't free. It follows the existing SQL Server licensing structure. If you're using CALs, you need a SQL Server CAL to use reporting services.

you'll need to have processor licensing.  If you want to deploy RS to a web-farm, you need SQL Server Enterprise edition licenses.

In a number of scenarios, effective use of the product will require additional

An additional cost could be Visual Studio 2003. The Report Designer provided by RS only works within VS 2003. Now you can design the reports by writing the XML-based report definition file manually.

"Ugh". You can also write your own designer.  I still say

"Ugh".  I would imagine that most reporting vendors will support Microsoft's report format in the near future. The exception

might be Crystal Reports; it doesn't appear that version 10 will have an export to Microsoft's format. This makes sense for

them since they have a competing report distribution product (Crystal Enterprise). I don't have Crystal 10

yet, so I can't say for certain. I also know of no existing utilities to convert Crystal to RS reports. I'm sure someone will do this, but there should be licensing considerations for Crystal.

Another thing to note is RS's role in business intelligence. At the moment, working with Analysis Services requires writing MDX

queries and provides only basic drill-down functionality. I attended an early partner-focused training session, and this was a particular point of disappointment

for many of the attendees. Their opinion was that business intelligence *is* multi-dimensional

analysis, so labeling RS as a business intelligence tool is misleading. I disagree. Any method of representing information that helps a company understand itself should be considered business intelligence. This includes static, relational database reporting. Not every data consumer needs to slice and dice.

Reporting Services is comprised of a number of

technologies and environments.  So what exactly does that entail? I see it as four major logical components:

is defined, and a report designer is made accessible through Visual Studio 2003.

A report processing and distribution system -- A Windows service manages

rendering reports, scheduling execution, and distributing via email or file

A webservice-based management and report viewing tool -- An ASP.NET application

I'm making a point of separating these components to stress that the entire RS package spans many areas of IT. In a production environment it would be crucial to involve not only developers, but DBAs, systems staff, network staff,

and email administrators. These four logical components are implemented by:

After writing out this list, it really struck me how complex the product is. There

Services, SQL Server, etc.  Given that complexity, it's amazing how easy the product is to work

with after you it is properly installed.

The basic workflow is as

then exposed by the ReportingServices webservice.

executed, the ReportServer service retrieves the necessary information from

the specified databases and creates an intermediate report.

intermediate report is stored either in the ReportServer or

ReportServerTempDB, depending on whether it is executed by means of a

subscription or on demand.

ReportServer service then renders a formatted report using the intermediate

definition, presenting it to the Report Manager application, sending it

contained in an email via SMTP, or writing it to a pre-defined file share.

Looking at the workflow diagram, the critical piece that I see are the number of

The installation process we'll be examining follows the developer edition. The evaluation edition available on Microsoft's website does have a few differences between the developer and enterprise editions, primarily in deployment.

There is also a command-line syntax for installing RS, as well as the ability to

create unattended install scripts.  For the purposes of this article, we

are going to focus solely on the installation wizard.

If you select all

of the components, the following items will be installed:

The installation has a number of *gotchas* that can be extremely frustrating. The single biggest piece of advice I can give is: read the documentation. I tend to be the kind of person that dives into a new product without studying all of the

accompanying documentation.  When the production

version was released, I wasted significant time troubleshooting installation issues that were clearly

identified in the readme. I'm not going to simply rehash all of the documented

prerequisites and issues, but rather focus on the major items:

Before you begin the installation, verify the following:

The actual installation process has some screens that are 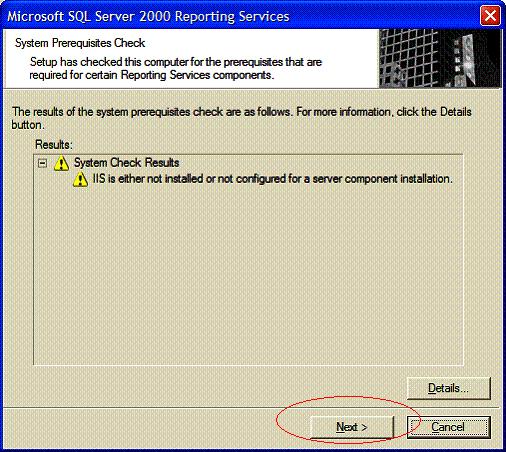 One of the first steps in the installation

process is to check to see if you have the necessary software requirements.  What

frustrates me with this screen is that *if* you're missing

a component, you can't easily go back to re-run the system check. No

"Back" button is supplied.  This is why I can't stress enough the

need to have everything needed in place before starting the install. 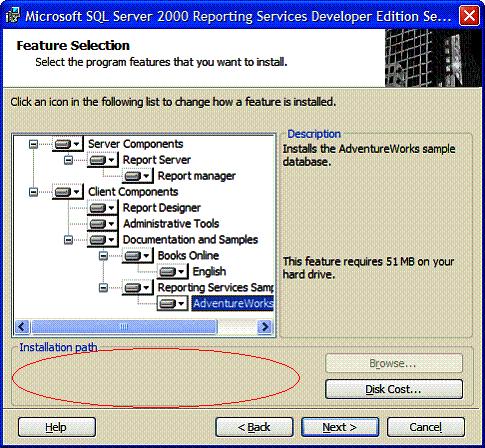 Another item that confused me briefly was the missing

directory location for some of the installation components.  After going

through the install, it was clear why there was no installation path

available;  the location of those items are determined later during the

install.  I still would like some sort of message here. 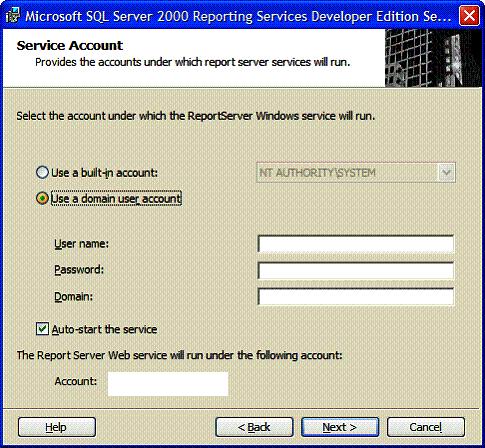 we're asked to setup the ReportServer Windows service.  It is installed

locally on the machine that runs the installation.  By default, it assumes

that you will provide a domain user account;  however, BOL recommends using

a built-in account.  If you aren't installing on Windows Server 2003, NT

default to running under the local ASPNET user account. 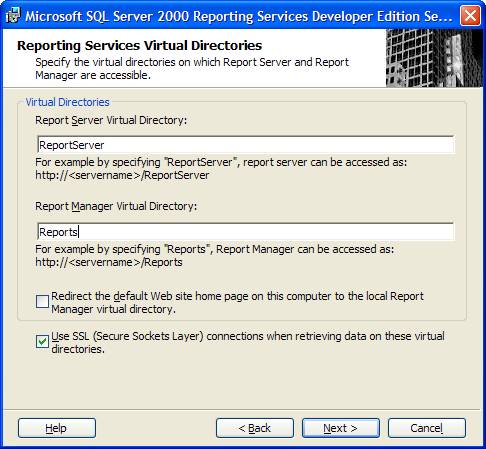 selecting virtual directories, it defaulted to these names during my

installation.  As I mentioned before, I had previously installed beta 2,

and uninstalling did not remove the existing virtual directories.  The

installation will not automatically overwrite or use these directories, so

you'll need to drop them from the IIS management tool.  Chances are you

aren't going to want to select the "Redirect the default Web site..."

option unless the IIS server is going to be dedicated to RS, and you want to

make it as easy as possible for your end-users to reach the Report Manager site. 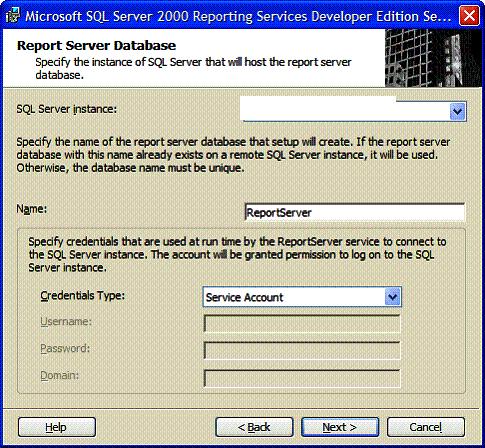 This screen asks for the location of the ReportServer

use to connect to that database.  Again, if the database already exists,

the install will *not* overwrite it on a local SQL Server

instance.  It does say that if the database is on a remote SQL Server, it

will be used. I have yet to verify this.  More info on distributed deployments

will be included in a later article.  In addition to the ReportServer

databases, the ReportServerTempDB database will be created. 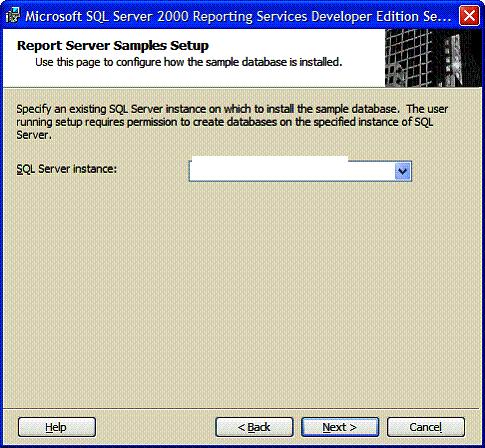 This screen is asking where to set up the *sample*

database.  In case you didn't already know, Microsoft is moving away from

Pubs and Northwind as sample databases.  The new database is called AdventureWorks

and will also be used in Yukon. 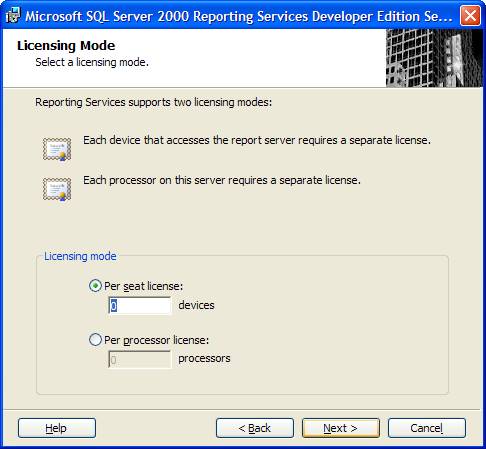 Remember, this licensing scheme should be exactly the same

as the licensing scheme for your existing SQL Servers.  Unless you have

less than 25 users, processor licensing is generally the most cost-effective and

manageable method; it allows for unlimited and anonymous connections to the

database (no need to count up CALs!).

So  my installation was nearly finished when I got this message.  I was

with administrator privileges while I was installing.  There was no way that

I didn't have privileges to start the service.  The wonderful thing is when

you hit Cancel, it roles back the entire installation!  Well, that isn't

quite true.  It didn't drop the SQL databases, or remove the IIS virtual

directory;  they needed to be cleaned out by hand.

source of my problem.  I received the same results after applying it.  And again, the

installation was rolled back.  After numerous attempts, a serious amount of

caffeine, and a few obscenities, I discovered that the original beta 2 Reporting

Services application files were still there, even though I uninstalled the beta

before attempting the production install.  After deleting those, the

installation completed without a hitch.

Now you're ready to explore Reporting Services. It's finally here, and it's definitely here to stay. It doesn't matter how you work with SQL Server; you need to get to know it -- well. Stay tuned for Reporting Services Part II: Report Design.