Connect to MySQL Through SSH Using the CData MySQL Driver

There are two major options for securely exposing access to your MySQL database over an unsecured network: an SSL connection or an SSH tunnel. The CData MySQL Driver provides a secure, live data connection to MySQL data from popular BI & Analytics, data warehousing, and application development tools, supporting both SSL connections and SSH tunneling. In this article, we explore how to use the CData MySQL Driver with SSH tunneling, which is often easier to build and more secure than SSL due to the driver’s built-in support for tunneling.

In addition to supporting encryption through SSH security protocols, which provide a strong record against attacks, MySQL can be configured to only accept traffic from 'localhost,' blocking all connections except for the configured tunnel.

An SSH tunnel requires the SSH server to run in the same environment as the MySQL instance, but setting up a tunnel is simple once the server is up and running. SSH employs robust encryption and, via the tunnel, makes client connections appear to come from the SSH server, rather than from a remote client. You don't have to configure your MySQL server to allow remote connections when using an SSH tunnel so your MySQL instance is safe.

Each CData MySQL connector has connection properties that allow you to connect to a MySQL instance through an SSH server. To connect, you will need to set Use SSH to "true" and set the following properties:

An example of a configured SSH client in the CData ODBC Driver is shown below; the connection can be configured in any CData connector. 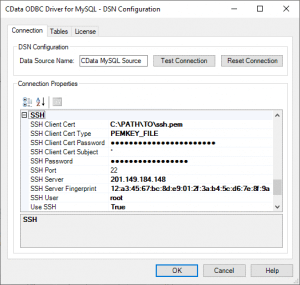 Depending on the connector, you may need to configure a connection string similar to the following:

Because the SSH client is built directly into the connectors, the setup and usage is exactly the same, regardless of the operating system. Set the connection properties and start working with remote MySQL data from your local system, all through a secure SSH tunnel.

The built-in SSH client in the CData Connectors for MySQL allows you to simply connect to a MySQL instance through an SSH tunnel. CData provides standards-based MySQL connectors for ODBC, JDBC, ADO.NET, Python, and other technologies. In addition, CData offers drivers with the same built-in SSH tunneling capabilities to access every major database. You can get free 30-day evaluations of all drivers on the CData site.

Infragistics Reveal is a data visualization solution that simplifies the way you add embedded analytics and visualizations to your apps. Reveal supports connecting to OData APIs, but many enterprise APIs are not built using the OData standard. By combining Reveal with CData solutions, you can instantly build dynamic dashboards from live enterprise data sources like Salesforce. […]

RESTful APIs offer a straightforward way for businesses to work with external data and offer access to their own data. With more than 24,000 public APIs providing access to limitless data and the typical enterprise leveraging more than 200 applications, teams and developers need more efficient ways to query API data. With the CData API […]

A Comparison of Database Drivers for MySQL

MySQL is "The world's most popular open source database" and it is widely-used to store and access your data. In fact, there are many cloud and on-premise databases (like MemSQL and Google Cloud SQL) that use the MySQL interface. Several native, open-source drivers are available for connecting to your MySQL data from other applications. In […]

APIs require up-to-date and strong documentation, increased security levels, comprehensive testing, routine versioning, and high-reliability to be appropriately utilized. With the CData SSIS Data Flow components you can import and export data from various data sources. However, in some cases the type of operation you need does not fit the SSIS Source or the SSIS Destination model. The […]

Connect to SAP HANA Data as a Linked Server

The SQL Gateway enables you to configure a TDS (SQL Server) remoting service and set up a linked server for SAP HANA data.  After you have started the service, you can use the UI in SQL Server Management Studio or call stored procedures to create the linked server. You can then work with SAP HANA data just […]