I was recently asked to find a way of comparing our live and failover reporting servers to make sure that both matched.  After a bit of research, it seemed that most users recommended Red Gate software for this task; further research lead me to their SQL Automation Pack.  The SQL Automation Pack can run a suite of Red Gate products from the command line, one of these products being SQL Compare. SQL Compare allows you to compare database schemas and perform various tasks according to the results.  I’m not going to into too much detail about the various functions of SQL Compare as that’s beyond the scope of this article.

One of things I had been asked to do was have the results of the comparison emailed out to the members of the team.  As before, I started researching, but this time it became apparent that putting the two tasks together wasn’t as straightforward as it seemed it should be.  There were many pages of scripts to run SQL Automation and many more about the difficulties of sending email from the command line.  Nowhere though, was there one page that brought the two together.  I spent a good while exploring various avenues involving Batch Files, Windows Event Viewer, Windows Task Scheduler and PowerShell before hitting on the solution below.  As with many things the final method was surprisingly simple so I decided to write this to (hopefully) save others the time that I spent.

The method I used in the end makes use of an SQL Server Agent Job to run a PowerShell script then uses dbmail to email out the results.  There are likely to be other ways of achieving the same outcome but this, to me, seemed the most simple.

The first step is to write the PowerShell script that compares the two databases.  SQL Compare is a very flexible tool for schema comparison and there are many options available.  The script I have included here is pretty much the most basic you can write but it may be all that is required.  However, as I said previously, showing exactly what can be done with SQL Compare is not what this article is about.  Although you can write directly into your SQL Agent job, in my opinion, it will be easier to create it in PowerShell then copy and paste it across.

This script gives the two servers to be compared (/s1: and /s2:), the databases to be compared (/db1: and /db2:) and creates a report for the output of the comparison (/r:).  The /rt switch sets the report type, in this case to Excel.  The /f switch at the end tells SQL Compare to overwrite the output file if necessary.  If that switch is not included the script will fail if the file already exists. 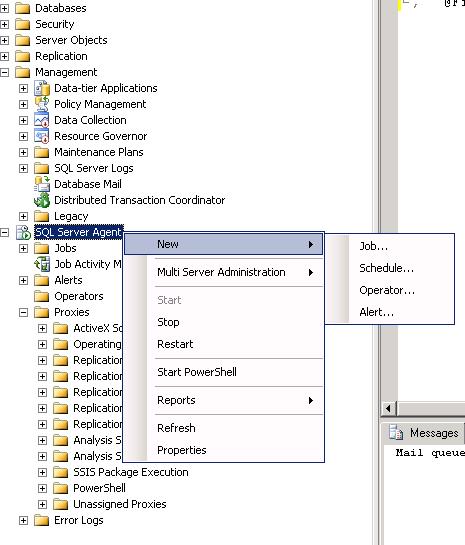 Secondly, you can right click on the Jobs node and select New Job. 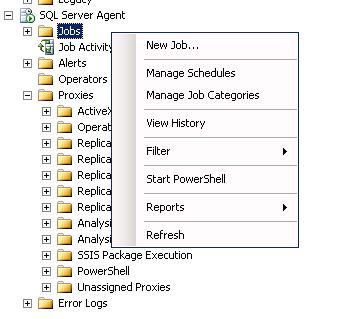 Figure 2: An Alternative Way to Create a New Job

Both options will open this screen. 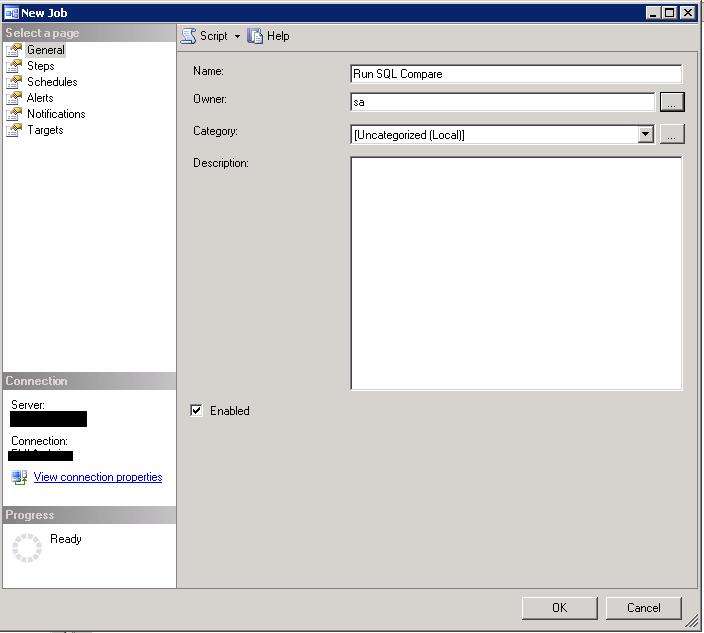 Give the job a name that will explain what it does and, if you wish, enter a more detailed description in the box.  After that, make sure the job owner is sa.  Next, click the Steps option followed by ‘New…’ This will open the screen shown in Figure 4. 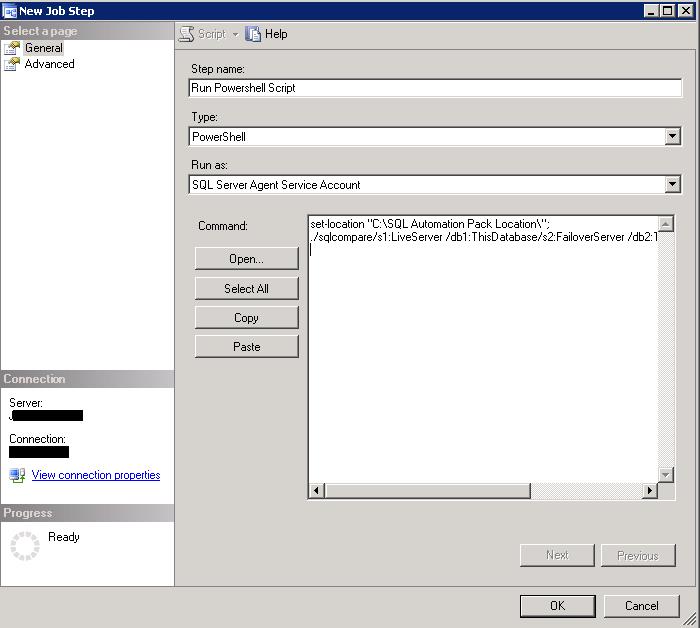 Give the step a name and set the Type to PowerShell.  At this point the ‘Run As:’ dropdown will automatically change to ‘SQL Server Agent Service Account’.  After this, enter your PowerShell script into the Command Box.  Click OK to return to the Job Properties screen then click ‘New…’

As before give the step a descriptive name but this time set the type to ‘Transact-SQL Script (T-SQL)’. Then, in the Command Box, enter the script to send the email using dbmail.  As before the example I’ve provided is almost as simple as it gets but it is enough to do the job.

When entering multiple email addresses separate them using semicolon but enclose all of them in single quotes i.e. ‘EmailOne; EmailTwo’.

The next step is to add some error-handling.  It’s all very well receiving the email every day to say things are fine but just as importantly, you need to know when they’re not.  As before, create and name a T-SQL step with the email script in the Command Box but this time change @Body to show your error message.  Before exiting this step, click the Advanced node on the left-hand side of the screen.  That will take you to Figure 5. 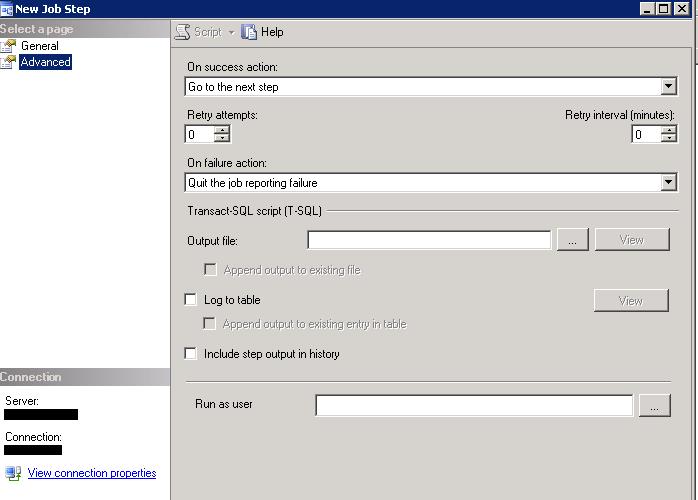 Set the ‘On success action:’ dropdown to ‘Quit the job reporting failure’.  Remember you want this to run when the job hasn’t worked.  Leave the ‘On failure action:’ dropdown as it is.  Click OK to return to the job properties screen.

Finally you need to schedule the job to run.  From the job Properties screen click the Schedules node and the click ‘New…’, this will take you to the screen below (Figure 6). 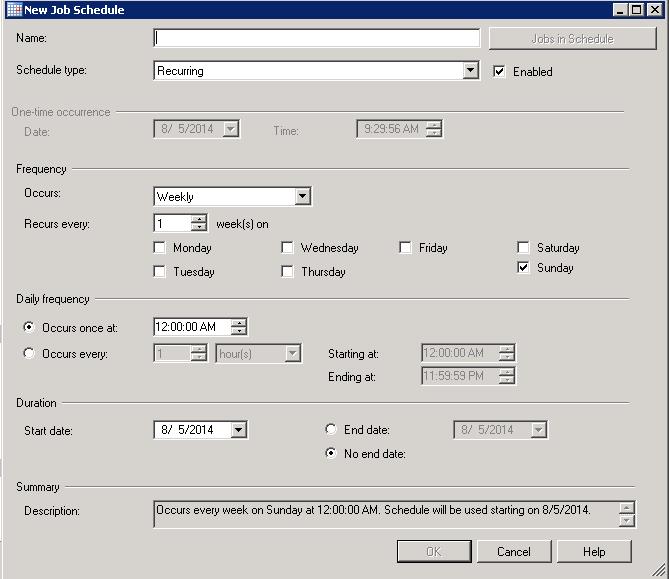 Give the schedule a name and then set it as you wish.  I tend to run SQL Compare once a day overnight to pick up any changes made during the day.

SQL Monitor’s Job duration unusual alert is a powerful tool for keeping track of most jobs in your SQL Server environment. It works by comparing the running time of any job instance against the median for that job, and identifying when a variation in the job duration could hint at a performance problem. However, if your environment contains big jobs whose durations vary by several orders of magnitudes, it can be tricky to specify what kind of variation is expected and what would be unusual. For these cases, it is possible to go beyond the functionality of the built-in alert with a custom metric.

With contributions from MVPs and the SQL Server community, the SQL Monitor team at Red Gate has put together a custom metrics site, SQL Monitor Metrics, to accompany the release of SQL Monitor 3.2. The site hosts T-SQL scripts which can be imported directly to SQL Monitor for custom metric monitoring.

We'd like to better understand the kinds of database related development tasks that you perform, so that we can ensure our tools are helping you to be more productive.

Webinar: Whatever your source control system - seamlessly link it to SQL Server

In this webinar consisting of 30 minutes of software demonstrations followed by Q&A, you will learn how to link your database to your existing source control system within SQL Server Management Studio using Red Gate’s SQL Source Control.

We will also give you an exclusive preview of forthcoming custom scripts features in the next version of SQL Source Control and SQL Compare.

Find out where you can meet the Red Gate team in the US, ask a question, get a custom demo, and maybe a prize as well.