The purpose of this article is to review the rsNeatPublish (www.rsneatpublish.com) toolset, which allows automated bulk publishing of SSRS 2008R2/12/14/16 objects to SSRS instances (native and SharePoint Integrated). The review will assess the software based on functionality offering, the user experience, help/support available, and pricing.

Automating deployment of SSRS 2008R2 (and beyond) reports, and related artefacts, have been a little ignored when it comes to an out of the box “hands-off” solution.  Typically the options are:

The problem with the third option is that the examples don’t seem to cover all deployment scenarios needed.  For example, deploying to native/SharePoint-Integrated, subscriptions (standard and data driven), shared VS embedded data sources, and multi-valued parameters all need to be accommodated.  Also, the examples aren’t general enough and hence often have limitations.  The limitations include detection of the link requiring prior knowledge of the objects being linked, problematic linking of objects because of reference Vs name confusion, many to many relationships, etc.

As well, ideally we could record all settings in a convenient location (i.e. within source control, so we have a history of changes and can track against a task ID).  A comprehensive settings file would allow an easily repeatable (in total) upload process to create/refresh/migrate a CI (continuous integration), Staging, or Live environment.  And, it is one thing to have a repeatable process for reports, data sources, and data sets, but it is another to include all SSRS artefacts, such as the schedule of a subscription, the report a subscription is for, a linked report, etc. within the automated deployment scope

There are two basic user scenarios: 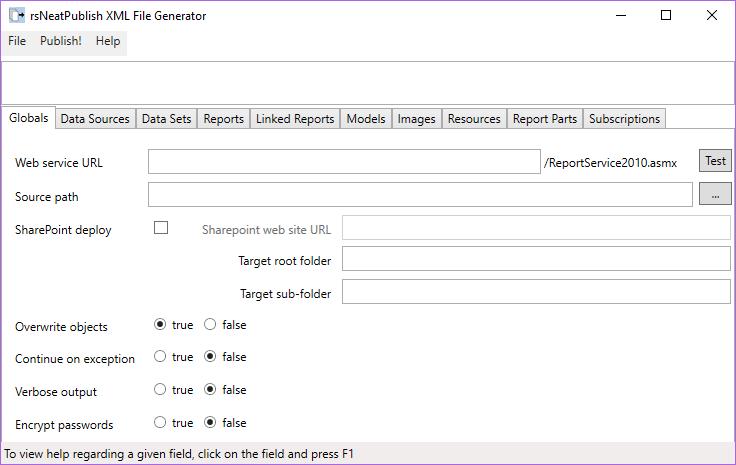 The initial screen (Globals tab) prompts for source and target related settings and focuses on high level configuration (SSRS webservice, source/target location, etc) and behaviours.  The remaining tabs collect the SSRS object source/targets (data sources, data sets, reports, subscriptions, etc).  Most of these settings can be populated via importing of the Visual-Studio/BIDS SSRS project file as shown in the rsNeatPublish automated input demo (which involves confirming the project file settings are correct and importing the SSRS project file (.rptproj) via File | Import).  If the SSRS project file is not available, no problem, settings can be entered manually as in the demo here.

Once all of the SSRS configuration is in place, the deployment can be tested via the rsNeatPublish.XmlGenerator interface’s Publish! | Save and Publish to Server (see Figure 4 below) 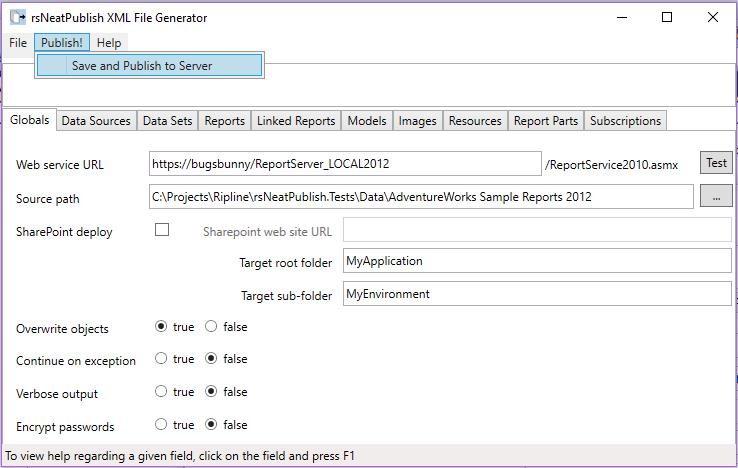 Figure 4 - rsNeatPublish.XmlGenerator UI - Save and Publish to Server

When satisfied all desired SSRS objects are deploying as expected, the data captured by rsNeatPublish.XmlGenerator can be saved to a file (File | Save), for editing (File | Open) at a later time.  The file (stored in XML) holds all the configuration information required and can be stored in source control for retrieval at your convenience.

Licensing is based on a CAL basis.  The model is against the source machine/device that requires rsNeatPublish (the console deployment application) installed.  That is, a machine that has rsNeatPublish installed, can deploy objects to any reachable SSRS instance.

So given a team that may have 1-2 SSRS developers, a build & deploy server (which may be shared among other teams), the licencing for a given team ranges for say 1-3 CALS.

Note that rsNeatPubish.XmlGenerator (client UI application) is available for free with at least one paid license of rsNeatPublish (console deployment application).

Because the licensing model is based on the source machine, the price-point is quite reasonable given the scope of the functionality on offer.

Ratings below are a mark out of 5