Disk and CPU related performance counters and DMV information can be difficult to interpret and compare when activity levels differ massively. This Cellular Automation (CA) application places a precise workload that can be repeated, measured and observed. It includes various ‘Pattern Generators’, one that uses Geometry and places a CPU load, another that uses set based queries that are IO bound and another ‘Hekaton’ version that uses in-memory tables and stored procedures. All 3 are mathematically provable implementations of ‘Conway’s Game of Life’, and an effective way to benchmark and compare the relative performance of different SQL Servers.

Step 1 – Initialization – An ‘Initialize’ procedure clears down any historic patterns associated with the calling session then populates a ‘Merkle’ table with the coordinates for an initial set of new patterns. Differing initial pattern complexity levels can be set using a ‘Stress Level’ parameter:

Step 2 -Stress Testing – The ‘Pattern Generator’ procedures create the number of new patterns specified in a parameter, they use different techniques that stress different areas of a SQL instance. The Merkle table holds all patterns generated for a specific session, multiple calls can be made to the pattern generators from different sessions, each session maintains its own state.

Step 3 – Results Verification – The ‘Display Pattern’ procedure shows the highest generation of patterns for the current session. The geometry data type is used to visualize the patterns, to confirm the final pattern and check for successful completion.

There's no learning curve involved in using this application and no client tools to install on your network, simply run one of the T-SQL setup scripts then execute a test, concurrently in multiple query analyser sessions if necessary. Change the 'Test' variable at the top to indicate the scenario being run, it's used later for comparing results.

The CPU, IO and in-memory performance of the 2 servers below are compared in this example. Both are SQL Server 2014 instances with SP1, maximum memory set to 8 GB and default parallelism. Background activity was minimized by stopping other SQL instances and all SQL Agent services.

Between each test, the CA setup script was rerun to drop and recreate the database. The ‘Duration’ is the total time (microseconds) taken by the different pattern generators to produce 100 new patterns, lower represents faster processing times. The T-SQL script below was executed after the CA 2014 setup script to simulate a load.

The resulting graphs below show a comparison between the Virtual and the physical server processing time for this same precise, exactly the same workload. Overall and by workload type. The physical Server is faster at processing CPU, IO and Hekaton workload types. 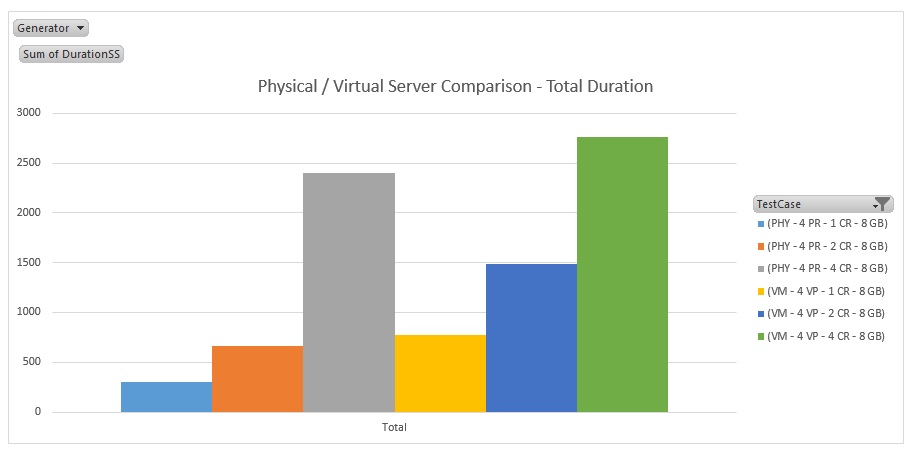 Microsoft released a whitepaper recently titled ‘In-Memory OLTP – Common Workload Patterns and Migration Considerations’. In it they show how Hekaton performance varies in comparison with traditional SQL Server tables and procedures, and the workload patterns that suit in-memory OLTP. While not disputing the Microsoft whitepaper, it doesn’t include code samples to support the points made, this article does.

This test workload pattern shows that Increasing index sizes and logical reads have a negative impact on Hekaton performance, but conversely the more procedure calls a second the better it performs in comparison with traditional SQL. It uses a Cellular Automation (CA) mathematical database application to place similar demands in Hekaton and a corresponding set of native SQL Server tables and stored procedures.

The test was performed in a single query analyser session so the Hekaton concurrency improvements aren’t considered, the CA application does support multiple concurrent sessions but they weren’t used. Even just the benefit of not having to compile and interpret queries makes a massive difference, 75 times faster in this reproducible test.

The simulation script varies the workload type as the test progresses, initially favouring OLTP but transitioning gradually to more of an OLAP bias. The ‘OLTP / OLAP Simulator’ script initially makes 512 procedure calls each requesting the generation of 1 new pattern (OLTP Bias), this slides across the OLTP / OLAP spectrum until finally 1 procedure call is made requesting the generation of 512 new patterns (OLAP Bias). The Pie Charts show how long each set of procedures took to complete the requests at different Stress Levels, notice Hekaton performance falling away relative to the native SQL ‘IO’ procedure as the cost of each call increases and the frequency of the calls decreases. 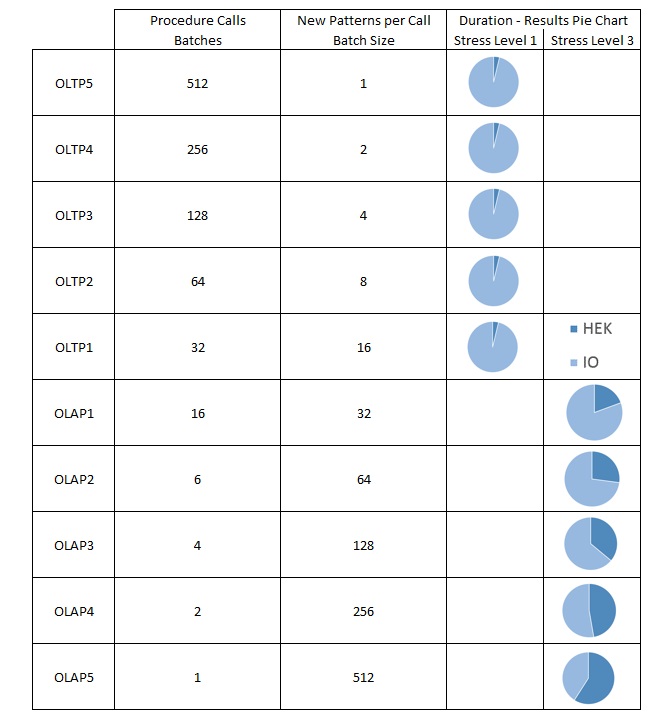 The difference in total execution times between Hekaton and SQL Server stored procedures and queries varies according to the batches called and the cost per batch. When the batch costs are low and frequent (XLTP below) then there are significant gains in using Hekaton, but as cost increases and frequency decreases (OLAP below) then the gains are gradually lost. 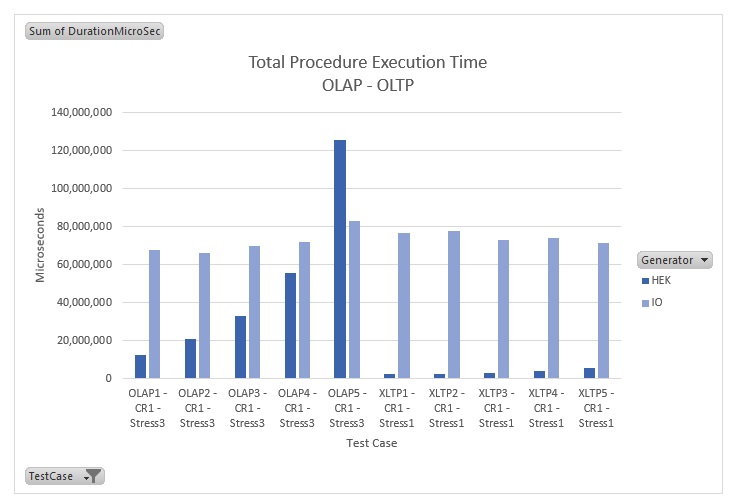 The OLTP / OLAP bias is heavily influenced by the ‘Stress Level’ parameter in the simulation test script which can be assigned a value of either 1, 2 or 3. The Cellular Automation application generates new patterns based on applying ‘cell comes alive’ / ‘cell dies’ rules to an initial starting pattern. The more complex the starting pattern, the more intensive the subsequent workload.

The initial state includes one simple, 3 Merkle Pattern that oscillates between 2 states, there is very little work involved in constructing the next new pattern.

When a procedure is called hundreds of times a second the savings from not having to compile or interpret T-SQL queries can be significant. The graph below shows the total duration of procedures calls for the SQL Server and Hekaton pattern generator stored procedures. Both performed exactly the same work (batch requests and batch size) using very similar queries and indexes, the results in the graph are filtered as below: 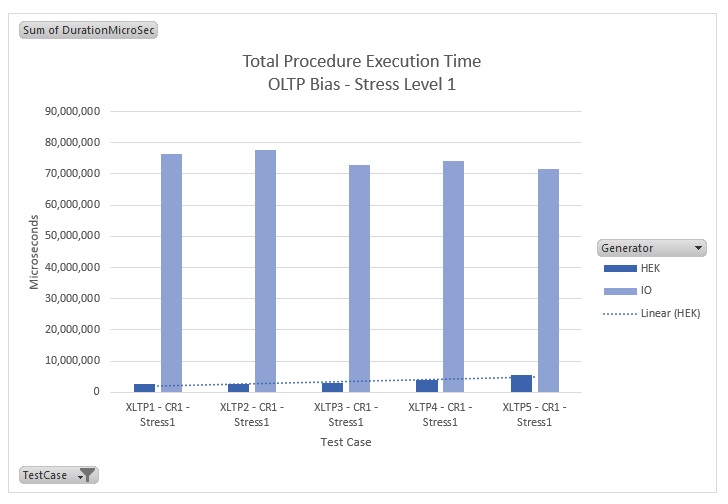 Performance deteriorates in Hekaton as the size of the indexes, and logical reads, increases. The graph below shows the total duration of procedures calls for the SQL Server and Hekaton pattern generator stored procedures. Both performed exactly the same work (batch requests and batch size) using very similar queries and indexes, the results in the graph are filtered as below: 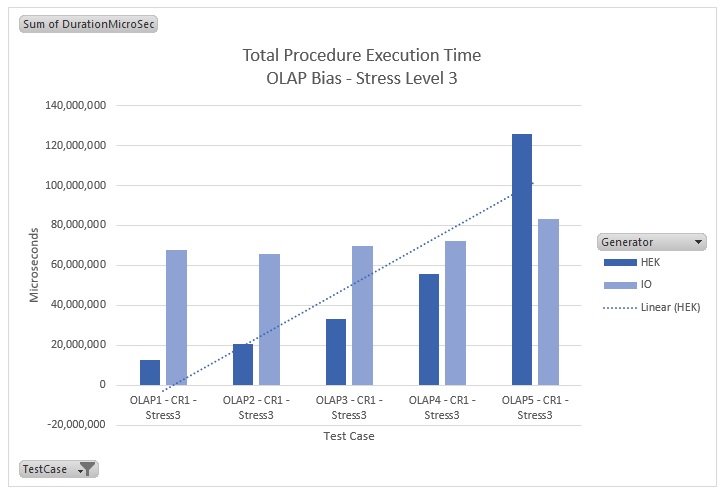 The Ugly – System Out of Memory

Request 1,000 new Hekaton Stress Level 3 patterns in 4 concurrent sessions and the error message below is typically shown after about 80 seconds. The only recovery I have found is to restart the SQL Service and the Hekaton database is in a recovery state for sometime after the instance comes back online. Data lose is typical although I haven’t researched it, an alternative table schema definition in the setup script might resolve this problem. 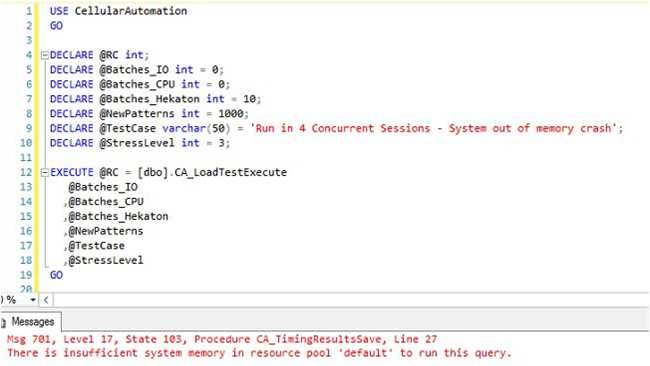 This heading describes a simple framework for measuring SQL Server database application performance from both CPU & IO perspectives. A ‘Synthetic Transaction’ is proposed that is :

The ‘cellular automation’ application generates new patterns according to a precise set of mathematical rules. It records the start and end time of each call which is a reflection on how SQL Server is handling client requests.

Run the ‘CA Setup 2008’ script to create the cellular automation database application, then schedule a SQL Agent job for the steps below.

A call is made to the Cellular Automation engine requesting the generation of 200 ‘New Patterns’ at ‘Stress Level’ = 1. This calls the geometry intersects method which requires CPU, it runs for between 5 and 10 seconds’

A call is made to the Cellular Automation engine requesting the generation of 100 ‘New Patterns’ at ‘Stress Level’ = 3. This calls set based queries which are IO bound, it runs for between 5 and 10 seconds’

A SQL Agent job to run both the CPU and IO check steps once every 10 minutes, an example of the T-SQL used for the job step is below:

The results below are from 2 Hyper-V virtual servers and a physical server described in the appendix. There was no concurrent client activity in any of the databases while these baselines were captured.

The ‘Total Duration’ of calls to the SQL IO pattern generator shows a consistency and level of performance on the physical server that is not shared by either of the virtual servers. 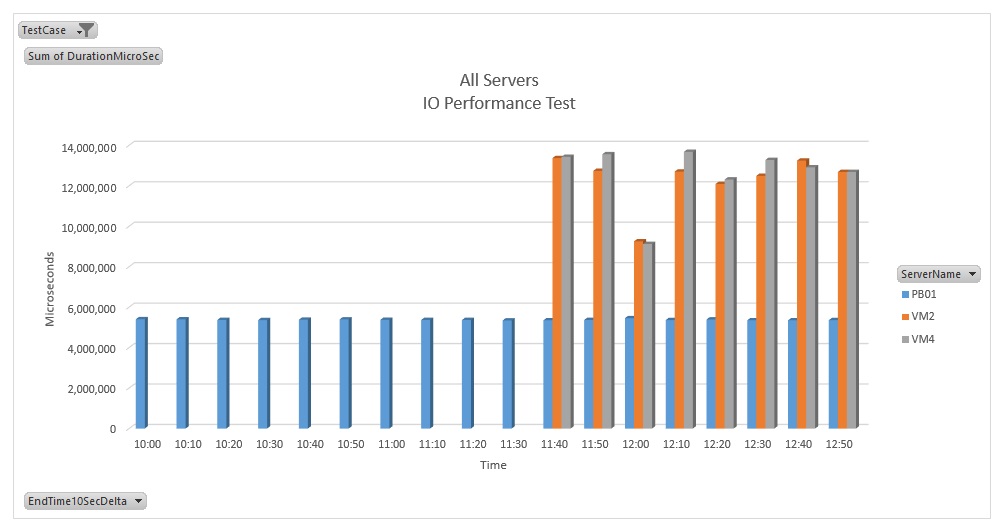 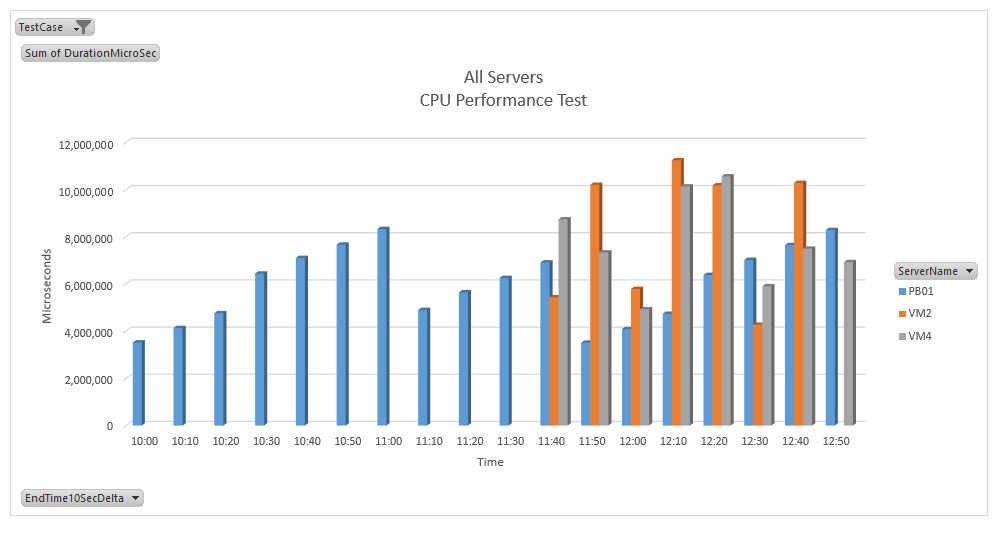 The ‘Total Duration’ of calls to the CPU pattern generator show a clear trend on the physical server. Cross referencing the trend below against a baseline set of Windows Server and SQL Server performance counters would identify the cause, some sort of cache flushing looks likely. 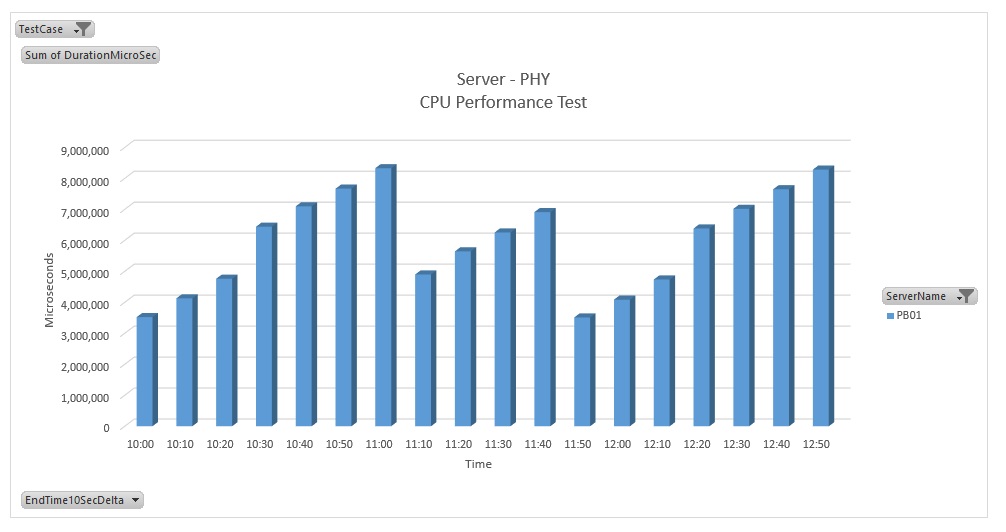 These example results were from a simple environment consisting of 3 SQL Server 2014 SP1 instances:

The VM’s 2 and 4 are configured differently in Hyper-V, VM4 is using best practise settings for the following:

At such low levels of client activity, there were no discernable differences in performance between the 2 virtual servers.

All of the pattern generators in this application will stress a SQL instance and are designed for isolated testing environments, you use them at your own risk.

After running the CA Setup script, execute the ‘Initialize Patterns’ and ‘Display Patterns’ stored procedures to create and show Merkles in their initial state. Click on the ‘Spatial Results’ tab in SQL Server Management Studio to view as shown below. 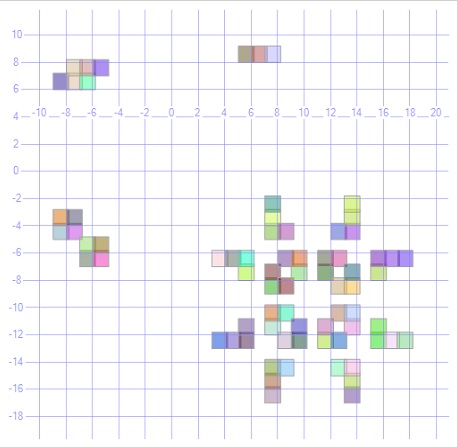 Now run the Pattern Generator stored procedure requesting the generation of 5 new patterns as below, each iteration is the result from applying Conway’s rules to the previous pattern. After 5 iterations the patterns differ to those at the start immediately after initialization, the oscillation cycle results in new patterns matching the initial pattern every 6th iteration. 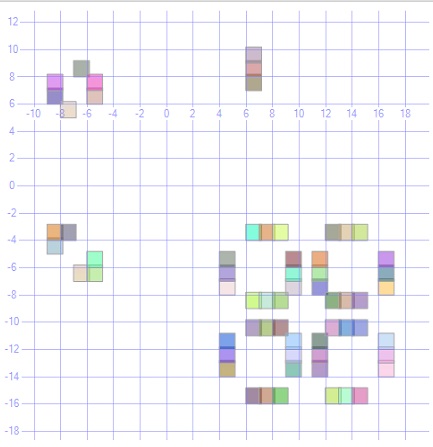 The patterns cycle through their phases and match the initial pattern again every 6th iteration as illustrated below. Run the ‘Generate Pattern’ stored procedure 1 more time to complete the 6th cycle.

This is the proof that this application meets all of Conway’s mathematical rules.

In this application, Merkles are entities who’s existence at each iteration is as x and y axis coordinates, a ‘Merkle’ is a cell and a set together form a pattern.

With the ‘CPU’ intensive pattern generator, these are converted to geometric polygons, cell sizes are increased by 20% and the geometric ‘Intersect’ method is used to count adjacent Merkles. This is illustrated in the ‘Toad’ pattern shown below in its base state/starting pattern. 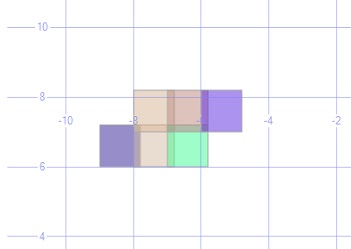 When the rules below are applied to the pattern above:

The pattern below is generated on the 1st iteration, it returns to it’s base state/starting pattern on the next iteration, this pattern oscillates between 2 states. 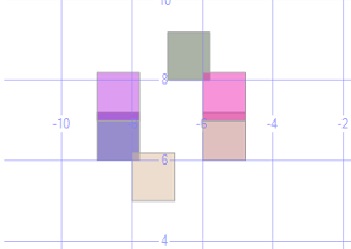 The screenshot below shows the initial patterns created at Stress Level 3.

After 100 iterations, 6 new glider patterns have been created as shown below, 2 new gliders are created every 30th iteration which increases the CPU, IO and memory cost with each iteration.