The Hockey Team to Represent a Truly Bilingual City: Let’s Give Cunneyworth The Proper Chance He Deserves to Lead the Canadiens to a Stanley Cup Someday as Al McNeil Did in 1971

The Media in Quebec has opened up 2012 with a continuation of what it wishes to disseminate, or more probably, employs to sell more papers easily, regarding a minority within the minority –  the unilingual Anglophone: representing less than twenty percent of a one million strong community that the Fraser Institute has stated, as well as the two-year study from the  Senate Committee under Chaput-Champagne, has shown is vastly underfunded, or should we say outright starved. One could get the impression that the Christian spirit of tolerance has left us utterly, as pointed out by our late Honourable Guy Favreau, or perhaps a refusal to accept the fact that the province, and especially our city, represent those from a very diverse background. Our provincial ethno-Nationalists are blinded or refuse to accept anything less than homogeneity to the ‘dominant culture’ – branded as Interculturalism. This political faction, with varying degree, do not seem to have as much influence as they think, as André Pratte indicated to us in La Presse the other week, when he pointed out how small the group of foaming at the mouth Anglophobes and militant sovereigntists were, versus over twenty thousand fans watching the game at the Bell Centre. Quebec has turned the page on the Bloc Québécois and their politics, and it seems most have also, except for street protesters and hardliners within the Quebec Government.
Aislin's latest, of the Montreal Gazette, in this ironic cartoon says it all: 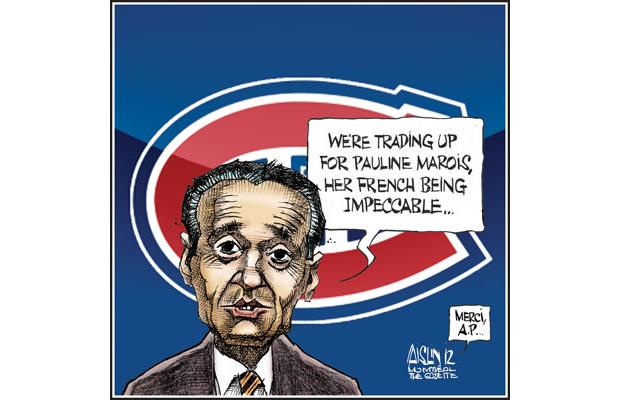 The reverent Yvan 'road-runner' Cournoyer has weighed in via comments to La Presse furthermore, stating that politics and hockey make an irrational mix, however our Kultuurkamph Cultural Minister, Christine 'pas de police de la langue, but it is okay to bully kids' St-Pierre, with her instance that the Montreal team be only an ethno-nationalist institution, continues to act as if we are living one hundred years ago, when the Canadiens were created by an English speaking Montrealer for the benefit of the French speaking provincial majority. The Canadiens were as important to Hockey as Desjardins was to Banking, with respect to the obvious prevention of advancement and disadvantaged linguistic majority. It gave francophones a real chance to show their worth and reach the heights Maurice 'the Rocket' Richard et al. had never been given a chance to prior to the platform of the Montreal Canadiens.

It shows poor judgement, or perhaps indicates a sense of entitlement, in the era of globalisation to prevent the advancement of Cunneyworth with such protest (yes, the shoe is indeed on the other foot now, you are right Dad) – since we are in an age where the minorities in the province have very restricted access to secure government jobs, whereas at the same time the constant Media criticism in Montreal and Quebec press in general, is so self-destructive it has turned off likes of Guy LaFleur, Patrice Brisebois, Luc Robitaille, Patrick Roy, and Pierre Turgeon – those even of the provincial ethnic majority.

Abdul Butt’s totally viral youtube video filmed on the spot of the protests of the Jan 7th game versus Tampa Bay, has hit over eighty three thousand views now because Quebeckers are very good a laughing at themselves as long as the comedy is respectful, and it seems that Adbul’s bilingualism has been very well received, as he tries to tackle a serious sociological problem – or is it just a perception of a problem by the language zealots that follow Mario Beaulieu of the Societe Saint-Jean Baptiste.

Many have aspirations for a new political order in our province, one that puts linguistic and ethnic divisions in the past, and fall in line with the more common left-centre-right political backdrop.  It is encouraging to see how a brave Geoff Molson has stood his ground regarding his decision with respect to Cunneyworth, an interim coach after all – neither Members of Parliament Maxime Bernier, nor Larry Smith gave into the ‘la brimade (angry mob)’ after their comments against coercive legislation that has legitimised discrimination based on language. Courage in the face of such unpopular, but necessary decisions, deserves merit. That is Leadership, not Losership 🙂

Thanks again, Aislin for summarising Anglophobia so well in Quebec: 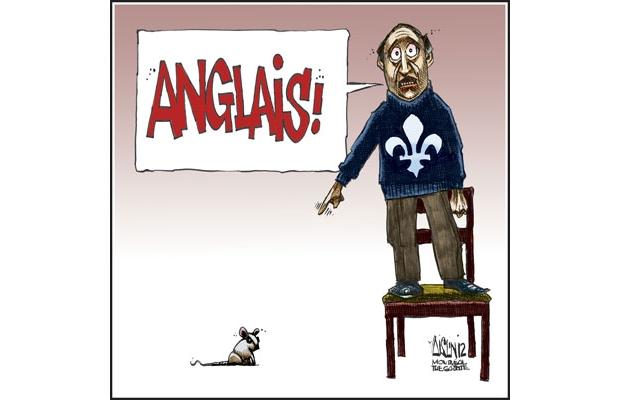