SSIS #118–Is it an OLEDB or an SMO Server Connection?

OLEDB is the native client for SQL Server. Every SSIS developer is familiar with how to use it. Almost every task in Integration Services can use an OLEDB connection. As a matter of fact, it’s a preferable client to use if your backend is SQL Server.

However, there is one exception, that is the Transfer SQL Server Objects Task. This task uses an SMO Server connection only. 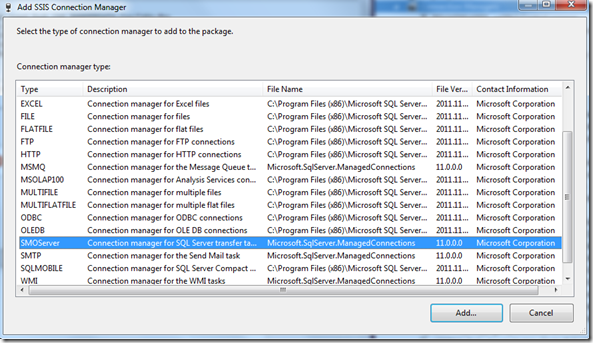 If you don’t know this before you use this transfer object task, there can be confusions during development and also during deployment.

Here are my lessons learned.

A good practice is to name the SMO Server connection properly. I used such names as:

In SSIS 2012, you have three difference places to create connections.

The best practice is to create connections at the project level.

In 2008 , during deployment, I’ve seen DBAs done the following:

Neither of the above practices is good. If you as a developer have done if properly, DBA’s will not need to mess too much with the connections:

In 2012, deployment is much more straightforward because

Quote from the MSDN article:

You can configure an SMO connection manager in the following ways:

Besides, the data flow object, the Transfer SQL Server Objects task is another task you can use to transfer not just data but also other types of objects between instances of SQL Server. For more info, check out this MSDN article.