What about in MDX, how do we detect zero and NULL? What does even NULL mean? Since we are leaving the one dimensional SQL world, and are stepping into the multi-dimensional cube, NULL has a slightly different meaning. To me, it really means an empty cell. When the Internet Sales is showing as (null) for 11/11/2014, it means that the cell of {[Internet Sales], [11/11/2014]} is an empty cell. If you query the fact table, SELECT Internet Sales FROM factSales WHERE Date = 11/11/2014, it should return no rows back.

Detecting zero and NULL in MDX

How do we detect when Internet Sales is zero or when the cell is totally empty in MDX?

I wrote the following demo MDX code to see the various ways and the results.

I first created two values, a zero value and a NULL value. 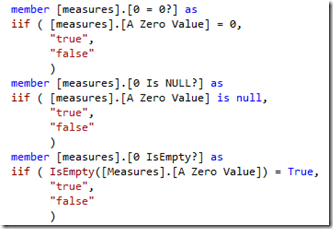 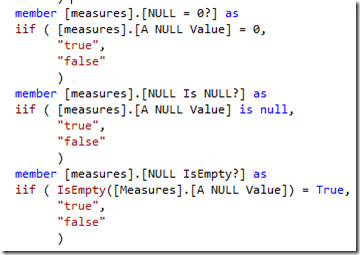 Then I wrote the following MDX query. 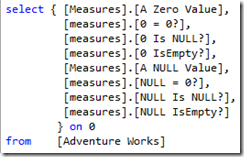 Here is the result.

Zero is zero, AND NULL is also zero

Do the four results in red surprise you?

It did surprise me. I don’t have much explanation why MDX thinks NULL is zero. At this point, I am just taking in this fact.

Here is the code in text.

member [measures].[NULL Is NULL?] as

Empty cells, natural or user-defined can be a powerful way to optimize our MDX queries

Then you might think that since MDX thinks NULL is zero, then why many people set certain side of a MDX calculation to be NULL. Why cannot we all use zero, not mess with the NULL? Well, empty cells, natural or user-defined can be a powerful way to optimize our MDX queries, with the help of either the NONEMPTY() function or the Non EMPTY keyword that works only axes. Check out our book MDX with SSAS 2012 Cookbook on this topic.