I was trying to create a Named set in SSAS 2008 using the MDX calculations. I wanted to include all of the members of a hierarchy except one of them. I started with trying to use the filter expression and this worked but was very cumbersome to get the syntax right. I finally switched over to the MDX function “Except”.

To create a Named Set in Analysis Services Click on the Calculation tab and then the Named Set button across the top.

The Code in the Named Set was:

Here is an image of the Hierarchy. The arrow points to the member I want to remove from the Named Set. 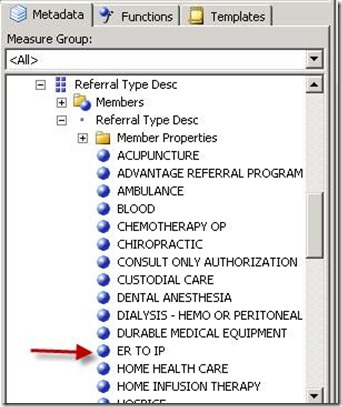 To Test it I dragged over the hierarchy into the cube browser and dragged the named set up top. You can see the ER to IP member is missing. 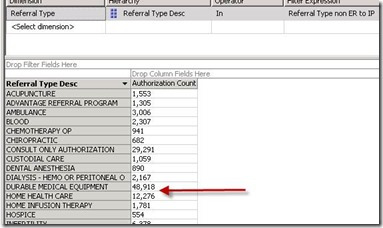 Per Member Per Month Per 1000 Calculations in MDX

In a lot of industries there is a popular calculation called “Per Member Per Month Per 1000” calculation or the...

I’ve blogged about the Properties()  function before.
MDX #11 – How to get number of cars each customer owned using Properties() function?
MDX...

I used to think naively that IIF is an innocent little function that can only do good and help me...

Retrieving a hierarchy with recursive relationships can be difficult in SQL. Easily implement these relationships with a parent-child dimension using Analysis Services MDX.

MSAS Architect Bill Pearson leads hands-on exercises providing exposure to the use of the MEMBER_VALUE intrinsic member property. Join us in generating simple lists, as well as datasets to support report parameter picklists.